Can Environmental Regulation Flexibility Explain the Porter Hypothesis?—An Empirical Study Based on the Data of China’s Listed Enterprises

:
The aim of this study is to assess the possibility of utilizing waste marble dust (WMD) as a partial cement substitution in air-cured mortar (ACM). Three different levels of cement replacement were analyzed: 5%, 10% and 15% by cement weight. The specimens were manufactured in a local laboratory at an air temperature of 22 ± 2 °C and a humidity equal to 20 ± 1%. The chemical and physical properties of ordinary Portland cement and WMD has been found to be the most crucial parameters. A variety of macroscopic tests, such as apparent density, porosity and compressive strength, were proposed in order to explain the effect of utilizing the WMD on the ACM. To confirm the results of the macroscopic properties, thorough microstructural analysis using scanning electron microscopy (SEM) was performed. The obtained results of this study indicate that replacing cement with WMD affects the physical and mechanical properties of air-cured mortar. The apparent density and compressive strength decrease while the porosity increases.
Keywords:
air-cured mortar; waste marble dust; compressive strength; porosity

The leading factor influencing the quality of cement-based composites and their appropriate adherence is ordinary Portland cement. The manufacturing of ordinary Portland cement requires a meaningful consumption of energy [1,2] and the production of enormous greenhouse gas emissions, including carbon monoxide (CO), carbon dioxide (CO2), nitrogen oxides (NOx), black carbon (BC), and sulfur dioxide (SO2) [3], therefore contributing to environmental pollution [4,5]. Global cement production (4.18 billion tones in 2014) is the third biggest source of carbon dioxide emissions [6]. The average value of CO2 intensity emissions from all worldwide cement production is 222 kg of CO2/t of cement [7].
From an economic point of view, it can be seen to be reasonable to replace a part of ordinary Portland cement with waste mineral dust. In addition, this treatment is an environmentally friendly solution [8,9,10]. Due to an excessive amount of very fine particles in dust, the voids in cement-based materials could be thoroughly filled. The particle size and chemical composition of this by-product allow this material to be treated as an attractive additive in cement-based material technology [11].
Marble has been widely used as a building material in the civil engineering industry [12]. During the mining process and in the polishing of marble stone, marble dust is perceived as a waste material [13]. These by-products are present in the environment and contribute to pollution [14,15]. The utilization of marble dust reduces the cost of cement-based material production and also decreases the costs of removing it from the environment [16].
The possibility of using waste materials such as marble dust as a partial substitution in the production of mortar and concrete has often been investigated by researchers [5,17,18,19,20,21,22,23,24,25,26,27,28,29]. Its mechanical properties are the main aspect of the analysis. Consequently, it has been proved that the utilization of waste marble dust (WMD) in cement mortar improves its mechanical and physical properties when subjected to the water-curing condition [10]. The author’s previous study showed that the water-curing condition, when compared to the air-curing condition, was profitable for the acceleration of the hydration rate of cement-based materials blended with WMD dust [30]. However, on real construction sites, cement-based materials are mainly prepared and stored in air conditions (in nature) [10].
Based on the performed literature review, there is no study related to the properties of air-cured mortar containing WMD. To fill this knowledge gap, this research studies the effect of the partial replacement of ordinary Portland cement with WMD on the macro and micro properties of mortars stored at an air temperature equal to 22 ± 2 °C and a relative humidity of 20 ± 1% by determining the compressive strength and apparent density. In addition, scanning electron microscopy (SEM) analysis was also performed to determine the porosity and Si/Ca ratios of ACM after 28 days of being cured.

The following materials were used to manufacture the mortars: ordinary Portland cement CEM I 42.5 R, produced by Biskria ciment, containing 95% clinker with 5% gypsum for the setting regulation. As the partial ordinary Portland cement replacement, waste marble from the aggregate production of marble stone in the CHATT/FilFila quarry of the Skikda region was used. Before use, it was ground to the proper size in order to obtain a WMD fineness in the ordinary Portland cement fineness range (between 3000 to 4000 cm2/g) [30].
Sand from the Biskra region (Oued-Djedi River) with a particle size between 0 and 5 mm was used as fine aggregate. It was first cleaned and fractionated with the use of a sieving machine to receive a 0/2 particle size (Figure 1) according to the standard EN 196-1 [31]. Tap water was used in the manufacturing of the mortars.
Table 1 presents the mineralogical and chemical composition, as well as the physical properties of the ordinary Portland cement, WMD and sand used in the study. Figure 2 presents the X-ray diffraction (XRD) spectrum of these materials.
Figure 3 presents the particle size distributions of WMD that determined using a Malvern Mastersizer 2000 analyzer (liquid: Hydro 2000MU). According to this figure, the particles in WMD smaller than 80 µm, 30 µm and 5 µm represent about 90%, 50% and 10% of the total material volume, respectively [10].

As a partial replacement of the ordinary Portland cement, WMD was used. The replacement levels were 0%, 5%, 10% and 15% by weight of the cement in the mortar. The proportion of the mortar mixtures is shown in Table 2. The mortar mixtures were manufactured with a 3:1 (by mass) sand to cement ratio in accordance with the standard EN 196-1 [31]. The constant 0.5 water to binder ratio was assured according to ASTM C270-14a [32]. The flow test was repeated 3 times for each replacement ratio and determined using the following formula: where:
After determining the flow value for each sample, three prisms with dimensions of 40 × 40 × 160 mm, and three cubes of 50 mm for each replacement ratio, were prepared and then packed to avoid water evaporation. They were then put to cure in standard laboratory conditions at 22 ± 2 °C and a relative humidity of 20 ± 1%. After 24 h, the samples were demolded and left to cure in a standard laboratory with the same conditions. Different tests were performed, such as, apparent density and compressive strength at 3 days, 7 days, 28 days, and 65 days and scanning electron microscopy analysis after 28 of being cured in standard laboratory.
The apparent density was determined according to Kirgiz [33], and the compressive strength was determined according to ASTM C 109/C109 M-9 [34]. Three cubes of 50 mm for each replacement ratio were prepared to measure the average.
The apparent density was determined using the following formula: where:
The compressive strength was determined using the following formula: where:
The scanning electron microscopy analysis was performed after 28 of being cured in standard laboratory on samples extracted from the mid-prisms. These samples were cold-mounted in an epoxy resin and they were wet grinded using abrasive papers to make them flat. After grinding, the samples were polished with diamond paste (with dimensions of 6µm and 1µm). The cleaned samples were covered with a conductive path made of copper tape and they were then carbon coated to obtain electrical conductivity and to prevent electrical charging of the samples. A conductive layer with a thickness of 30 nm was applied in a vacuum of 1.3 × 10−4 Pa (10−6 Torr) with the use of the thermal evaporation method and by using sharpened graphite rods [10]. Finally, the samples can be analyzed using scanning electron microscopy to determine their microstructural properties. The JEOL JSM-6610A microscope with JED-2300 energy-dispersive X-ray spectroscopy (EDX) detector were used.

The flow of mortars containing WMD is presented in Table 3.
Based on the results, it can be stated that with the increase of content, the mortar flow was slightly decreased. The use of WMD in amounts of 5%, 10%, and 15% led to a decrease in the flow by 0.02%, 1.98%, and 2.96% respectively. Due to the small scale of the phenomenon, this decline may be neglected. The results were found to be in the range from 105% to 115%, which complies with ASTM C270-14a [32]. Regarding concrete, a similar observation was noticed in [26]. The authors deduced that the utilization of WMD with a lower fineness does not affect workability. On the other hand, according to [18], the utilization of WMD with a higher fineness in the manufacturing of concrete causes a decrease of workability and an increase of friction.

Based on the experimental results of ACM, the following conclusions may be drawn from the work presented in this paper:
Indeed, the WMD affects negatively the properties of air-cured mortar; however, due to the low solid density of applied WMD compared to the solid density of ordinary Portland cement in construction practice, it may be economically sensible to use of WMD in lightweight cement-based materials used for non-structural elements.

This research received funding from the project no. 0401/0116/18 entitled “Non-destructive and semi-destructive methods of evaluation of the materials, elements and building structures” [“Nieniszczące i seminiszczące metody badania materiałów, elementów i konstrukcji budowlanych”] funded by the Ministry of Science and Higher Education in Poland.

The authors would like to acknowledge the support of the Electron Microscopy Laboratory at Wroclaw University of Science and Technology in Poland for enabling the scanning electron microscopy analysis to be performed. 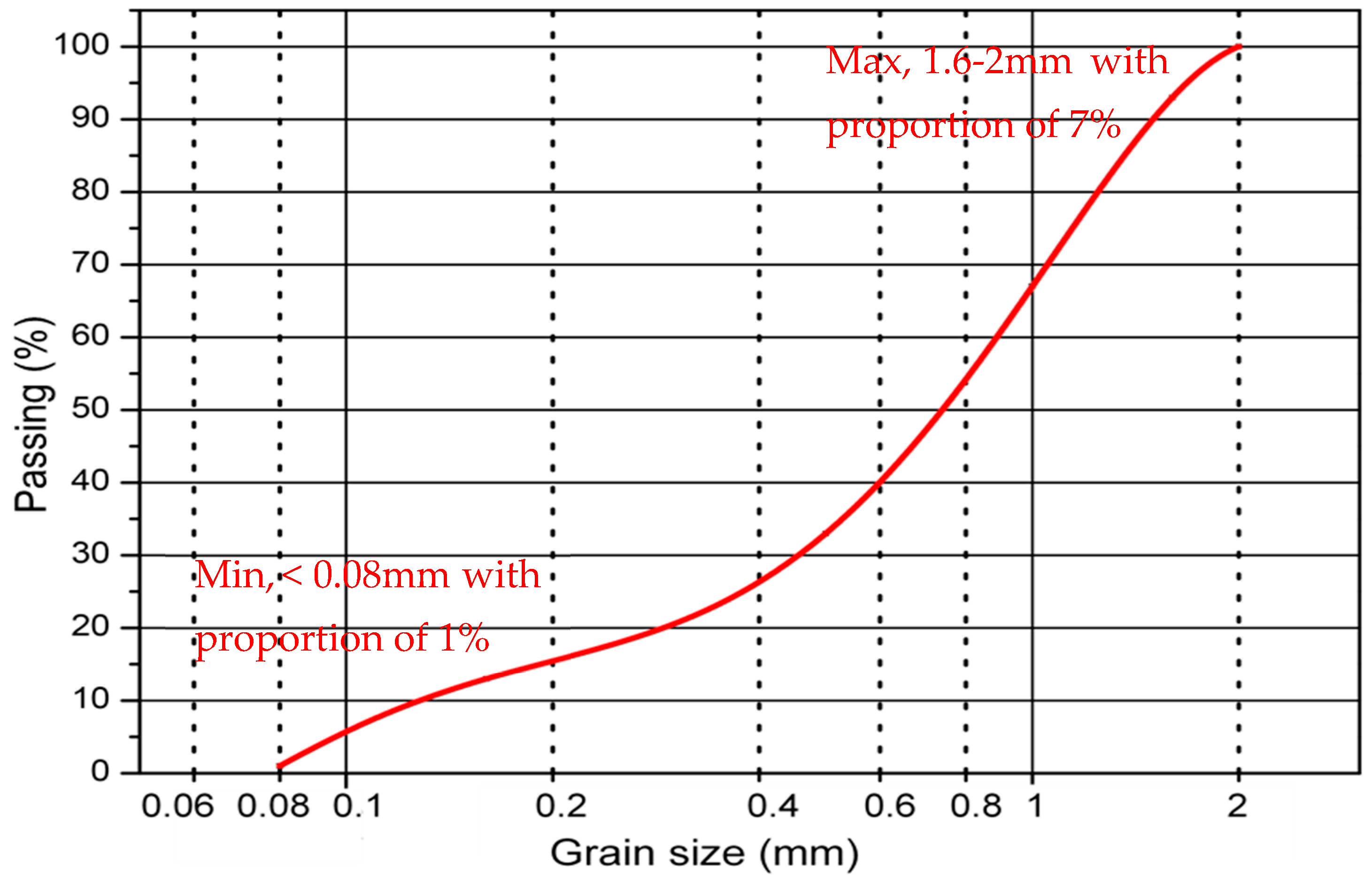 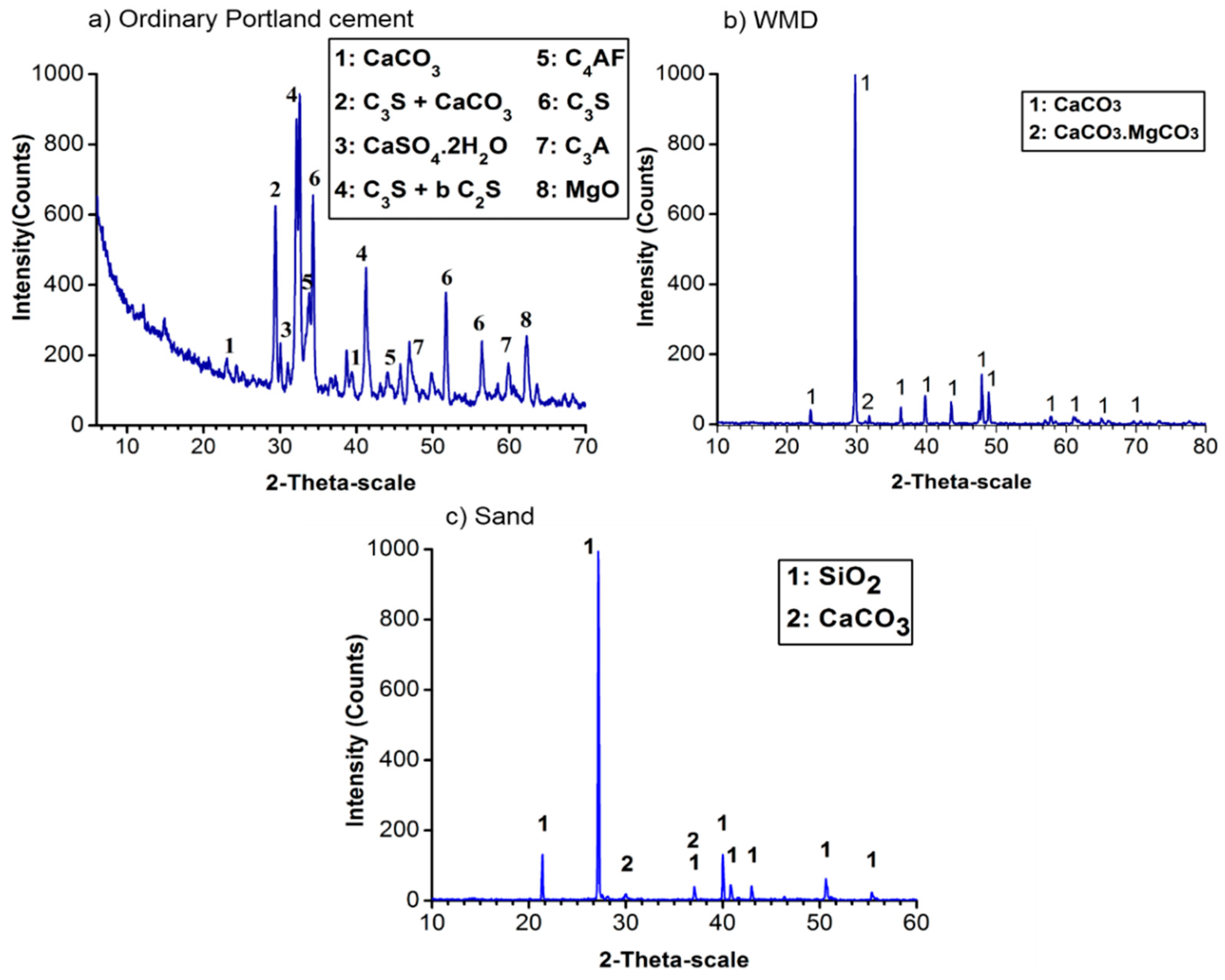 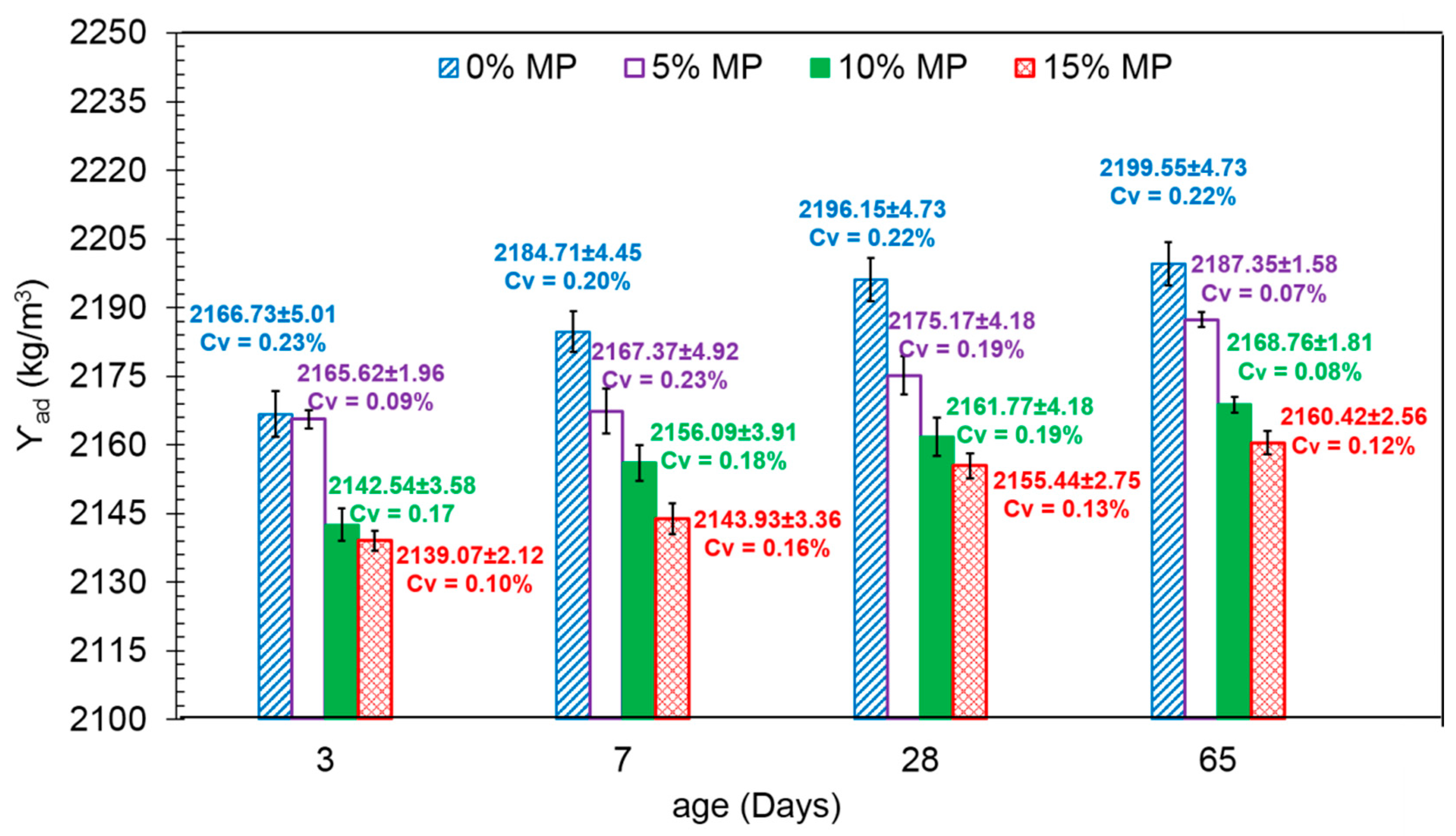 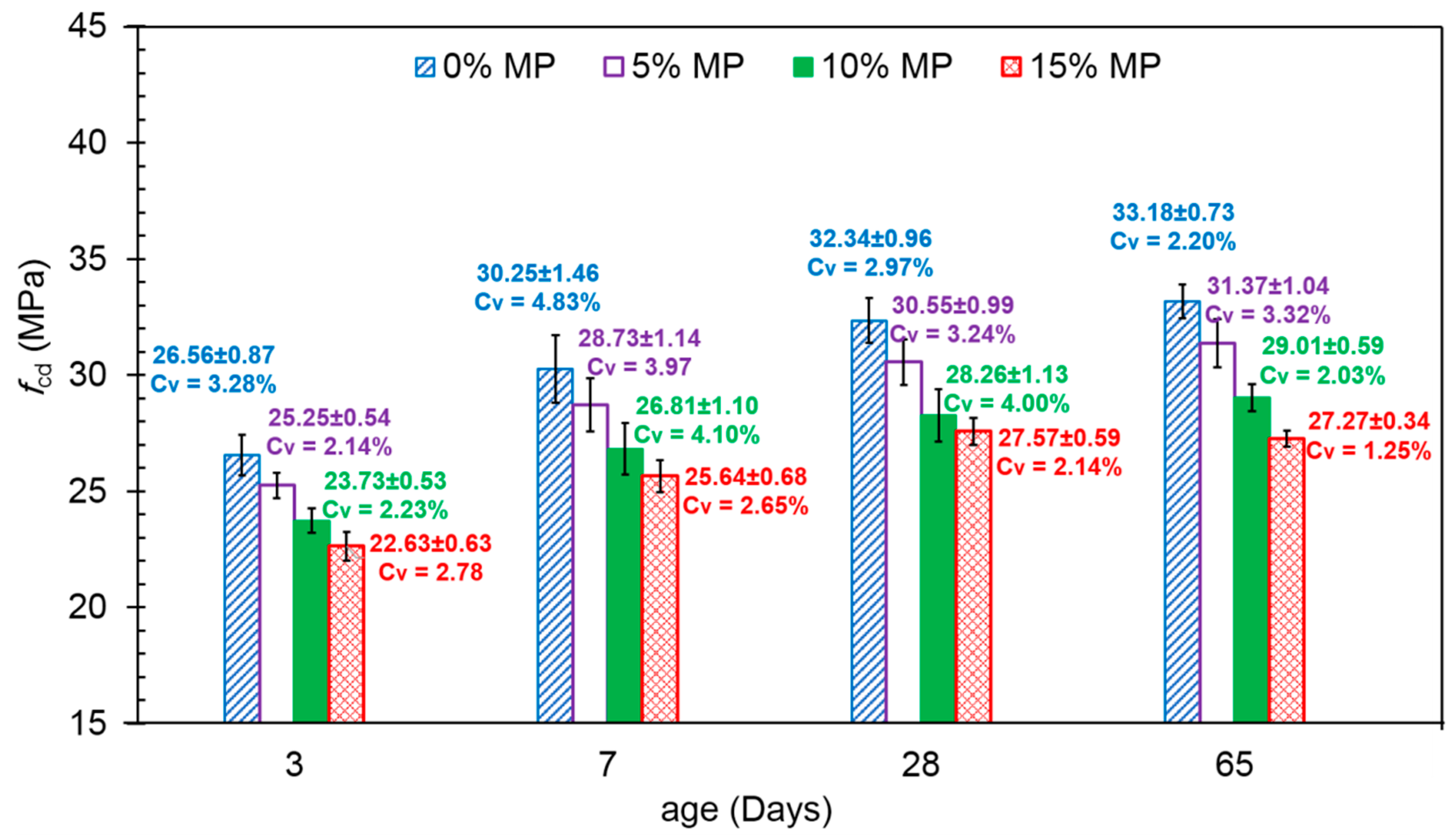 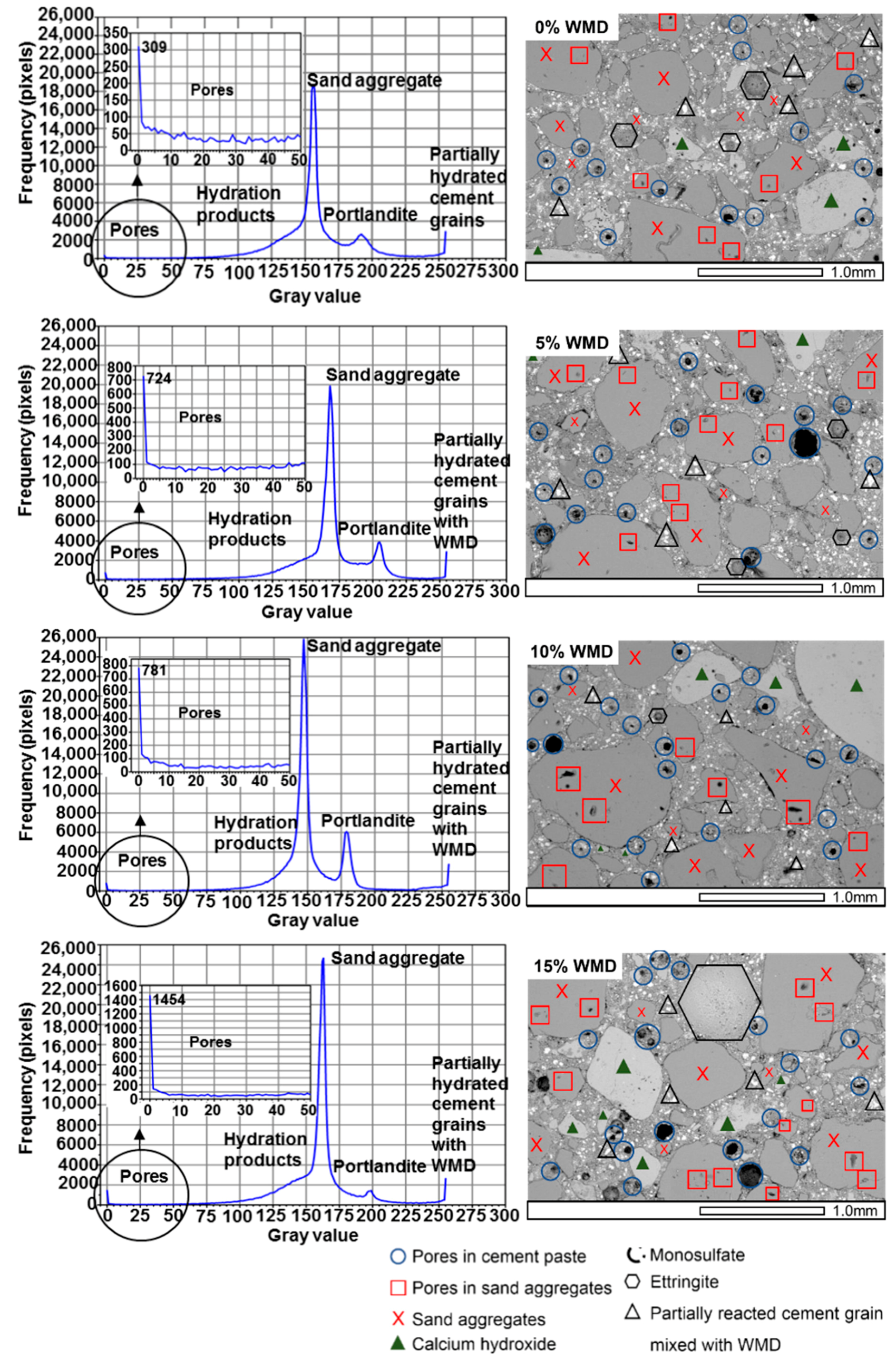 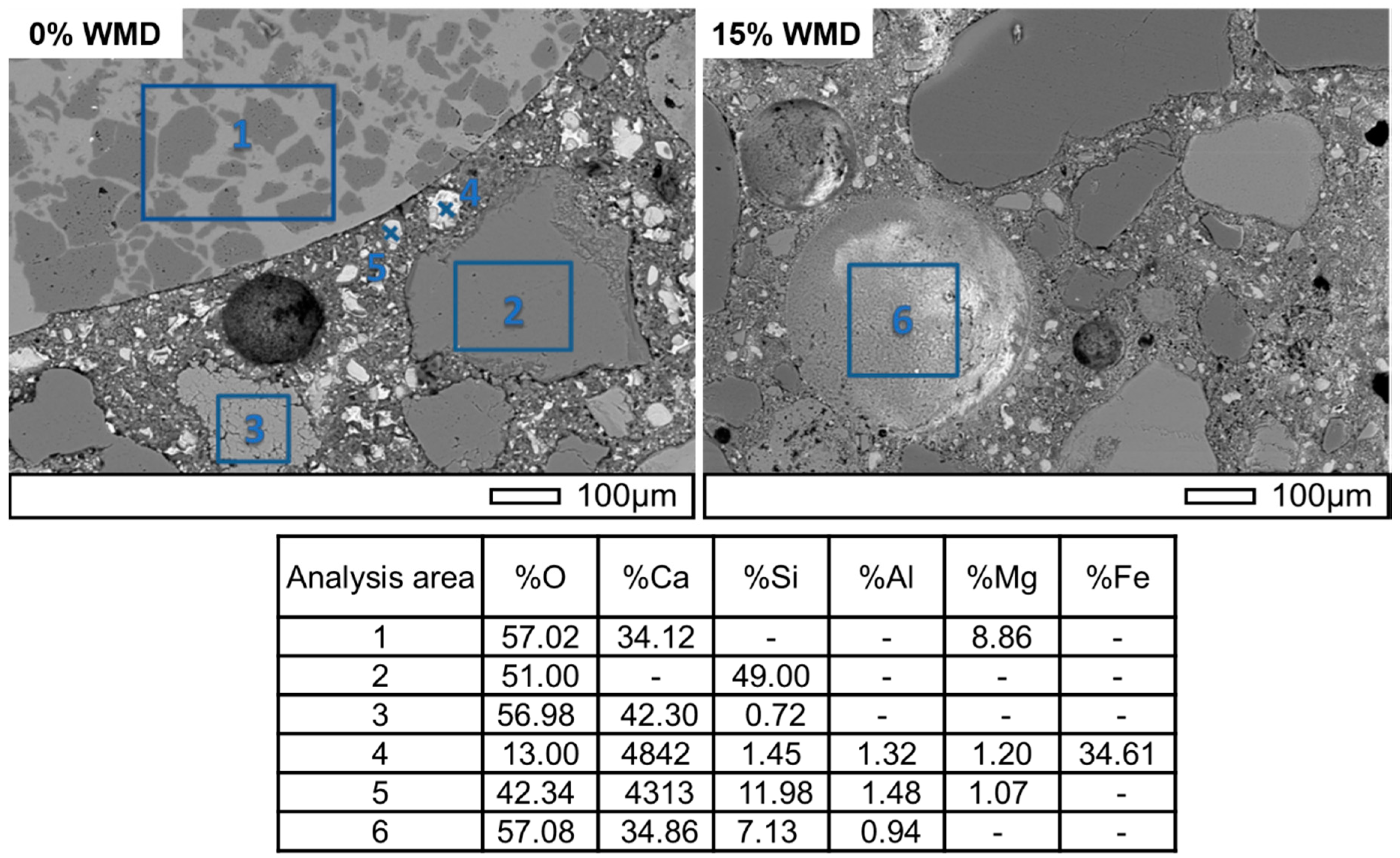 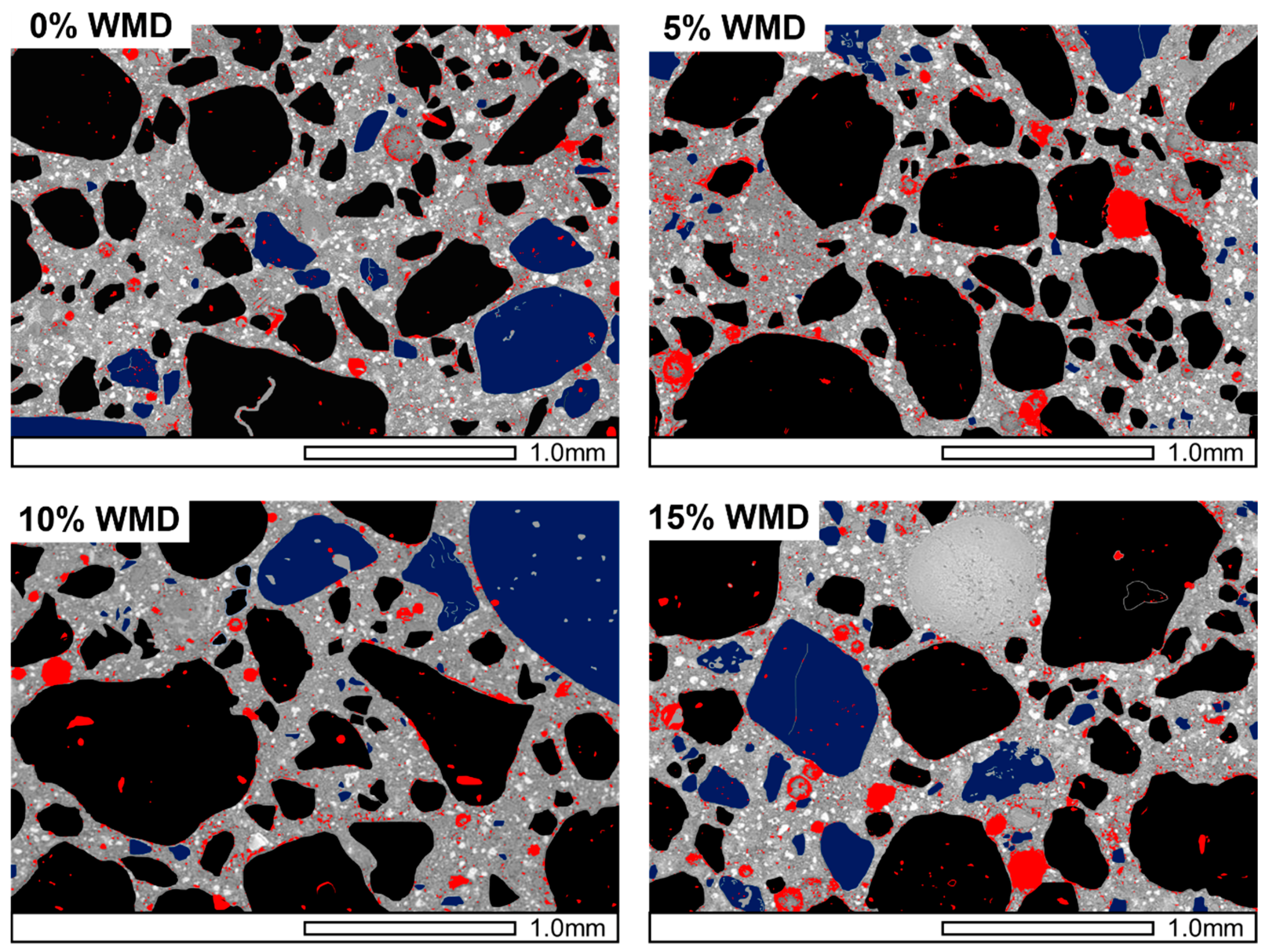