Urban Gardening in Germany: Cultivating a Sustainable Lifestyle for the Societal Transition to a Bioeconomy

There are few studies examining the wellbeing benefits from exposure to natural environments differing in ecological attributes, such as biodiversity, and they have not had consistent results. This study progresses our understanding of the nuanced relationship between nature and wellbeing by analyzing the self-reported benefits derived from urban green spaces varying in a range of objectively measured biodiversity attributes such as bird species richness, habitat diversity, and structural heterogeneity. Respondents’ (n = 840) perceptions of biodiversity and naturalness were also examined. We identified the biodiversity attributes most strongly associated with particular benefits, as well as the types of parks where those benefits were significantly more likely to occur. Findings suggest that perceived, rather than objective measures of biodiversity are better predictors of subjective wellbeing benefits. Of the assessed biodiversity attributes, vegetation cover consistently correlated most strongly with psychological benefits. Stress reduction and mood improvement were greatest in nature parks and lowest in pocket parks. Increases in each biodiversity attribute significantly affected psychological wellbeing at different thresholds, suggesting the relationship between biodiversity and wellbeing is not linear. Thresholds of sensitivity for park attributes are discussed, with vegetation cover, naturalness, structural heterogeneity, and park type emerging as the most useful differentiators for studying human responses to nature. Our findings can help inform green space planning to maximize environmental benefits and health benefits concurrently. View Full-Text
Keywords: Biodiversity; species richness; perceptions; green space; naturalness; wellbeing benefits Biodiversity; species richness; perceptions; green space; naturalness; wellbeing benefits
►▼ Show Figures 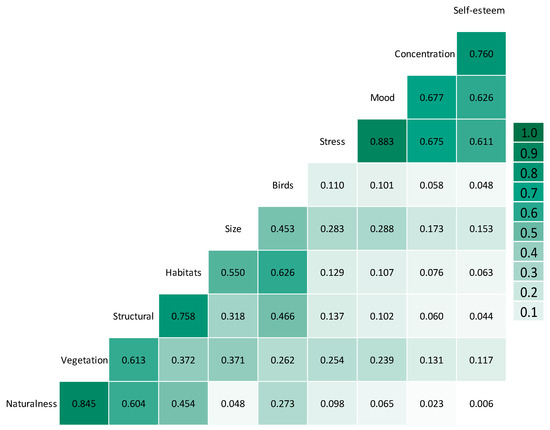