Cooperation, Fair Trade, and the Development of Organic Coffee Growing in Chiapas (1980–2015)

Evolution of Farming Systems in the Mediterranean High Mountain: The Case of the Alpujarra Alta (Spain)

In mountainous Mediterranean areas, even at high elevations, the landscapes are generally strongly transformed by humans. Agriculture is a key factor in this because, until very recent times, farming has been the main occupation of its inhabitants and has dominated their history and culture. This study examines the evolution of agroecosystems in the Alpujarra Alta (a set of mountain valleys and ravines, located in south-eastern Spain, within the Penibetic Range), from the Neolithic revolution and the Roman period until the present emphasizing the eight centuries under Muslim rule and the serious agrarian crisis induced by the expulsion of the Moorish from the area in the last third of the 16th century. This provoked profound transformations leading to the so-called “evolved farming system” in the early nineteenth century. This system continued until the middle of the twentieth century, when a massive rural exodus, prompted by the industrialization of the country, made farming unfeasible, triggering a phase of gradual system degradation. Finally, the current situation is discussed, resulting from the degradation of the established system as well as from new opportunities arising from the processes of endogenous local development induced in the area during the last quarter of a century. View Full-Text
Keywords: agrarian systems; high mountain; Alpujarra Alta; endogenous development; agrarian history; farming evolution agrarian systems; high mountain; Alpujarra Alta; endogenous development; agrarian history; farming evolution
►▼ Show Figures 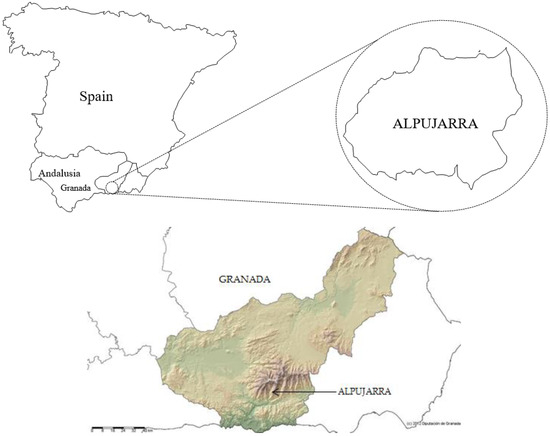