Developing Green: A Case for the Brazilian Manufacturing Industry
Next Article in Special Issue

Influence of Solar Reflectance and Renewable Energies on Residential Heating and Cooling Demand in Sustainable Architecture: A Case Study in Different Climate Zones in Spain Considering Their Urban Contexts

In this research work, energy simulation was used as a forecasting tool in architectural design. It includes the study of a multi-family residential building in five different climate zones of Spain, i.e., A4 (very hot climate zones), B4 (hot climate zones), C4 (moderate climate zones), D3 (cold climate zones), and E1 (very cold climate zones). The authors accomplished a sensitivity analysis in order to identify the influence of passive strategies (i.e., with regard to solar reflectance) and renewable energy (i.e., with regard to aerothermal energy) on indoor temperatures and energy demands. The increment in indoor temperatures depends on the neighboring buildings so that effect of urban contexts as a source of protection against sunlight is also considered. The increment in the albedo (i.e., the solar reflectance) of the façade during the winter period produces little differences in indoor operative temperatures. On the contrary, during the summer period, it produces large temperature differences. Therefore, it is shown that colors significantly reduce temperatures from 1.24 to 3.04 °C, which means considerable annual energy savings. This research demonstrates that solar reflectance can reduce the air indoor operative temperature down to 4.16 °C during the month of May in the coldest climate zones. As a result of the simulations, it is noted that the coldest climate zones are influenced to a greater extent by the inclusion of their urban contexts in the simulations. However, the heating demand, without considering it, becomes lower. Therefore, ignoring the urban context produces important errors in the heating analysis (12.2% in the coldest climate zones) and also in the cooling analysis (39% in the hottest climate zones). Finally, the use of renewable energy in the configuration of a model with a high urban canyon (Hc), as well as with an east–west building orientation and a low albedo produces a difference of around 76% in the cooling costs within the hottest climate zones and around 73% in the heating costs within the coldest climate zones. The results of this study can be applied as a guideline in early architectural design. View Full-Text
Keywords: energy efficiency; solar reflectance; building energy performance; sustainable architecture; energy saving; passive strategies energy efficiency; solar reflectance; building energy performance; sustainable architecture; energy saving; passive strategies
►▼ Show Figures 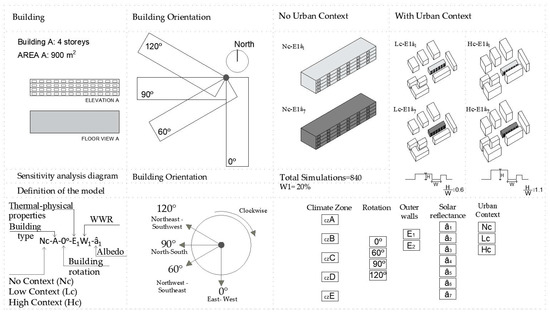