Do Employees Matter in the Relationship between Corporate Social Responsibility and Financial Performance?
Previous Article in Journal

Satisfaction of Basic Psychological Needs: We used the validated and adapted version of the Basic Psychological Needs Scale in Physical Education (BPN-PE; [23]) to the Spanish context of PE by Menéndez and Fernández-Río [22], whose factors are autonomy, competence, and relatedness. The items corresponding to the novelty dimension developed by González-Cutre, et al. [10] were added to this scale. The final scale comprises a total of 18 items distributed among the four factors that make up the scale: four items correspond to autonomy, four correspond to competence, four correspond to relatedness, and six correspond to novelty. It uses a Likert scale, from totally disagree (1) to totally agree (7).
Intrinsic Motivation: We selected a factor with the same name from the Perceived Causality Locus Revised Scale (PLOC-R) by Vlachopoulos et al. [24], which was adapted and validated by Trigueros et al. [25] in the PE context of Spain. The scale was headed by the heading, “During Physical Education (PE) classes...”, and the intrinsic motivation factor consists of 4 items. It uses a Likert scale, from strongly disagree (1) to strongly agree (7).

Once in possession of the final scale (SPN-PE; Appendix A), a member of the research group contacted school principals who wanted to participate in the study. Later, the principals of the participating schools contacted their physical education teachers, who were informed about the objectives of this research and asked for their full cooperation. The parents or legal guardians of the underage students were contacted to sign an authorization document before applying the scales.
A surveyor from the research group was present when the students completed the questionnaire, explaining how they should complete it (i.e., the questionnaires are individual, cannot be copied from peers, and must respond to items in order) and answering any questions that arose during the process. The questionnaires were completed by the students at the beginning of the physical education classes, at different times, depending on their school hours. The questionnaires completed by the students were completely anonymous. The entire experiment was conducted in accordance with the Declaration of Helsinki. This study was approved by the Research Ethics Committee of the University of Almeria, Spain (Reference UALBIO 2019/014). In addition, all the recommendations of the American Psychological Association were carried out.
The questionnaires were administered during the academic year 2018/2019. The estimated time to complete the questionnaires was around 10 min.

In order to be able to analyze the psychometric properties of the new SPN-PE Scale with the incorporation of the eight novelty items, a series of analysis was conducted in order to determine the reliability and validity of SPN-PE Scale. First, the structure of the model was tested by conducting a confirmatory factorial analysis (CFA). Second, the invariability of the questionnaire in relation to gender was evaluated through a multigroup analysis. This analysis was used in order to establish if the questionnaire is interpreted by male and female students in the same way. Then, all descriptive statistics and bivariate correlations were examined, and, through Cronbach’s alpha statistic, the internal consistency of the subscale was analyzed. Intraclass correlations (ICC) were used to evaluate temporal stability. Finally, we developed a linear regression analysis of the four factors that compose the SPN-PE Scale, with respect to the intrinsic motivation toward the PE classes, in order to know the instrument predictability. In order to carry out these analyses, the statistical packages SPSS 25.0 and AMOS 20.0 were used.
The bootstrapping procedure was used in combination with the maximum likelihood estimation method in the CFA, given that the value of the Mardia coefficient (317.20). In this case, the estimators were considered robust despite the lack of normality [26]. The fit indexes followed to accept or reject the proposed models are as follows [27]: The ratio between the chi-square value and the degrees of freedom (χ2/df), whose value must be less than 3; the comparative fit index and incremental fit index, whose value must be equal to or greater than 0.9; the standardized root mean square residual, whose value must be equal to or less than 0.06; finally, the root mean square error of approximation plus confidence interval (CI), whose value must be equal to or less than 0.06.

3.2. Analysis of Gender and Age Invariance

Table 3 shows the descriptive statistics, reliability analysis (Cronbach’s alpha), and bivariate correlations.
Cronbach’s alpha values were 0.85 for relatedness, 0.81 for novelty, 0.91 for competence, 0.87 for autonomy, and 0.82 for intrinsic motivation. For the global factor called satisfaction, Cronbach’s alpha was 0.93.
Intraclass correlation coefficients (ICCs) and confidence intervals (CIs) were used to conduct the temporal stability analysis. These analyses were performed with an independent sample that completed the questionnaire on two separate occasions. Temporal stability was supported for each of the SPN-PE Scale factors, including competence = ICC of 0.93 (CI = 0.90 − 0.89); autonomy = ICC of 0.92 (CI = 0.91 − 0.93); relatedness = ICC of 0.91 (CI = 0.90 − 0.92); and novelty = ICC of 0.85 (CI = 0.82 − 0.87).

A linear regression analysis was performed in order to assess the criteria validity of the SPN-PE Scale in PE classes (see Table 4). In this way, the dependent variable was the intrinsic motivation, and autonomy, competence, relatedness, novelty, and global factor (satisfaction) as an independent variable. The results showed that factors significantly predicted intrinsic motivation with a positive regression weight and provided an explained variance of 51%.

The objective of the present study was to examine the psychometric properties of SPN-PE Scale. Based on the established cut-off points [27], the results suggested that SPN-PE Scale has an appropriate factorial structure. Furthermore, Cronbach’s alpha analysis revealed that all factors are reliable, given that his score was above 0.70, this being the lowest criterion [29]. Thus, there is an effective tool to help researchers understand and analyze the predictive effects of psychological needs on the positive and negative consequences for the overall development of adolescents at the physical, psychological, and emotional level [23].
The CFA revealed that the factor structure of the SPN-PE Scale had adequate adjustment indices, both for the four-factor model and for the higher-order model. These results are in concordance with the postulates of SDT, since the sub-theory of basic psychological needs defends the existence of a group of psychological needs that are interrelated with each other, which also has the incorporation of novelty as a psychological need, continuing the line of previous studies (e.g., [10,23,30,31]). As for the reliability analyses and temporal stability analysis, they revealed acceptable adjustment indices for the four subscales (i.e., autonomy, competition, relationship with others, and novelty). In addition, the present study revealed a high correlation between the factors that make up the scale, but without achieving overlap between the factors.
In relation to the higher-order model, satisfaction, the factorial structure was supported through a CFA. This model is interesting because it suggests the use of a global value composed by the mean of the four factors, which allows researchers to use it in order to simplify models where several constructs are present. Furthermore, its use is justified since the study conducted by Gagné, Ryan and Bargmann [32] suggested that needs tend to function as a single “factor” in different situations. Multigroup analyses showed that the structure of the four-factor and higher-order model of the SPN-PE Scale was invariant with respect to gender and age. These results support the use of the questionnaire in future research where it is intended to compare the means between boys and girls by understanding both groups in a similar way to the axioms of the questionnaire.
For linear regression analysis, evidence of predictive validity of SPN-PE Scale was found. The analysis suggested that PE students with high levels of intrinsic motivation rated higher in the overall value of satisfaction, as well as in the factors linked to competence, autonomy, and relatedness, with no predictive evidence with the relatedness. These results are shown in line with several previous studies in which intrinsic motivation was positively predicted by the satisfaction of psychological needs [33,34]. In addition, these results support the postulates of SDT proposed by Deci and Ryan [35], where the satisfaction of psychological needs can result in the development of positive adaptive behaviors that result in the promotion of personal well-being.
Finally, the results obtained in the present study, through the various analyses carried out, have shown that the SPN-PE Scale is in line with the original scale of Menéndez and Fernández-Río [22], incorporating into the scale a fourth psychological need called novelty. Therefore, the present scale procures conceptual validity (see, Menéndez and Fernández-Río [22]; Vlachopoulos, Katartzi, and Kontou [23]) to the detriment of the scale traditionally used in the Spanish context (see, Moreno, González-Cutre, Chillón, and Parra [17]; Vlachopoulos and Michailidou [36]). Furthermore, the present scale gives the Menéndez and Fernández-Río scale as an instrument of greater applicability, to investigate the three psychological needs, together with the fourth psychological need (novelty), so that these results comply with a greater adaptability and reproduction to other educational and sociodemographic environments worldwide.

The SPN Scale toward the context of PE in Spain has shown evidence of reliability and validity. In this way, education professionals have an effective instrument to measure the satisfaction of students’ psychological needs during PE classes.
However, future researchers should analyze the factor structure of the questionnaire with different student populations, with the aim of improving the tool available and analyzing with the psychological processes present toward PE, using greater criteria. In addition, future studies should analyze the structure of invariance with respect to other variables, academic level, or type of center (e.g., private, concerted, or public). Finally, the predictability of the scale should be explored with respect to other variables, for example, body mass index and self-esteem. 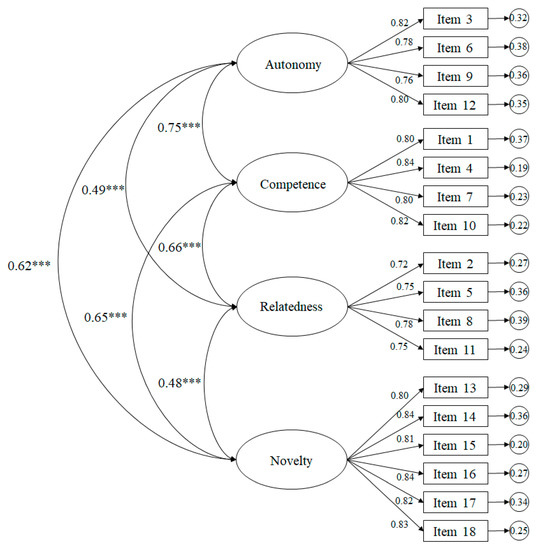 Table 4. Linear regression analysis.
Table 4. Linear regression analysis.
Note: *** p < 0.001; ** p < 0.01; * p < 0.05.
© 2019 by the authors. Licensee MDPI, Basel, Switzerland. This article is an open access article distributed under the terms and conditions of the Creative Commons Attribution (CC BY) license (http://creativecommons.org/licenses/by/4.0/).
We use cookies on our website to ensure you get the best experience. Read more about our cookies here.
Accept
We have just recently launched a new version of our website. Help us to further improve by taking part in this short 5 minute survey here. here.
Never show this again