Spatial Differences in China’s Population Aging and Influencing Factors: The Perspectives of Spatial Dependence and Spatial Heterogeneity
Next Article in Special Issue

As a clean and renewable energy source, hydropower meets the growing energy needs of mankind while mitigating global warming trends [1]. Hydropower continues to grow worldwide, especially in developing countries, such as China [2]. However, large-scale hydropower development and construction has also brought controversies [3,4,5,6,7], such as the effects on the water environment and the changes to the river hydrological, including runoff, flood peak flow, water temperature [8]; effects on the ecological environment, such as migratory fish breeding [9], environmental flow [10], and ecological compensation [11,12,13]; effects on the social environment, such as immigration issues and land occupation issues [14]. In addition, the risk and the environmental impact of dam break are not negligible [15,16]. The traditional water resource index “water intake” can no longer truly measure the water consumption of hydropower stations and their positive and negative impacts on the environment, ecology, and society. Therefore, how to objectively measure the comprehensive performance of cascade hydropower development is a difficult problem [17].
The water footprint (WF) is a method to quantify the water consumption of hydropower stations and reservoirs and to assess the increasing pressure on local water resources considering the water surface evaporation of the reservoir (i.e., blue water footprint) [18,19]. The water footprint concept is based on virtual water, proposed by Dutch scholar Hoekstra in 2002 and is an indicator of water use by consumers or producers, including direct and indirect water use [20]. The water footprint consists of three parts: green water (soil water), blue water (surface water and groundwater), and grey water (polluted water).
The product water footprint (PWF) of hydropower plants characterizes the water consumption per unit of electricity production. There are three main calculation methods, which are the gross water consumption method, the net water consumption method, and the water balance method [21,22,23,24,25], respectively, involving spatial scales such as the world, countries, and river basins. For example, Mekonnen et al. [23] calculated the PWF of hydropower plants on a global scale using the total water consumption method, and the PWF ranges from 0.3 to 850 m3GJ−1, and the average PWF is 68 m3GJ−1. The calculation accuracy is questionable because only 35 hydropower stations were selected for the whole world. Herath et al. [24] used the water balance method to calculate the PWF of 17 hydropower stations in New Zealand, and the calculated results range from −2.80 to 19.80 m3GJ−1. However, WF is an indicator for quantifying the use of freshwater, and there should be no negative values. Therefore, the water balance method is not suitable for calculating the PWF.
Primary energy plays an important role in the primary stage of the energy supply chain, including raw coal, crude oil, natural gas, biomass, hydropower, nuclear energy, wind energy, and solar energy. These energy development and utilization processes have different levels of consumption of water resources. Gerbens-Leenes et al. [26] estimated the biomass water footprint of four countries (the Netherlands, the United States, Brazil, and Zimbabwe) with an average of 72 m3GJ−1, which is the largest energy source in primary energy consumption. Gleick [27] estimated raw coal, crude oil, natural gas, nuclear energy, wind energy, and solar water footprint. The wind power water footprint is negligible, and the value is 0 m3GJ−1. Monthly blue water scarcity in the basin is defined as the ratio of the total blue WF of the basin over the month to the available blue WF [28]. Currently, there are various monthly water scarcity studies for specific river basins (Heihe River Basin [29] and Yellow River Basin [19] in China), national-level (China [18] and Morocco [30]), transboundary-level [31], and global-level [28]. However, those studies paid less attention to water consumption and accumulated blue water scarcity at different phases of the development and utilization of cascade hydropower stations in the basin.
Based on the water footprint method, this paper takes the Yalong River Basin as the research object, considers the four phases of hydropower development in the basin, calculates the PWF and the blue water scarcity, analyzes its influencing factors, and evaluates the cumulative environmental effects of hydropower stations (The relationship between the degree of hydropower development and utilization in the basin and the environment).

The Yalong River is the largest tributary of the Jinsha River in China, with a total length of 1571 km, natural drop of 3830 m, annual runoff of 60.9 billion m3, drainage basin area of approximately 136,000 km2, and the average annual precipitation of 500 to 2470 mm. The temperature in the basin increases from north to south, and the average annual temperature is −4.9 to 19.7 °C. The average annual relative humidity is not much different, and the downstream is slightly higher than the upstream [32].
The basin is rich in hydropower resources, which is one of the thirteen state hydropower bases in China. According to the comprehensive planning of the river basin, the Yalong mainstream planning is divided into four stages, namely the established phase I (5 hydropower stations, which are Jinping I, Jinping II, Guandi, Ertan, and Tongzilin), the ongoing phase II (2 power stations, which are Lianghekou and Yangfanggou), the proposed phase III (5 power stations, which are Yagen I, Yagen II, Lenggu, Mengdigou, and Kara) and the planning phase IV (7 power stations, which are Muluo, Renda, Linda, Lean, Xinlong, Gongke, and Jiaxi), which can develop 19 large and medium-sized cascade hydropower stations with good reservoir regulation performance and an installed capacity of about 30 million kW (Table 1). The key parameters and locations of the 19 cascade hydropower stations and the locations of 5 evaporation stations are shown in Table 1 and Figure 1.

We are grateful to the anonymous reviewers for their constructive comments and helpful suggestions. 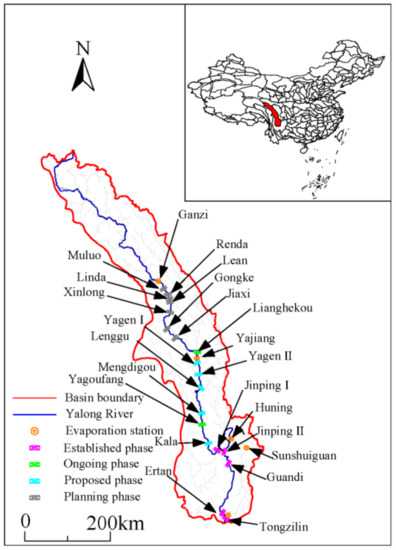 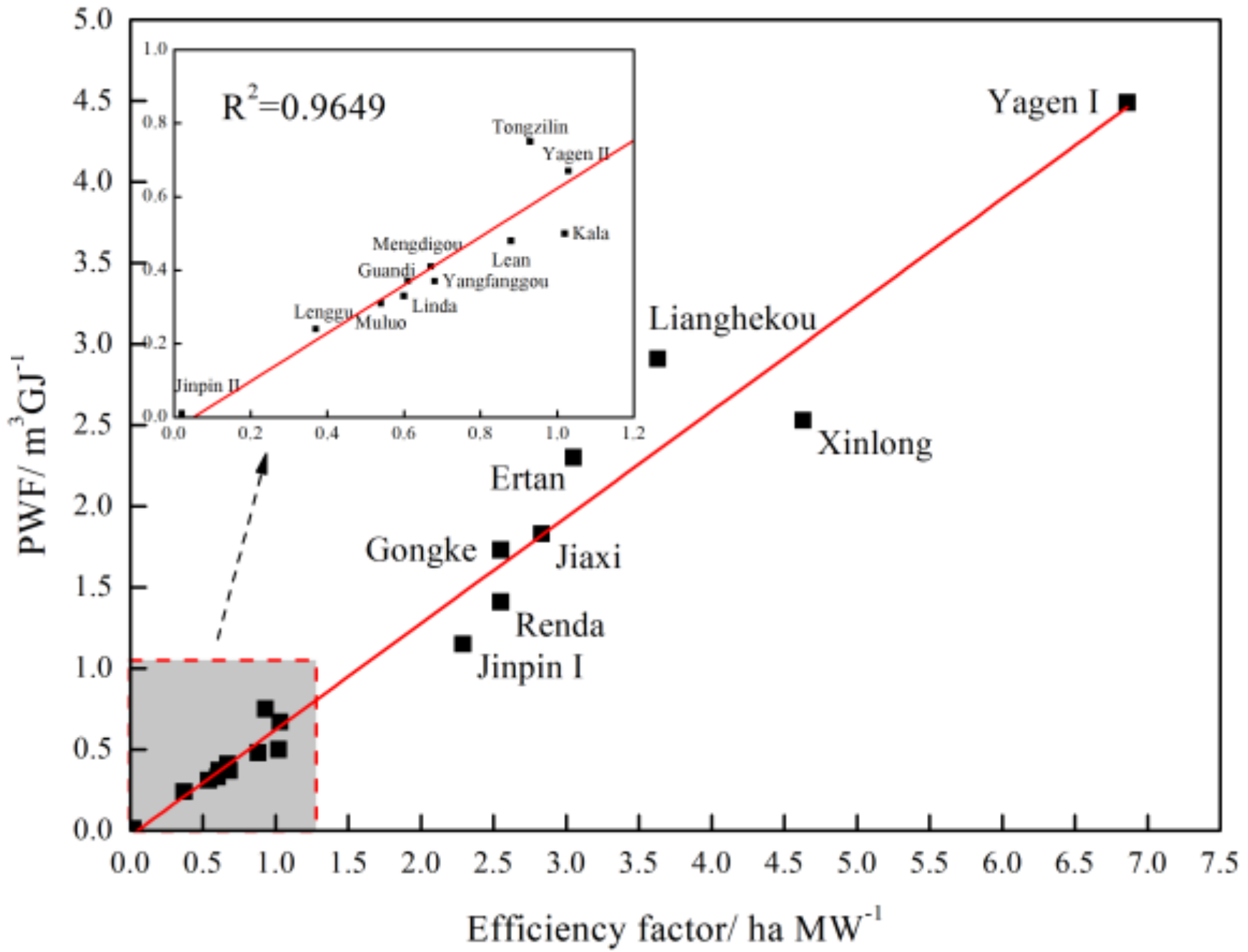 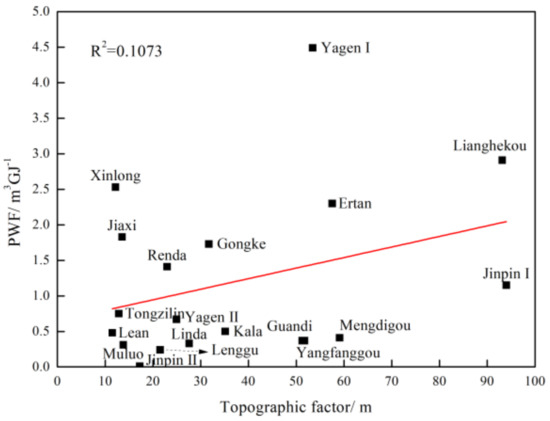 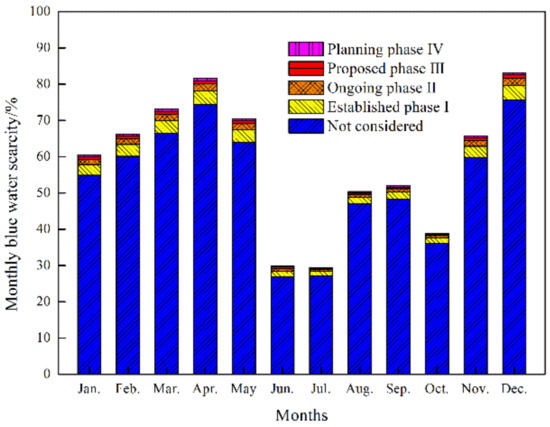