Optimization of Metro Passenger Organizing of Alighting and Boarding Processes: Simulated Evidence from the Metro Station in Nanjing, China

The Driverless Bus: An Analysis of Public Perceptions and Acceptability

The development of autonomous vehicles (AVs) holds a high potential for improving security, reducing congestion, increasing fuel efficiency, and saving time. Various studies conducted on the implementation of AVs predict that fully autonomous vehicles will be available for the public in the 2020s. However, it will take another three decades, at least, for these vehicles and technologies to be accepted among the general masses and become reliable and affordable for use. Nonetheless, while a great deal has been stated regarding autonomous cars, little attention has been paid to autonomous public transport, more specifically, autonomous buses (ABs). The present report analyzed the psychological barriers preventing the complete implementation of ABs through data collected from focus group (FG) discussions. The main objective of the FGs was to determine the factors influencing perceptions regarding ABs and their acceptability. The most important factors from the positive side were the reduction of personnel costs, the potential to decrease congestion, waiting time at intersections, and reduced emissions. On the other hand, the most important negative factors were an increase in vehicle and infrastructure costs, safety risks under certain conditions (e.g., system failures, terrorist attacks, etc.), and the possible reduction of employment opportunities. View Full-Text
Keywords: autonomous vehicles; driverless buses; acceptability; focus group; barriers autonomous vehicles; driverless buses; acceptability; focus group; barriers
►▼ Show Figures 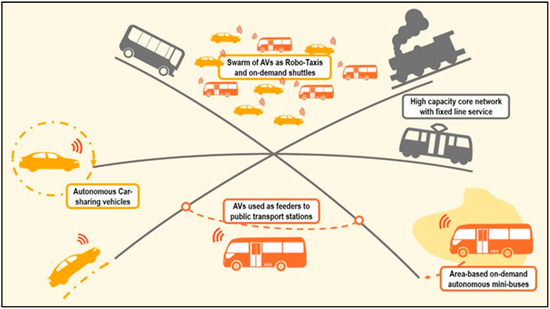