Agricultural Land Abandonment and Farmers’ Perceptions of Land Use Change in the Indus Plains of Pakistan: A Case Study of Sindh Province
Next Article in Special Issue

Ali A. Aldosari 4 and

Soil sealing is currently one of the most critical barriers to sustainable development, particularly in developing countries such as Egypt. Agriculture is a major component of the Egyptian economy and the country’s main source of food security. Urbanization is devouring vast areas of agricultural land, and therefore, in the present study, urbanization was used to determine the degree of soil sealing in a region of Kafr El Sheikh Governorate, Egypt. In this work, remote sensing data were used to monitor changes in land use and land cover (LULC) between 1984 and 2016. A field survey and population data were also used in the analysis. Support vector machine (SVM) classification was used to produce LULC maps of the study area. An accuracy assessment was performed by calculating overall accuracy and individual kappa coefficients. Additionally, soil sealing was assessed using data from 1984 to 2016, and the potential expansion of soil sealing until 2048 was simulated using the cellular automata (CA)–Markov model. Our analysis showed that in the study area (i) about 90% of the soils had soil capability degrees between class II and class III; (ii) soil sealing was not uniformly distributed in the study area; (iii) between 1984 and 2016, the area of soil sealing in fertile soils due to urbanization increased by 19,500 hectares; and (iv) between 1984 and 2000, the urban area increased by around 29%, whereas between 2000 and 2010 it increased by around 43.6%. The results suggest that the magnitude of soil sealing is a good indicator of the soil loss rate and the potential for agricultural development in the Nile Delta. The model predicted that by 2048 an area of 32,290 hectares of agricultural soil will be lost to urbanization. This study indicates that the change of LULC has a negative impact on soil sealing. Between 2000 and 2010, the area of agricultural land decreased by 4%, despite an increase in land reclamation in the north of the study area. The amount of soil sealing was found to increase towards the southeast and northeast of the study area, except for the northern parts, where the amount of soil sealing increased towards the east. Our analyses and forecasts are useful for decision-makers responsible for soil-sealing mitigation strategies and soil-sealing protection plans in the Kafr El Sheikh Governorate, Egypt. View Full-Text
Keywords: simulation modeling; sustainable development; land use changes; remote sensing; GIS simulation modeling; sustainable development; land use changes; remote sensing; GIS
►▼ Show Figures 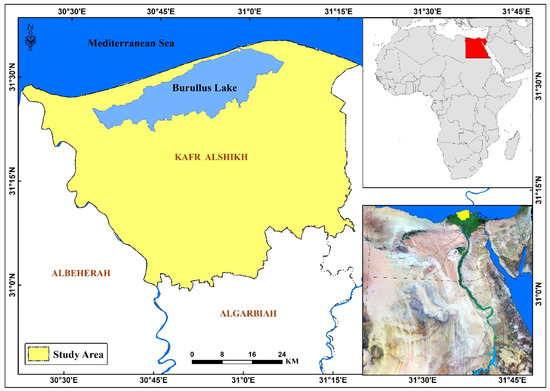