Congestion, Road Safety, and the Effectiveness of Public Policies in Urban Areas
Previous Article in Journal

How Can Teachers Be Encouraged to Commit to Sustainability? Evaluation of a Teacher-Training Experience in Spain
Previous Article in Special Issue

The urban transport sector has become one of the major contributors to global CO2 emissions. This paper investigates the driving forces of changes in CO2 emissions from the passenger transport sectors in different cities, which is helpful for formulating effective carbon-reduction policies and strategies. The logarithmic mean Divisia index (LMDI) method is used to decompose the CO2 emissions changes into five driving determinants: Urbanization level, motorization level, mode structure, energy intensity, and energy mix. First, the urban transport CO2 emissions between 1960 and 2001 from 46 global cities are calculated. Then, the multiplicative decomposition results for megacities (London, New York, Paris, and Tokyo) are compared with those of other cities. Moreover, additive decomposition analyses of the 4 megacities are conducted to explore the driving forces of changes in CO2 emissions from the passenger transport sectors in these megacities between 1960 and 2001. Based on the decomposition results, some effective carbon-reduction strategies can be formulated for developing cities experiencing rapid urbanization and motorization. The main suggestions are as follows: (i) Rational land use, such as transit-oriented development, is a feasible way to control the trip distance per capita; (ii) fuel economy policies and standards formulated when there are oil crisis are effective ways to suppress the increase of CO2 emissions, and these changes should not be abandoned when oil prices fall; and (iii) cities with high population densities should focus on the development of public and non-motorized transport. View Full-Text
Keywords: CO2 emissions; urban transport; LMDI; megacity CO2 emissions; urban transport; LMDI; megacity
►▼ Show Figures 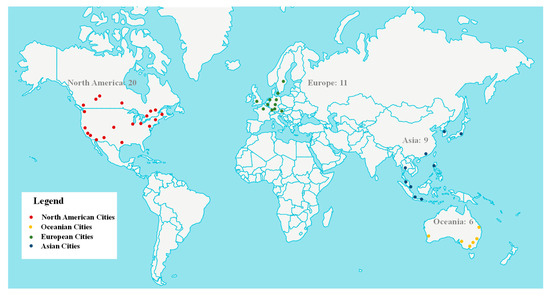