Heatwave Trends and the Population Exposure Over China in the 21st Century as Well as Under 1.5 °C and 2.0 °C Global Warmer Future Scenarios
Next Article in Special Issue

Exploring the Development of Research, Technology and Business of Machine Tool Domain in New-Generation Information Technology Environment Based on Machine Learning
Previous Article in Special Issue

Developing a Framework for the Implementation of Landscape and Greenspace Indicators in Sustainable Urban Planning. Waterfront Landscape Management: Case Studies in Gdańsk, Poznań and Bristol

Enhancing Health Through Access to Nature: How Effective are Interventions in Woodlands in Deprived Urban Communities? A Quasi-experimental Study in Scotland, UK

High prevalence of poor mental health is a major public health problem. Natural environments may contribute to mitigating stress and enhancing health. However, there is little evidence on whether community-level interventions intended to increase exposure to natural environments can improve mental health and related behaviours. In the first study of its kind, we evaluated whether the implementation of a programme designed to improve the quality of, and access to, local woodlands in deprived communities in Scotland, UK, was associated with lower perceived stress or other health-related outcomes, using a controlled, repeat cross-sectional design with a nested prospective cohort. Interventions included physical changes to the woodlands and community engagement activities within the woodlands, with data collected at baseline (2013) and post-intervention (2014 and 2015). The interventions were, unexpectedly, associated with increased perceived stress compared to control sites. However, we observed significantly greater increases in stress for those living >500 m from intervention sites. Visits to nearby nature (woods and other green space) increased overall, and moderate physical activity levels also increased. In the intervention communities, those who visited natural environments showed smaller increases in stress than those who did not; there was also some evidence of increased nature connectedness and social cohesion. The intervention costs were modest but there were no significant changes in quality of life on which to base cost-effectiveness. Findings suggest factors not captured in the study may have contributed to the perceived stress patterns found. Wider community engagement and longer post-intervention follow-up may be needed to achieve significant health benefits from woodland interventions such as those described here. The study points to the challenges in evidencing the effectiveness of green space and forestry interventions to enhance health in urban environments, but also to potential benefits from more integrated approaches across health and landscape planning and management practice. View Full-Text
Keywords: Natural environment; mental health; stress; deprived urban communities; quasi-experimental; natural environment interventions; forestry; woodlands; community forest management Natural environment; mental health; stress; deprived urban communities; quasi-experimental; natural environment interventions; forestry; woodlands; community forest management
►▼ Show Figures 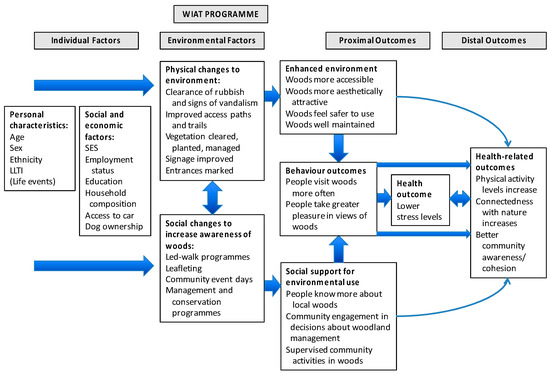