The Long-term Sustainability of Lean as a Management Practice: Survey Evidence on Diffusion and Use of the Concept in Norway in the Period 2015–2017

Even though Lean is a management concept with roots stretching back several decades, it did not take off on a large scale in Norway until around 2010. Since then, Lean has received frequent attention in the Norwegian media, and recent surveys indicate that the diffusion and popularity of Lean can be considered relatively high in both the private and public sectors. This article focuses on the sustainability of Lean as a management practice in Norway. The Google dictionary defines the term “sustainability” as “the ability to be maintained at a certain rate or level.” The article therefore seeks to examine the evolution in the diffusion and use of the Lean concept in Norway in the period 2015–2017. For this purpose, we draw on data from two surveys administered in 2015 and 2017, as well as a small number of follow-up interviews carried out in 2017. The results generally show that the diffusion rate in Norway appears to be relatively stable, and Lean users appear to have a very positive perception of the concept, which indicates that the Lean concept currently has an institutionalised position as a management practice in Norway. Therefore, the evolution pattern of Lean in Norway differs from what has been observed in other countries where the concept appears to be on a downward trajectory in terms of its popularity. Moreover, the results reveal considerable variation in terms of how Lean is interpreted, understood and used in practice, for instance, when it comes to abstraction levels and the use of different Lean-related principles and tools. Overall, the results have several theoretical and methodological implications for future studies on the diffusion, use and long-term sustainability of popular management concepts such as Lean. View Full-Text
Keywords: lean; management concept; diffusion; use; sustainability; management practice; popularity lean; management concept; diffusion; use; sustainability; management practice; popularity
►▼ Show Figures 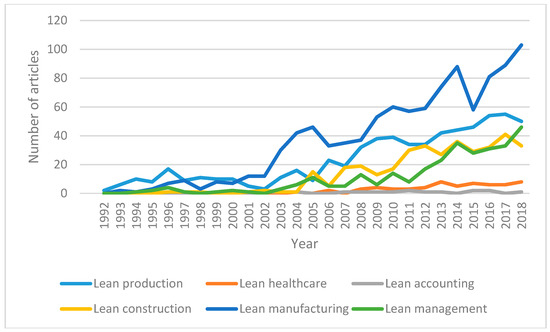 
Madsen DØ, Berg T, Stenheim T, Moum JV, Bordewich IO, Storsveen M. The Long-term Sustainability of Lean as a Management Practice: Survey Evidence on Diffusion and Use of the Concept in Norway in the Period 2015–2017. Sustainability. 2019; 11(11):3120.