Over-Agglomeration and Its Effects on Sustainable Development: A Case Study on Istanbul
Previous Article in Journal

Phosphate (P) fertilisers produced from waste recycling (e.g., struvite) are considered to be more sustainable than those conventionally produced from the processing of rock P (e.g., highly soluble triple superphosphate, TSP). In this study, we used 33P to monitor struvite dissolution and P diffusion into the soil in comparison to TSP. We evaluated three distinct chemical formulations of struvite, namely: (1) Crystal Green® (CG) produced in an industrial process from sewage sludge; (2) natural struvite (NS) precipitated in swine manure pipelines; and (3) laboratory precipitated struvite (PS) from chicken manure by a new process of P recovery. P diffusion was evaluated in soil columns over a 21-day period. This was complimented with a pot experiment in which wheat and soybean were cultivated in a Eutric Cambisol for 38 days in the presence of either struvite or TSP. P fertilisers were applied at a dose equivalent to 17.5 kg P ha−1 and fertiliser solubility determined by recovering soil solution. All three types of struvite tested showed reduced P solubility and mobility relative to TSP, but a comparison of the three struvites has shown that their P solubilities differed by a factor of two, with the greatest P release (up to 85% of total P) obtained from a struvite recovered from poultry manure and containing other useful nutrients (K, S and Ca). All struvites enhanced crop growth and P uptake of wheat and soybean relative to a nil P control, with up to 80% P recovery compared to TSP. These results further support the more widespread use of struvite as a sustainable source of P to plants despite its low water solubility. View Full-Text
Keywords: struvite; nutrient use efficiency; fertiliser dissolution; sustainable agriculture struvite; nutrient use efficiency; fertiliser dissolution; sustainable agriculture
►▼ Show Figures 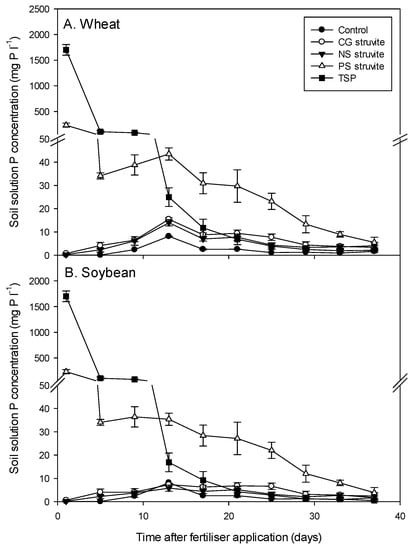