Data mining plays a critical role in sustainable decision-making. Although the k-prototypes algorithm is one of the best-known algorithms for clustering both numeric and categorical data, clustering a large number of spatial objects with mixed numeric and categorical attributes is still inefficient due to complexity. In this paper, we propose an efficient grid-based k-prototypes algorithm, GK-prototypes, which achieves high performance for clustering spatial objects. The first proposed algorithm utilizes both maximum and minimum distance between cluster centers and a cell, which can reduce unnecessary distance calculation. The second proposed algorithm as an extension of the first proposed algorithm, utilizes spatial dependence; spatial data tends to be similar to objects that are close. Each cell has a bitmap index which stores the categorical values of all objects within the same cell for each attribute. This bitmap index can improve performance if the categorical data is skewed. Experimental results show that the proposed algorithms can achieve better performance than the existing pruning techniques of the k-prototypes algorithm. View Full-Text
Keywords: clustering; spatial data; grid-based k-prototypes; data mining; sustainability clustering; spatial data; grid-based k-prototypes; data mining; sustainability
►▼ Show Figures 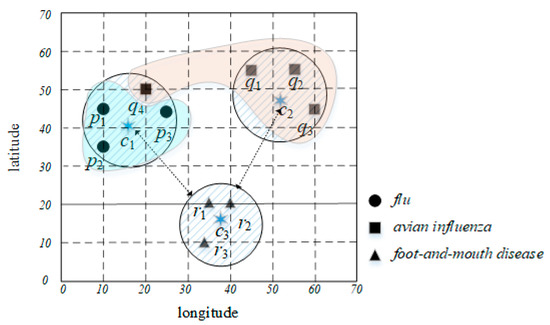