Since the introduction of the LTE (Long Term Evolution) service, we have lived in a time of expanding amounts of data. The amount of data produced has increased every year with the increase of smart phone distribution in particular. Telecommunication service providers have to struggle to secure sufficient network capacity in order to maintain quick access to necessary data by consumers. Nonetheless, maintaining the maximum capacity and bandwidth at all times requires considerable cost and excessive equipment. Therefore, to solve such a problem, telecommunication service providers need to maintain an appropriate level of network capacity and to provide sustainable service to customers through a quick network development in case of shortage. So far, telecommunication service providers have bought and used the network equipment directly produced by network equipment manufacturers such as Ericsson, Nokia, Cisco, and Samsung. Since the equipment is specialized for networking, which satisfied consumers with their excellent performances, they are very costly because they are developed with advanced technologies. Moreover, it takes much time due to the purchase process wherein the telecommunication service providers place an order and the manufacturer produces and delivers. Accordingly, there are cases that require signaling and two-way data traffic as well as capacity because of the diversity of IoT devices. For these purposes, the need for NFV (Network Function Virtualization) is raised. Equipment virtualization is performed so that it is operated on an x86-based compatible server instead of working on the network equipment manufacturer’s dedicated hardware. By operating in some compatible servers, it can reduce the wastage of hardware and cope with the change thanks to quick hardware development. This study proposed an efficient system of reducing cost in network server operation using such NFV technology and found that the cost was reduced by 24% compared to existing network equipment. The technique proposed in this study is expected to be a foundation technology for future sustainability computing. View Full-Text
Keywords: server operation; virtualization; save energy; energy harvesting; NFV; vEPC, network architecture, optimization, computer architecture server operation; virtualization; save energy; energy harvesting; NFV; vEPC, network architecture, optimization, computer architecture
►▼ Show Figures 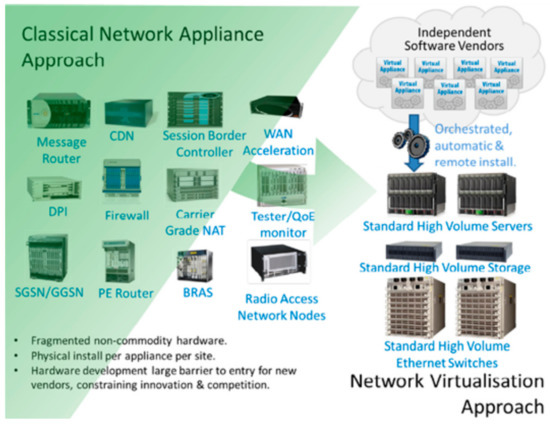 Huh, J.-H. Server Operation and Virtualization to Save Energy and Cost in Future Sustainable Computing. Sustainability 2018, 10, 1919.


Huh J-H. Server Operation and Virtualization to Save Energy and Cost in Future Sustainable Computing. Sustainability. 2018; 10(6):1919.


Huh, Jun-Ho. 2018. "Server Operation and Virtualization to Save Energy and Cost in Future Sustainable Computing." Sustainability 10, no. 6: 1919.