Is the Maker Movement Contributing to Sustainability?

What Can You Do with 100 kWh? A Longitudinal Study of Using an Interactive Energy Comparison Tool to Increase Energy Awareness †

Reducing the use of energy is important for several reasons, such as saving money and reducing impact on the climate. However, the awareness among non-experts of how much energy is required by different activities and appliances is generally low, which can lead to wrong prioritizations. In this study, we have developed an interactive tool to increase “energy awareness”, and performed a longitudinal study to evaluate its effect. A group of 58 students first did a test to benchmark their current energy awareness, where their current knowledge of energy used for 14 different activities, such as driving vehicles and using home appliances, was measured. They then tried the interactive learning tool for 10 min. Next, they did the same test immediately after trying the tool, then again one week after trying the tool, and finally again six months after trying the tool. The results showed a significant learning effect in energy awareness with a “huge” effect size of 2.25 immediately after the intervention, a “very large” effect size of 1.70 after one week, and a “large” effect size of 0.93 after six months. The results further showed that the respondents consistently underestimated what 100 kWh could be used for, and especially so for appliances and activities requiring little energy. Before the intervention, on average they underestimated how much 100 kWh could be used for by 95.2%, and six months after the intervention the underestimation was 86.8%. View Full-Text
Keywords: energy awareness; technology enhanced learning; sustainable HCI; e-learning; energy conservation; energy literacy energy awareness; technology enhanced learning; sustainable HCI; e-learning; energy conservation; energy literacy
►▼ Show Figures 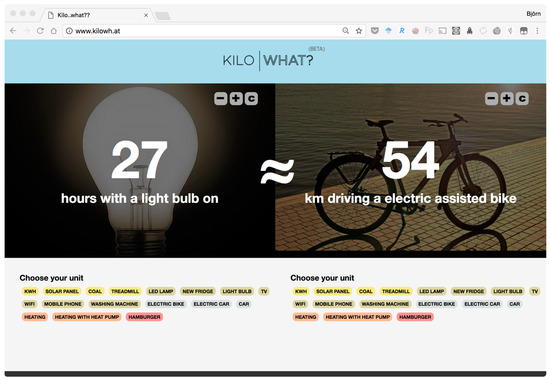 Hedin, B.; Luis Zapico, J. What Can You Do with 100 kWh? A Longitudinal Study of Using an Interactive Energy Comparison Tool to Increase Energy Awareness †. Sustainability 2018, 10, 2269.


Hedin B, Luis Zapico J. What Can You Do with 100 kWh? A Longitudinal Study of Using an Interactive Energy Comparison Tool to Increase Energy Awareness †. Sustainability. 2018; 10(7):2269.


Hedin, Björn; Luis Zapico, Jorge. 2018. "What Can You Do with 100 kWh? A Longitudinal Study of Using an Interactive Energy Comparison Tool to Increase Energy Awareness †." Sustainability 10, no. 7: 2269.