Sustainable Urban Tourism: Reflections on the Need for Building-Related Indicators

:
Ten years after the housing bubble burst, Barcelona has experienced an increase in rental prices. This increase in prices is due to a combination of factors such as household debt, urban entrepreneurialism and the marketing of the city, evictions, investment by speculative capital, changes in tenancy and an increase in rental housing for tourists. Overcrowding from tourists is gaining ground as a concern in multifunctional cities. Through an analysis of statistics and in-depth interviews with qualified agents, it is possible to observe how social struggles and unsustainability have outraged citizens and pitted them against overcrowding from tourism and the commodification of the city. The local administration of Barcelona has tried to respond to the situation by initiating a process of regulation through urban and tourism planning. Our analysis shows that these actions are of great importance but are not enough to alleviate some of the drawbacks, such as the shortage of rental housing and an excess of hotel beds.
Keywords:
city; tourism; crisis; tourist housing; political economy of tourism; social movements; Barcelona; ABTS; PEUAT

1. Introduction: The Tourist City within the Framework of Neoliberalism

A mixed methodology (quantitative and qualitative) was used. At the qualitative level, a detailed analysis of the secondary sources was carried out with a focus on extant studies conducted by different stakeholders: public administrations, private real estate agents and social entities involved in the phenomenon. Also at a qualitative level, in-depth interviews were conducted with different stakeholders and qualified informants (residents, business owners, and administration) and participant observation was utilized in sector associations to meet objectives 4 and 5. Among them are those responsible for carrying out the administrative policies in Barcelona (Director of the Strategic Plan for Tourism), activists in residents’ associations such as the ABTS (Spanish acronym for the Assembly of Neighborhoods for Sustainable Tourism) and residents of the neighborhoods most affected by the phenomenon.
At the quantitative level, the secondary sources used—mainly aimed to fulfil the objective number one—were primarily official statistics compiled by public administrations (Barcelona City Council, Generalitat de Catalunya, Incasol, the Housing Board, INE, Idescat, and others), as well as those offered by private entities in the sector (Idealista, for example). In addition, two opinion polls at street level were conducted, one aimed at residents of areas that in recent years have been most affected by the tourist phenomenon in Barcelona (35 questionnaires to residents of the Ciutat Vella district) and the second to 30 tourists in the city’s downtown neighborhoods (La Barceloneta, El Raval and the Gothic Quarter). The questionnaires and in-depth interviews are on file at the TUDISTAR research group headquarters, at the Universitat Autònoma de Barcelona. They can be consulted by contacting us ([email protected]). The triangulation of the various sources and information has allowed a global analysis of the phenomenon.
In this context and aiming to fulfil objectives number two, three and five, first this article carries out a review of the state of the matter, through a review of academic and grey literature, and presents a concise theoretical framework of these processes, as exemplified in the city of Barcelona. In essence, the development of regulations in the neoliberal tourist city is shown first. Second, the factors fueling the housing “rent bubble” are explained in a way that attempts to go beyond the impact that platforms like Airbnb, Homeaway, Niumba, and Wimdu have on the prices of rental housing in touristified cities, which several studies have already shown [16,18,24]. Third, we characterize the conflicts and citizen resistance in the face of touristification. Finally, we analyze some of the public planning and management policies developed by tourist cities aiming to alleviate these conflicts.

4. Social Movements, the Assembly of Neighborhoods for Sustainable Tourism (ABTS)

Sustainable urban tourism should aim to face the increasing tourist functionality of the traditional city. Housing being used to accommodate tourists is one of the new frontiers of tourist business in these urban spaces. Marking the border of the residential and tourist use of the built environment can be a way to solve this issue, through tourist and urban planning and management. Notwithstanding this, accommodation capacity is one of the key variables to measure the sustainability of a territory. Sustainability can be achieved, in this sense, through the application of urban planning and management measures. Sustainability measures should be oriented to improve the living conditions of the local population, such as their need for housing, boost the profitability of private business, and additionally contribute to improve the quality of the tourist experience.
Answering our first research question, our results conclude that tourism is not only responsible for this housing price increase. Housing rental price rises are due to a combination of factors such as household debt and the increase in demand arising from changes in the habits of a population or currently scarce supply; public policies of urban entrepreneurialism and the marketing of the city; evictions; investment by speculative capital pressuring on housing purchases that has clear and selective speculative intentions; changes in tenancy; the almost null presence of public rental housing; the increase in the floating population temporarily residing in cities such as Barcelona and Madrid; and stakeholders of properties in Spanish localities who have either a direct or indirect interest in tourism and the recent increase in the supply of Housing Used for Tourism (HUT). We reach this conclusion by, first, offering an overview of the housing rental market evolution in Spain; and second, analyzing the explanatory factors for the rental housing prices increases, particularly in the case of Barcelona.
Our second research question was whether it is possible to develop local administration policies to palliate this conflict. Engagement in governance is even more relevant with so many stakeholders involved. Issues involved in sustainable urban tourism cannot be solved without radical transformations to come up with solutions. In order to reach answers to this question we have, first, analyzed the social movement reactions to overtourism in the city of Barcelona; and, second, we have evaluated the local policies of urban and tourism planning developed by Barcelona’s government.
Barcelona’s local government has implemented measures for controlling, planning and limiting abuses in rental prices and housing tourist use. These local policies struggle within a context of liberalization of the housing rental market, e.g., via national Spanish regulation. We have focused our analysis particularly in the Special Urban Plan for Tourist Accommodation (PEUAT). The PEUAT regulates the urban planning and management criteria for tourist accommodation in the city of Barcelona within the framework of the Urban Planning Law of Catalonia. PEUAT regulates, among others, the HUT (in its Catalan acronym of Habitatges d’Ús Turistic). Although the PEUAT and other local public policies—such as the Strategic Tourism Plan—have attempted to be the result of participative governance, their short trajectory has already seen lines of debate and tensions arise. Both the hotel business sector and citizens’ associations (ABTS, among others) have already expressed their non-conformity, each in their respective sphere of activity. The Gremi d’Hotelers, the hoteliers’ trade association, demands the elimination of restrictions imposed on the growth of tourist accommodation in the city. For its part, the ABTS acknowledges the need for the PEUAT as a containment process, although they consider it insufficient because it fails to combat the problem of tourist overcrowding as it still allows the number of tourist accommodations to increase. For the ABTS, the PEUAT does not address the proposals for zero growth and reduction in overcrowding that had been demanded.
The government of Barcelona argues that these regulatory tools are the most appropriate choice, within the restrictions and limitations that the liberalizing EU and Spanish framework impose. Further research should contribute to answering emerging questions following our investigation: are other planning and management policies available? Where should the regulatory and planning measures be oriented to favor the sustainability of the city’s tourism development?
Barcelona could become the model for learning how to face these challenges, although this would require political will and social involvement. Despite the limitations of a case study, Barcelona is pioneering the process of intensification of the tourist restructuring of the city, as well as the social movements responses and local government policies to solve or palliate this challenge. 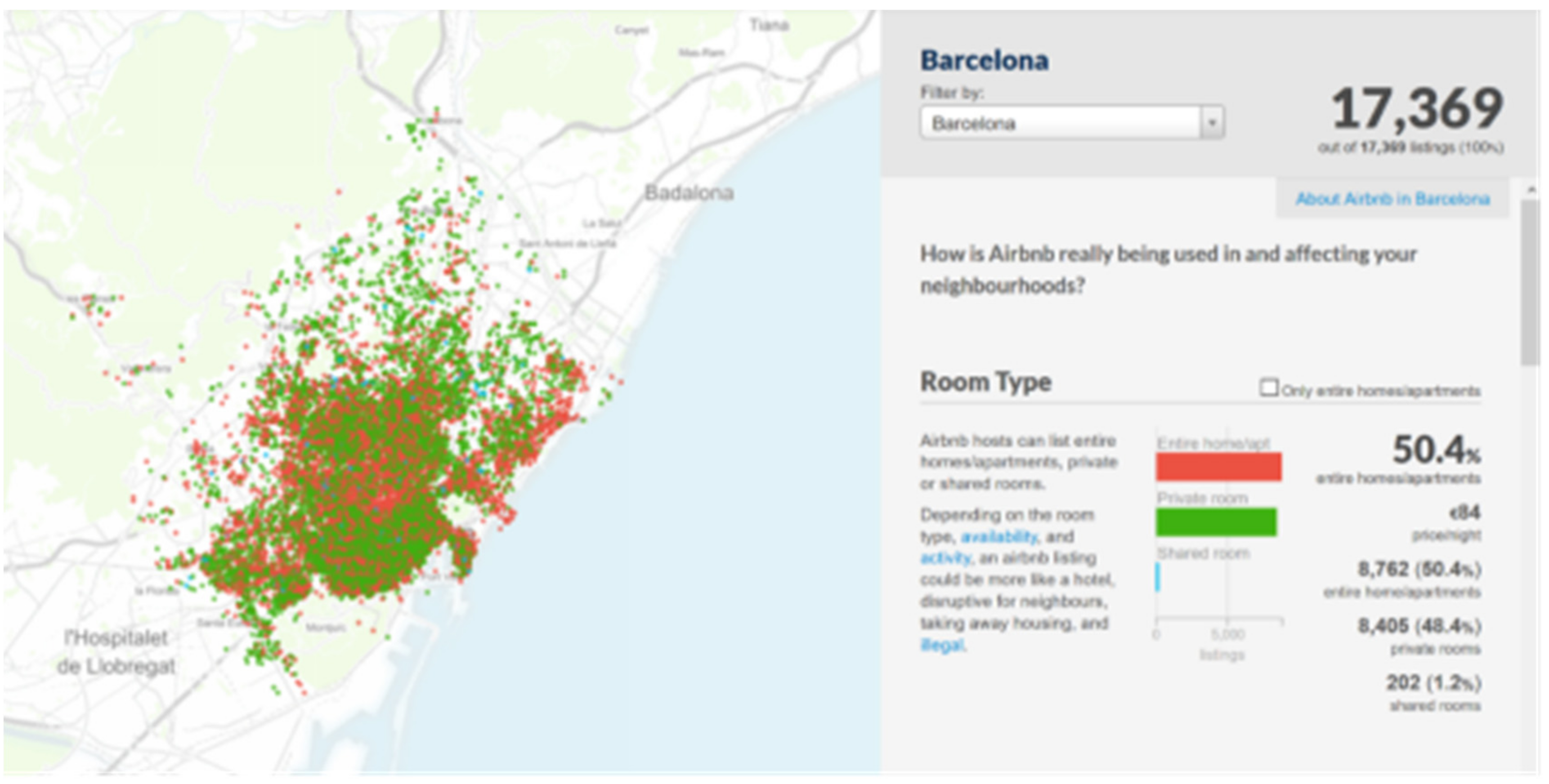 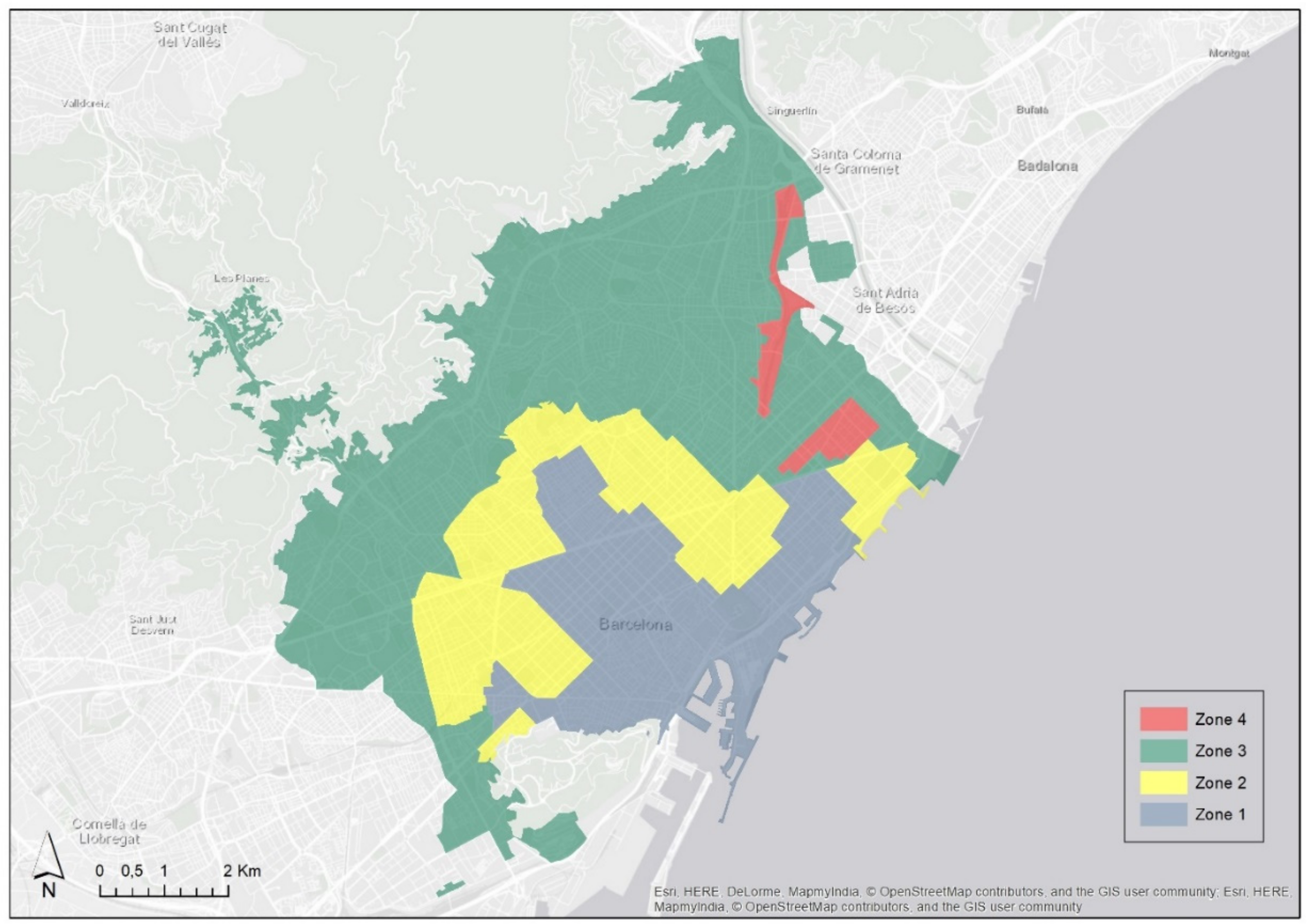