Pilot-Scale Anaerobic Co-Digestion of the OFMSW: Improving Biogas Production and Startup
Next Article in Special Issue

Toward a More Resilient Financial System: Should Banks Be Diversified?

2.1. Likelihood Function and Prior Distribution

This study uses data from the Workload statistics published by the Antitrust Division of the Department of Justice (DOJ) for the period between 1970–2009 [21]. The information is shown in Table 1. It contains the annual statistics of penalized cases and investigated cases by the criminal enforcement and civil enforcement of district courts, with respect to the laws of Sherman §1-Restraint of Trade, Sherman §2-Monopoly, and Clayton §7-Mergers. The antitrust division prosecutes in the form of criminal enforcement cases if the cartels, which are known as “hardcore cartels,” are determined by preliminary examination to have an especially injurious impact on the industry; otherwise, it prosecutes in the form of civil enforcement cases. This study does not consider the appellate cases and the cases of contemporary criminal–civil enforcement at the same time, due to a few of applicable cases.

The empirical study, using the model defined in Section 2, drew an annual beta distribution for the probability of cartel penalization. The results are summarized in Table 2, and Figure 2 illustrates the distribution for every year.
Figure 2 shows that the probability distributions tend to increase over time. Beta distributions converge on a specific range with Bayesian updating [17]. Indeed, the result shows the convergence of the present distribution on the specific range at around 0.22. We were able to calculate the posterior mean by Equation (9). Figure 3, accordingly, illustrates the annual expected probability of cartel penalization.
In the late 19th century, the United States was confronted with a very significant change: large-scale manufacturing interests emerged, in great numbers, and enjoyed excessive economic power. In response, the Interstate Commerce Act in 1887 began a shift towards federal rather than state regulation of big business. This was followed by the Sherman Antitrust Act in 1890, which is the basis of US competition laws. Later, the Clayton Antitrust Act in 1914 was enacted to prohibit price discrimination, corporate mergers, and interlocking directorates.
We can now show how the change of probability of cartel penalization impacted upon the antitrust laws in the analysis periods. The Antitrust Penalty and Procedure Act in 1974, which was known as the Tunney Act, required that prospective mergers and acquisitions obtain approval from the DOJ. In 1976, the Hart–Scott–Rodino Antitrust Improvements Act was passed, and in 1978, the leniency program was instituted. At this notable time, the probability of cartel penalization was increasing. At the peak of cartel penalization probability, in 1994, the DOJ reformed the leniency program. The reformed version of the program included an additional amnesty for those who cooperate with investigations. Figure 3 indicates that the probability after 1994 has been steady and stable. The reform of competition laws clearly had an impact on the industry.

Chang and Harrington [24] constructed a Markov process model to consider the stochastic formation and demise of cartels. By numerical analysis, they estimated the impact of the leniency program on the steady-state rate. Figure 4, in the form of the analysis results, plots the change in the rate of penalized cartels according to the proportion of prosecuted cases.
The proportion of probable prosecution cases, as reflects the 1970–2009 Workload statistics, was about 20~40%. In this value, the rate of penalized cartels is estimated about 5~10%.
The estimated probability of cartel penalization of this study and Bryant and Eckard [1]’s results are similar in their proportion of penalization to investigation. However, the present approach is the ensemble-average probability using discrete data, whereas that of Bryant and Eckard [1] is the time-average probability using continuous data. Cartel analysis is more commensurate with discrete data than with continuous data, because the form of Workload statistics data, as announced annually by the DOJ, is discrete. With our similar definition of probability, we could draw a box plot in the overlapped analysis period 1962–1988.
Figure 5 shows that the Bayesian probabilistic model estimates 0.114 for the top 25th percentile, and 0.1737 for the top 75th percentile, which are statistically significant. These are close to Bryant and Eckard [1]’s estimates, which fell between 0.128 and 0.174.

This study attempted to estimate the probability of cartel penalization using a Bayesian approach. Bryant and Eckard [1], Combe et al. [2], Harrington and Chang [3], and Zhou [4] estimated the probability of cartel detection in the form of the time-average probability from continuous data. However, the probability of cartel penalization of this study was estimated in the form of the ensemble-average probability from Workload statistics. Bryant and Eckard [1], Combe et al. [2], Harrington and Chang [3], Zhou [4], and Miller [7] all assumed that the duration of cartels and the inter-arrival times between cartels follow exponential distributions, and that the stochastic process for cartel cases is stationary. However, we built a Bayesian probabilistic model, as it did not need to consider a stationary process. This study made two assumptions: an industry-based analysis, and the grim trigger strategy. On the basis of the 1970–2009 Workload statistics from the US Department of Justice, the determined probability of cartel penalization reflected a sensitive response according to the change of antitrust policy. The result of the policy simulation of the impact of the leniency program was about 65%. The results are similar with the results of Chang and Harrington [24] and Miller [7], and similar to that of Bryant and Eckard [1]; indeed, the common finding among all of the studies, including the current study, was that the leniency program is a very effective policy.
This study evaluated the impact of antitrust policy and, therefrom estimated the probability of cartel penalization. From the antitrust authority standpoint, it provides an improved optimal policy, and from the corporate standpoint, it provides more effective decision-making. Certainly, the present paper has several limitations. First, further studies on realistic situations in specific countries and industries are needed. New antitrust policies recently have been introduced, such as for example, Amnesty Plus, punitive damage, class action, and consent order. These were also considered in further study.

J.P., J.L. and S.A. conceived and designed the research; J.P. and J.L. conducted the research and drafted the manuscript. S.A. supervised the overall work. All authors read and approved the final manuscript. 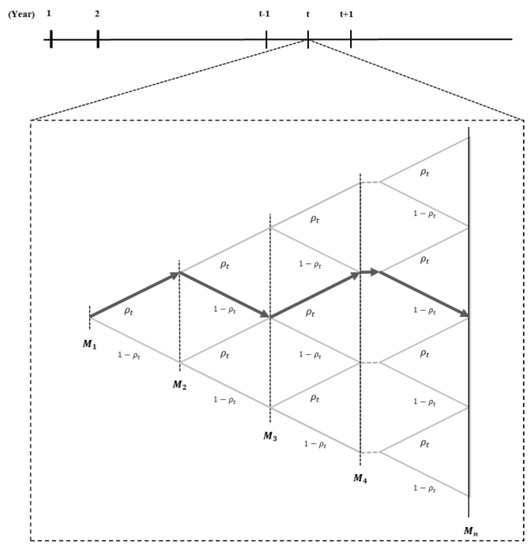 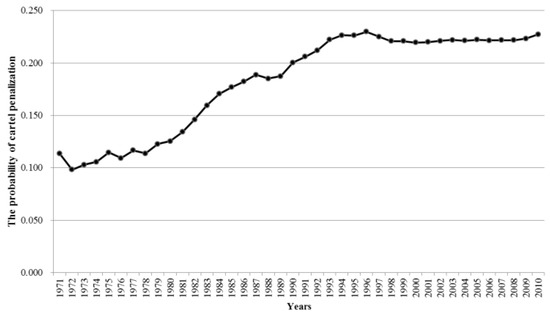 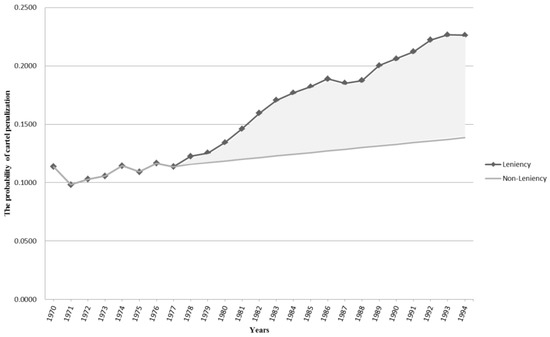 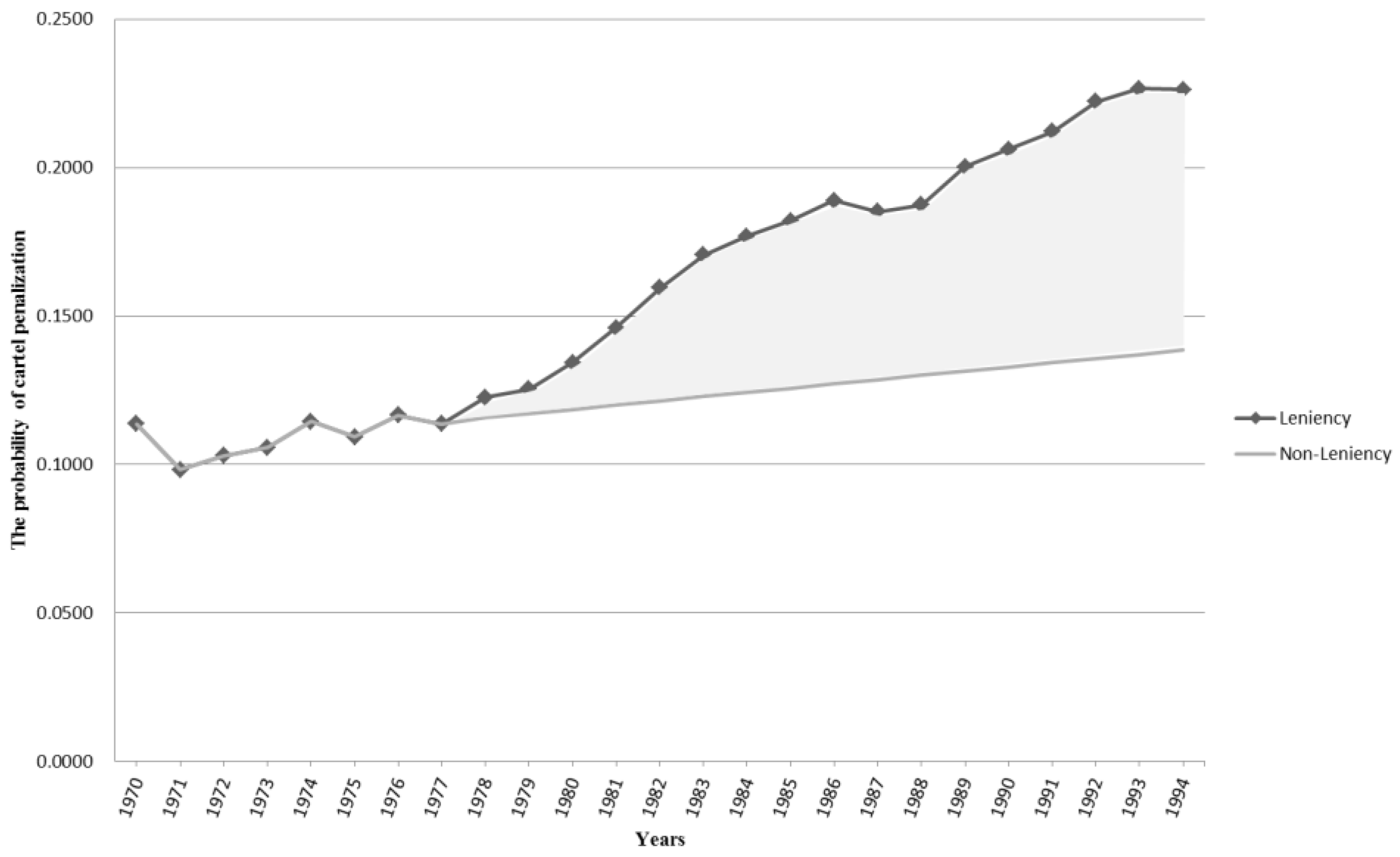