How Do Conservation and the Tourism Industry Affect Local Livelihoods? A Comparative Study of Two Nature Reserves in China
Previous Article in Special Issue

Who Cares? The Importance of Emotional Connections with Nature to Ensure Food Security and Wellbeing in Cities

Urban greenspaces, once disregarded as homogeneous habitat dominated by a few, often invasive, species, are increasingly considered as potential habitat for species conservation [1,2]. Part of their potential stems from the fact that urban greenspaces often support a high species richness that can include rare plants and animals [3,4,5]. Urban agroecosystems, which contain a diversity of plants reliant on insect-mediate ecosystem services like pollination, are especially promising habitats for pollinator conservation [6,7]. These agroecosystems are often transformed from vacant lots, which can themselves be valuable habitats for bees [2] and biodiversity more broadly [6,8,9,10,11]. Urban agroecosystems and vacant lots differ in their management and floral composition, both of which are important drivers of species abundance and richness [11,12]. At the same time, both of these habitat types are located within the urban landscape that can act as a strong environmental filter for communities [13]. Understanding how both the landscape context and the local design and management decisions ongoing within vacant lots and urban agroecosystems act to filter a city’s bee community is key to incorporating conservation into urban greenspace planning [14,15].
The landscape structure surrounding an urban greenspace can strongly influence conservation-driven management outcomes. Habitat fragmentation and loss that result from urbanization are known contributors to patterns of species richness and abundance across rural to urban gradients [16,17]. At the same time, landscape features at the city-wide scale can act as strong environmental filters, influencing if taxa from a given species pool are able to colonize distinct greenspace patches [12]. For instance, isolation from other greenspaces can lead to reduced bee species richness within urban forest fragments [18] and connectivity with other greenspaces positively predicts bee abundance on green roofs [19]. In some cases, landscape variables also influence the functional trait distribution found within groups [17,20]. For instance, highly fragmented urban landscapes tend to favor smaller species and cavity nesting species [21,22].
At a local scale, species interactions among bees and floral resources can drive patterns of pollinator community assembly [12]. Increasing bee species richness is often linked to floral species richness [23], which frequently increases with the degree of urbanization [4,24,25]. Within a city, urban greenspaces offer a varied breadth and quality of dietary resources [12,26,27,28,29]. Exotic plant species can make up a substantial portion of the floral resources found in urban areas [30]. Although some exotic species common within vacant lots have been found to be highly attractive [31,32], these resources may also be most suitable for polylectic [33] and/or exotic bees [31]. Urban agroecosystems are likely to have a wider breadth of floral resources, including food crops, native and exotic ornamentals, and many of the same weedy species found in vacant lots. Adding flowering resources, principally native species aimed at supporting pollinators and other beneficial insects, increases available nectar and pollen resources [34] and results in a greater richness and abundance of pollinators within a patch for some [35,36], but not all [37] cases.
Herein, we examine the role of landscape structure on the taxonomic and functional trait distributions of bees among urban greenspaces, and evaluate how the design and management of these habitats influences the richness, abundance, dietary breadth and niche overlap within bee assemblages. Our study was conducted within the city of Cleveland, Ohio, a shrinking city that experienced significant population decline resulting in an overabundance of infrastructure, which was demolished over time resulting in vacant land. Worldwide, over 450 cities have experienced significant population decline, including 59 within the United States [38]. Many of these cities have large holdings of reclaimed greenspace, for instance, Cleveland currently encompasses over 27,000 vacant lots that totals more than 1500 ha. [39]. While the spatial extent of vacant land within shrinking cities represents a potentially important conservation resource, the relative importance of local habitat management and landscape context for structuring bee assemblages is largely unknown. Therefore, our objectives were to: (1) compare the richness, abundance and composition of bees found within vacant lots and urban agroecosystems, (2) determine if the intensity of urbanization surrounding these sites influenced bee assemblages and (3) examine how the conversion of vacant land to urban agriculture influenced foraging patterns, including the dietary breadth and overlap of bee species. Our hypotheses were that (i) urban agroecosystems would support a greater richness of pollinator species as a result of enhanced dietary niche breadth and reduced overlap, and (ii) that densely urbanized landscapes would supply a reduced taxonomic richness, higher proportion of exotic species, reduced average body size, and reduced proportion of ground nesting species relative to cavity nesting species to vacant lots and urban farms.

In conclusion, our study adds to the growing body of literature advocating for the maintenance of minimally-managed vacant lot habitats as a conservation resource [6,8,9,10,11]. These sites support a high pollinator richness and abundance and require relatively little financial investment. Furthermore, a unique bee community is found within vacant lots versus urban farms, illustrating the value in diversifying the design and management of greenspaces in cities to maximize conservation gains and the delivery of ecosystem services. Maintaining vacant lot greenspaces may be most important for bees within highly urbanized landscapes where few foraging patches exist; however, patches surrounded locally by high concentrations of impervious surface may limit colonization and thus not be ideal spaces for focused conservation investment. Finally, the strength and relationship of landscape effects can be habitat dependent; in several cases, we found a significant influence of landscape variables on assemblages within urban gardens, but not vacant lots. This supports the idea that landscape context influences the impact of local-scale management on insect community dynamics [77], a hypothesis that has not been supported in traditional agricultural systems [78]. 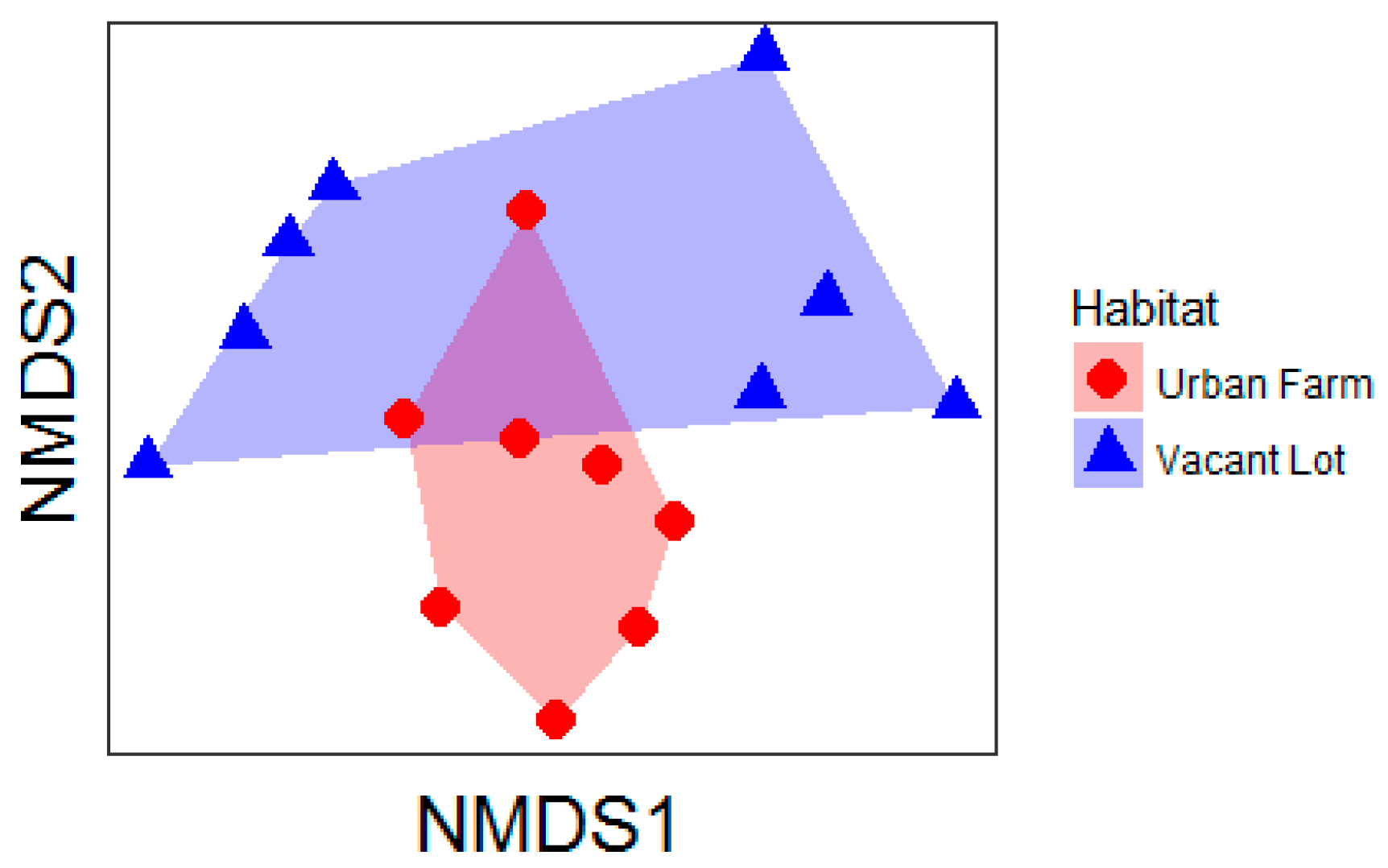 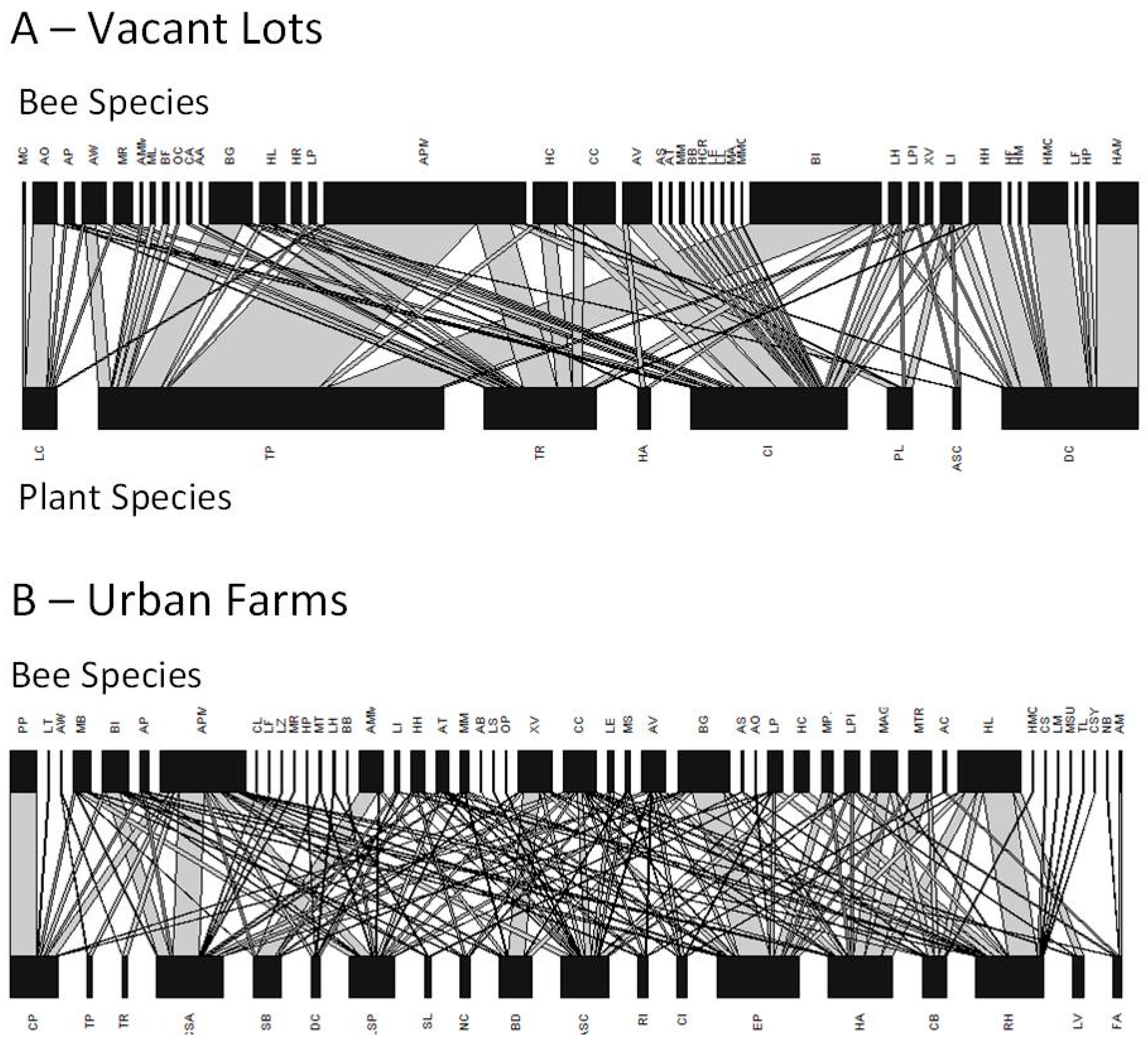