Greenhouse Gas Emission Intensities for the Livestock Sector in Indonesia, Based on the National Specific Data

Mangrove deforestation is occurring globally at a rapid rate, and is causing serious ecological and economic losses on all scales. Monitoring mangrove changes is the first important step for mangrove management and conservation. Zonation of mangrove species (ZMS) is the predictable and discrete ordering of mangrove species caused by a unique, intertidal environment. Mapping the ZMS is critical to understanding the mangrove community at a species level. In this paper, the Standard Deviational Ellipse (SDE) was proposed as a method to evaluate mangrove species from a new dimension of directional changes. Three dominant mangrove species, Kandelia obovata (KO), Avicennia marina (AM), and Acanthus ilicifolius (AI), in Mai Po, Hong Kong were analyzed using SDEs based on the time series Système Pour l’Observation de la Terre (SPOT) and Gaofen-1 (GF-1) satellite images. The SDE results demonstrated that in the past 25 years: (1) The overall spatial extent of the mangroves in Mai Po expanded significantly, approximately from 150 to 350 Ha, and show a zonation pattern with a clear sequence of species perpendicular to the shoreline; (2) KO was the dominant species in most years, showing the strongest directional characteristic; (3) All three species zones have moved toward the north and west, as observed by the SDE centers. The SDE was proved to be a useful tool for understanding the temporal and spatial changes of mangrove zonation. View Full-Text
Keywords: mangroves; zonation; changes; remote sensing mangroves; zonation; changes; remote sensing
►▼ Show Figures 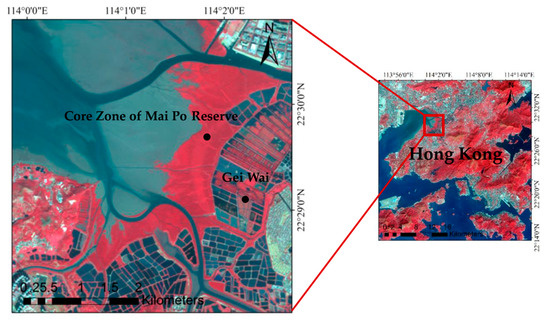