Assessing the Contribution of Bioeconomy to the Total Economy: A Review of National Frameworks

Socioeconomic Indicators to Monitor the EU’s Bioeconomy in Transition

The monitoring of the European bioeconomy is hampered by a lack of statistics on emergent and partially bio-based sectors. In this study, we complete the picture of the bioeconomy in the European Union (EU) by first estimating a set of socioeconomic indicators in missing sectors. Second, we identify four broad bioeconomy patterns within the EU that differ according to the specialisation of Member States’ labour markets in the bioeconomy (location quotient) and according to the apparent labour productivity of their bioeconomies. The patterns are geographically distributed in (i) Eastern Member States and Greece and Portugal; (ii) Central and Baltic Member States; (iii) Western Member States; and (iv) Northern Member States. They are strongly related to the level of gross domestic product (GDP) per capita in Member States, and to their political histories (e.g., their year of accession to the EU, and the existence and maturity of their bioeconomy strategies). Within each group, diversity exists in terms of sectoral bioeconomy development. Third, we examine temporal dynamics over the period 2008–2015, stressing with the cases of Slovenia, Portugal, Greece and Finland that a transition from one group to another is possible. Finally, we take a closer look at the East–West bioeconomy disparities within Europe and suggest measures to promote EU bioeconomies. View Full-Text
Keywords: bioeconomy; EU Member States; apparent labour productivity; jobs and growth; typology bioeconomy; EU Member States; apparent labour productivity; jobs and growth; typology
►▼ Show Figures 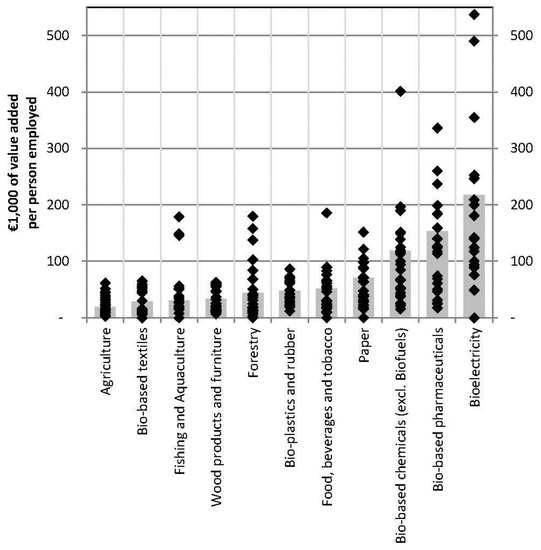