Institutionalizing Agroecology in France: Social Circulation Changes the Meaning of an Idea

Agroecology has come a long way. In the past ten years, it has reappeared in France throughout the agricultural sector and is now included in public and private strategies and in supportive policies, with collateral interest effects. Is a new “agro-revolution” taking place? To address this issue, using a methodology mixing hyperlink mapping and textual corpora analysis, we focus here on the trajectory of agroecology in various worlds: that of academia, social movements, non-governmental organizations (NGOs) that promote international solidarity, research and training institutions and public policies. This trajectory intertwines actors and time lines, with periods in which certain actors play a specific role, and others in which interactions between actors are dominant in terms of coalition advocacy. Some actors play a major role in circulating agroecology as they belong to several different social worlds (e.g., academia and NGO), present high occupational mobility (from politician to scientist and vice versa), are charismatic or have an irradiating aura in the media, and can articulate and circulate ideas between different social arenas (including between countries). The stabilization of networks of actors is interpreted as the institutionalization of agroecology, both within social movements as well as because of its integration into a policy aimed at an ecological modernization of agriculture. The international positioning of many actors anchors national and regional initiatives more strongly. It is also a prerequisite for the amplification and development of agroecology. View Full-Text
Keywords: agroecology; France; genealogy; institutionalization; social movement; science; policy agroecology; France; genealogy; institutionalization; social movement; science; policy
►▼ Show Figures 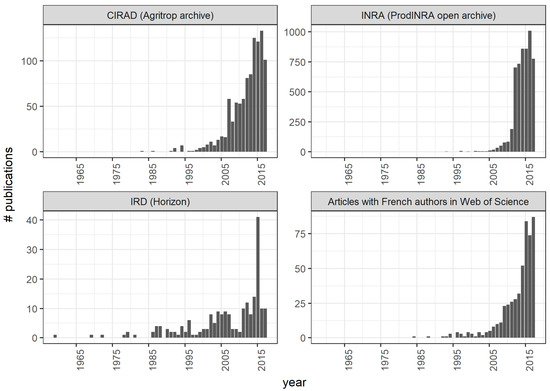