Bike Sharing and the Economy, the Environment, and Health-Related Externalities

Along with the growing levels of residents’ travel demand, personal transportation plays an essential role in our lives. Especially in recent years, the numbers of personal cars have seen rapid growth. For example, ownership of personal vehicles in China has risen from 18.48 million in 2005 to 163.30 million in 2016 [1]. The growing levels of personal cars impose externalities on society, the economy and the environment, which has attracted the attention of academia [2,3,4,5,6]. Cars can increase employment, productivity, and economic growth [7], but most attention has been on their negative externalities. According to the literature [5,6,8,9,10], cars entail energy dependence, negative environmental effects (air pollution and noise annoyance), public health issues, road damage, accidents, congestion, and the overuse of public spaces in cities. Policy makers need to solve these negative externalities.
Solutions to negative externalities, such as Pigouvian taxes [11,12,13,14] or cap-and-trade systems [15,16,17], have been proposed from an economic point of view. Some policies, such as those of land use and transport planning [18,19], incentives to public transport, and information campaigns [20], can be combined with corrective instruments. In addition, regulations or new technology could play a role [5]. In recent years, “transport sharing” has become increasingly popular across the globe, which is designed not only to reduce negative externalities but also to satisfy the demand of residents’ travel needs and economic development.
Bike-sharing, as a form of shared transportation, has received increasing attention in recent years. The basic premise of bike-sharing programs is sustainable transportation. Objectives associated with bike-sharing programs include increased cycle usage and mobility options, an improved first/last mile connection to other travel modes, reduced transport congestion and energy consumption, reduced environmental impacts, and improved public health [21,22,23,24]. However, controversies regarding the implementation process, such as the waste of resources as well as bicycle maintenance and management [25], have emerged. Therefore, two crucial questions consist in whether there are externalities, as well as whether and how such impacts can be estimated.
Many studies on bike-sharing have focused on qualitative evaluation and discussion. For example, Gleason and Miskimins present various methods of making bikes more available in federal lands, and explore how elements of successful bike programs may be adapted for federal lands settings [26]. Nair et al. analyze the functioning of a large-scale bicycle sharing system in Paris to provide insights for policy makers [27]. Some quantitative studies have taken a closer look at bike-sharing safety and the repositioning problem [28,29]. However, there are few empirical studies to comprehensively explore the externalities of bike-sharing. Theoretically speaking, bike-sharing programs would have impacts on public transportation, transport congestion, energy use, the environment, and personal health. Limited by essential data, in this paper, we only attempt to quantitatively explore the externalities of bike-sharing on the economy, fuel use, harmful emissions, and health in Beijing, China. The study contributes to a better comprehension of the externalities of bike-sharing, and provides empirical evidence for the impacts of bike-sharing. The findings will be important and useful for urban transportation policies.
This paper estimates economy, environment, and health externalities of a bike-sharing program in Beijing. In the last two years, bike-sharing, used with mobile apps, has been prominent in Chinese cities. The online bike-sharing service is different in the following ways: customers can easily locate and unlock shared bikes using mobile apps on a smart phone; shared bikes can be rented and returned to any public area instead of one fixed location. Different online bike-sharing platforms in China are distinguished by color. Of the 20 largest bike-share programs in the world, all but four are in China. Therefore, China is ideal for exploring and analyzing the externalities of bike-sharing.
This paper is organized into three main sections. First, the framework of this paper and the methods used to estimate the externalities of bike-sharing are introduced. Next, key findings are described. Finally, the results are summarized and some implications are provided.

This paper attempts to explore the externalities of bike-sharing program in Beijing. Bike-sharing is a good option for short trips across the city, and is convenient, healthy, and environmentally friendly. Based on existing studies, we estimate the externalities of bike-sharing in the following ways: First, a bike-sharing system solves “the last mile” problem [23] and complements existing urban traffic. It can improve the first or the last mile connection to other traffic modes. In addition to traveling to bus stops or subway stations from home on foot, residents can now use a bicycle-sharing service, which is convenient and time-saving. In this paper, we call this externality the “supplement effect.” Second, bike riding is a green and low-carbon way to travel. Apart from solving the first/last mile problem, bike-sharing can partly replace travel modes of heavy pollution and energy consumption, such as cars and motorcycles. Such alternatives can influence overall energy consumption and further cut the emissions of pollutants. We call this externality the “substitution effect.” Third, the changes of emissions will have impacts on public health, which is called the “health effect.”
In this paper, we mainly estimate these three externalities in Beijing. Figure 1 shows the overall estimation strategy used in this study. In Figure 1, the arrows represent the estimation approach and indicate a causal relation.

2.2. The Estimation of the “Supplement Effect”

As mentioned before, the bike-sharing system provides an effective solution to the first/last mile problem. Residents travel between their homes and bus stops and between subway stations and workplaces on foot. Now, with a bike-sharing service, workers can reduce this travel time by commuting back and forth by bicycle. Therefore, a bike-sharing service can increase residents’ leisure time. According to economists, leisure time has a real impact on the economy [30,31,32,33]. We can estimate the “supplement effect” through the following steps:
First, we calculate the change in commute time when an office worker chooses bike-sharing instead of walking from home to bus stop or from station to workplace. In this paper, we consider two periods: the morning peak and the evening peak in Beijing. The changed time can be estimated through the method of distance moved over the increased speed. where stands for the change in time per person per day. represents the one-way distance of the commute, including from home to station and from station to workplace. and stand for the riding speed and walking speed in the morning peak, respectively. and refer to the riding speed and walking speed in the evening peak, respectively. Most data is obtained mainly from The Annual Report of Beijing Transport Development of 2016 [34].
Second, we estimate the economy effect due to the change in time. Many existing studies suggest that leisure time has a significant impact on economic growth. For example, some studies find that an increase in leisure time of 1% would increase GDP per capita by 6.628% in America, 3.26% in Denmark, and 1.86% in Japan [33,35]. Therefore, we estimate the externalities of bike-sharing on the economy by where refers to the economic growth due to the supplement effect. stand for the change in time per person because of the bike-sharing service. is the leisure time per person, which is obtained from the current literature [33]. y is a proxy for economy development, which is estimated through the per capita GDP of Beijing here. is the coefficient between leisure time and economy. In our analysis, we estimate the supplement effect under different modes. It is also noteworthy that the users of bike-sharing services are not only workers, but also students and other residents. Here we mainly estimate the impact based on office workers. Therefore, the supplement effect of bike-sharing is undervalued here.

2.3. The Estimation of the “Substitution Effect”

As defined above, the substitution effect indicates that a bike-sharing system provides a green travel mode, and riding can replace certain high-energy-consuming travel modes. The government of Beijing has enacted a series of polices to develop such green travel modes. In 2016, Beijing Municipal Commission of Transport enacted “The Traffic Development Plan of the 13th Five-Year Period of Beijing,” proposing that Beijing will develop green travel modes and build a convenient and comfortable bicycle system. Moreover, the Beijing Municipal General Office has brought forward a plan to further restrict motor vehicle travel and to reduce the use of personal cars [36]. Based on these policies, we designed an experimental scenario. We selected 2015 as the baseline year. According to “The Traffic Development Plan of the 13th Five-Year Period of Beijing,” the ratio of green travel will be greater than 70% in Beijing by the end of the 13th Five-Year period. The Beijing Municipal Commission of Transport further proposes that the proportion of green travel will be as high as 75% by the end of 2020. Therefore, in such a scenario, we assume that 75% of bike-sharing kilometers traveled will replace personal cars to estimate the substitution effect. Further, we estimate the changed energy consumption and emission with a source-specific emission inventory for China. Thus, the substitution effect is estimated by the following equations.
First, we estimate the kilometers traveled provided by the existing bike-sharing service: where refers to the bike-sharing kilometers traveled. stands for the average daily distance of bicycles, and r is the turnover rate per day, which is obtained from The Annual Report of Beijing Transport Development of 2016 [34]. V is the stock of existing bike-sharing, which is obtained from the Beijing Municipal Commission of Transport.
Then, the changed energy consumption can be calculated by the following equation: where F stands for the consumption of the fuel. In our design, bike-sharing replaces personal cars, which mainly burn gasoline. is the fuel economy of gasoline, which is obtained from the study by Yang and He [37].
We multiply the emission coefficients by to calculate the resulting harmful emissions: where E represents harmful gases emissions, and refers to the emission coefficient. Due to the limited data on other pollutants, this paper estimates emissions only for , , , , , and . The data we use is displayed in Table 1. Here, we present five kinds of emissions. is not included because the emission of is estimated based on a method that is different from Equation (5).
Based on the “Compiling Technology Guide of Air Pollutant Emissions Inventory of Road Vehicles,” the emissions are estimated based on the mass balance of sulfur by the following equation: where is the annual sulfur content of the fuel, whose unit is ppm. The unit of F is tons.

2.4. The Estimation of the “Health Effect”

The authors would like to thank Liu Li, Ou Jia-Jia, Wei Wei, and all other colleagues from both China Agricultural University and Jinan University for their help, constructive suggestions, and pertinent comments. This project was supported by the National Natural Science Foundation of China (Grant Nos. 71573258 and 71273261). 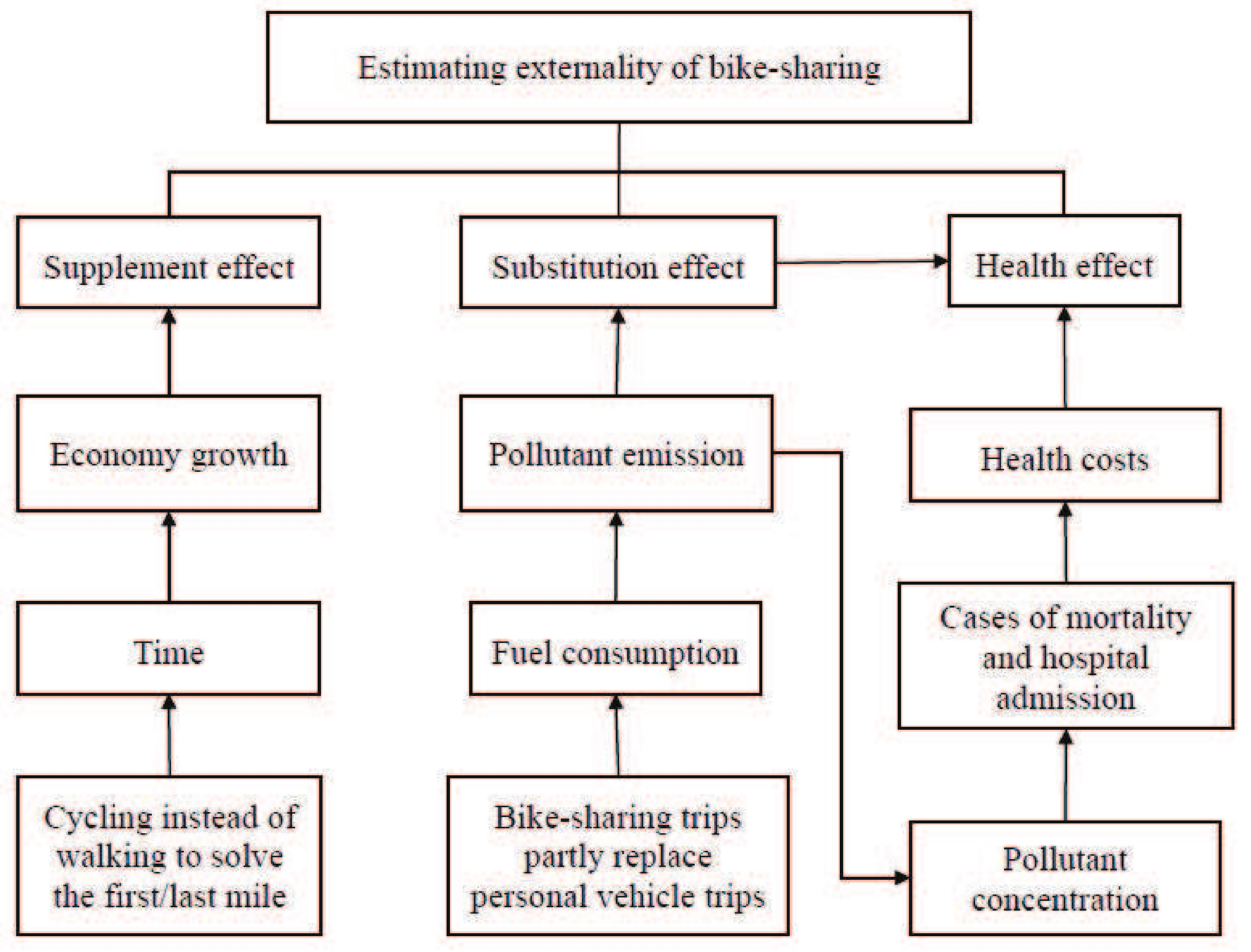