Dynamics of Metropolitan Landscapes and Daily Mobility Flows in the Italian Context. An Analysis Based on the Theory of Graphs

The distribution of services across a territory generates daily commuting flows, which have a significant influence on the development of the territory and often causes congestion in large areas. This negatively affects the environmental, economic and social components of the metropolitan landscape. Using the graph theory, we constructed and analyzed various (in typologies of transportation and moving time) flow networks in the two main Italian metropolitan areas: Rome (MCR) and Milan (MCM). The analysis of these networks provided us with strategic information on the dynamics of the two urban macro-systems. In particular, the aim of our study was to: (i) identify the characteristics, distribution and direction of the main attractive forces within the regional systems under study; (ii) identify the main differences in size and structure of commuter networks between the two metropolitan areas and between the two regional systems that include the two mother cities; and, (iii) identify the main differences in the size and structure of the two commuting networks by transport modes (private, public, non-motorized mobility) and the travel time. The results highlighted significant differences between the two case studies regarding volume flows, complexity and structure networks, and the spatial extension of the territories that are governed by the two metropolitan areas. MCR is a strongly monocentric urban system with a regional influence centred on the mother city of Rome, while MCM is a diffused polycentric regional metropolitan system centred on multiple mother cities. The findings many have a role in urban planning choices and in the evaluation of policies aimed to favor sustainable mobility. View Full-Text
Keywords: commuting; metropolitan areas; network analysis commuting; metropolitan areas; network analysis
►▼ Show Figures 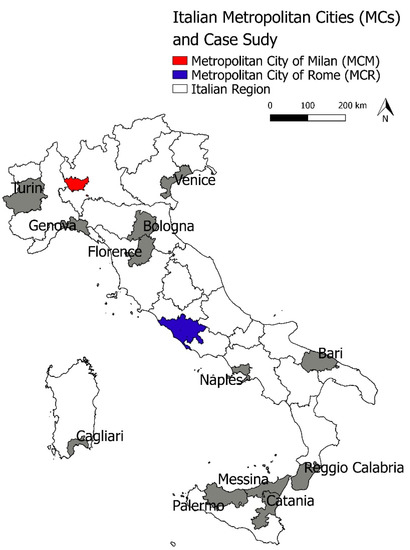 Ganciu, A.; Balestrieri, M.; Imbroglini, C.; Toppetti, F. Dynamics of Metropolitan Landscapes and Daily Mobility Flows in the Italian Context. An Analysis Based on the Theory of Graphs. Sustainability 2018, 10, 596.


Ganciu A, Balestrieri M, Imbroglini C, Toppetti F. Dynamics of Metropolitan Landscapes and Daily Mobility Flows in the Italian Context. An Analysis Based on the Theory of Graphs. Sustainability. 2018; 10(3):596.


Ganciu, Amedeo; Balestrieri, Mara; Imbroglini, Cristina; Toppetti, Fabrizio. 2018. "Dynamics of Metropolitan Landscapes and Daily Mobility Flows in the Italian Context. An Analysis Based on the Theory of Graphs." Sustainability 10, no. 3: 596.