The Current State and Future Directions of Organic No-Till Farming with Cover Crops in Canada, with Case Study Support
Next Article in Special Issue

The Taiwan Strait (TS) is one of the main sources of phosphate that supports the large fish catches of the phosphate-limited East China Sea (ECS). The Penghu Channel is the deepest part of the TS, and most of the flow of the TS towards the ECS is principally through this channel. Empirical equations that are based on measurements made during 19 cruises (2000–2011) were combined with water velocity, salinity, and temperature, which were modeled using HYCOM (the Hybrid Coordinate Ocean Model) to obtain the annual fluxes for total alkalinity (TA), dissolved inorganic carbon (DIC), nitrate plus nitrite, phosphate, and silicate fluxes. The TA and DIC are mainly transported in the top layer (0–55 m) because the current is much stronger there than in the bottom layer (55–125 m) whereas the TA and DIC concentrations in the top layer are only slightly smaller compared with the bottom layer. In contrast, the nitrate plus nitrite flux is mainly transported in the bottom layer because the concentrations are much higher in the bottom layer. Generally, nutrient flux increases with the Pacific Decadal Oscillation (PDO) index, but TA and DIC fluxes increase as the PDO index decreases. View Full-Text
Keywords: nutrient flux; phosphate; silicate; nitrogen; carbon flux; Taiwan Strait; East China Sea nutrient flux; phosphate; silicate; nitrogen; carbon flux; Taiwan Strait; East China Sea
►▼ Show Figures 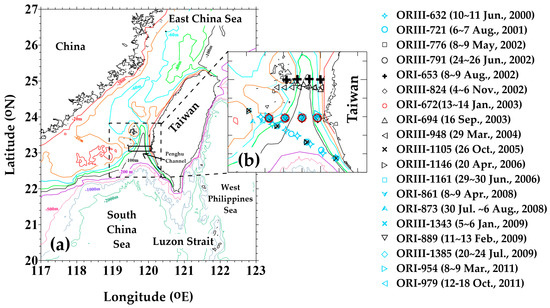