This paper presents a structural equation model for analyzing the relationship between four latent variables: infrastructure, production processes, transport benefits, and economic benefits within the supply chain for wine from La Rioja, Spain, by incorporating 12 observed variables. The model proposes six hypothesis that were tested using information gathered from 64 surveys completed by managers of several wineries in the region. The WarpPLS v.5® software (Version 5.0, Script Warp Systems, Laredo, TX, USA) was used to execute the model and analyze the direct, indirect, and total effects among latent variables. The results show that the control of production processes is a direct source of economic and transport benefits because of its higher explanatory power of those variables. Similarly, infrastructure is a direct source of transport and production benefits, and some of them are given indirectly. In addition, infrastructure does not have a direct effect on economic benefits; however, there were indirect effects given through production process and transport benefits. Infrastructure is a very important variable because of its influence in the final performance, but also because of its high environmental impact. Finally, economic benefits were explained in 43.8%, 19.1% belonging to production process, 21.1% coming from transport benefits, and 3.7% from infrastructure. View Full-Text
Keywords: structural equation modelling (SEM); Rioja wine; supply chain performance; infrastructure structural equation modelling (SEM); Rioja wine; supply chain performance; infrastructure
►▼ Show Figures 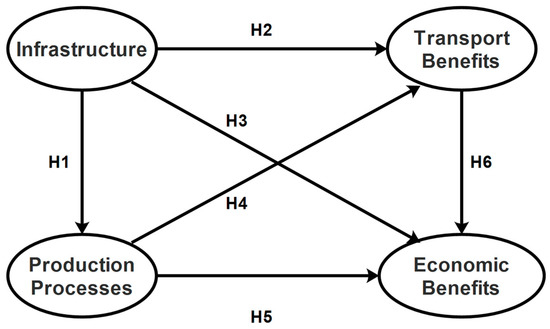