Effects of an Intensive 6-Week Rehabilitation Program with the HUBER Platform in the Treatment of Non-Specific Chronic Low Back Pain: A Pilot Study
Previous Article in Journal

During the last couple of critical years, worldwide, there have been more than 550 million confirmed cases of COVID-19, including more than 6 million deaths (reported by the WHO); with respect to these cases, several vaccines, mainly mRNA vaccines, seem to prevent and protect from SARS-CoV-2 infection. We hypothesize that oxidative stress is one of the key factors playing an important role in both the generation and development of various kinds of disease, as well as antibody generation, as many biological paths can generate reactive oxygen species (ROS), and cellular activities can be modulated when ROS/antioxidant balance is interrupted. A pilot study was conducted in two stages during the COVID-19 pandemic in 2021 involving 222 participants between the ages of 26 and 66 years. ROS levels were measured before an after vaccination in the blood samples of 20 individuals who were vaccinated with two doses of mRNA vaccine, and an increase in ROS levels was observed after the first dose, with no modifications observed until the day before the second vaccination dose. A statistically significant difference (p < 0.001) was observed between time points 3 and 4 (before and after second dose), when participants were vaccinated for the second time, and ROS levels decreased from 21,758 to 17,580 a.u. In the second stage, blood was collected from 28 participants 45 days after COVID-19 infection (Group A), from 131 participants 45 days after receiving two doses of mRNA vaccine against COVID-19 (Group B), and from 13 healthy individuals as a control group (Group C). Additionally, antibodies levels were measured in all groups to investigate a possible correlation with ROS levels. A strong negative correlation was found between free radicals and disease antibodies in Group A (r = −0.45, p = 0.001), especially in the male subgroup (r = −0.88, p = 0.001), as well as in the female subgroup (r = −0.24, p < 0.001). Furthermore, no significant correlation (only a negative trend) was found with antibodies derived from vaccination in Group B (r = −0.01), and a negative trend was observed in the female subgroup, whereas a positive trend was observed in the male subgroup. View Full-Text
Keywords: COVID-19; ROS; mRNA vaccines; antibodies COVID-19; ROS; mRNA vaccines; antibodies
►▼ Show Figures 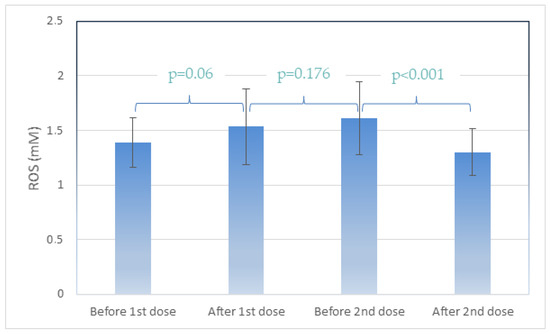