What Quality of Care Means? Exploring Clinical Nurses’ Perceptions on the Concept of Quality Care: A Qualitative Study
Previous Article in Journal

Diabetic retinopathy is a vascular disease of the retina that affects patients with uncontrolled diabetes. Untreated diabetic retinopathy (DR) can eventually lead to blindness. To date, diabetic retinopathy is the third leading cause of vision loss in the working class globally. Frequent retinal screening for all diabetic people is an effective method of preventing diabetic retinopathy blindness. This has relied on the use of ophthalmologists, but due to scarce resources, such as a shortage of human resources for eye health, this has denied many patients quality eye health care in a resource-limited setting. The recent advances on the use of teleophthalmology are promising to close this gap. This study aimed to map available evidence on the use of teleophthalmology in the screening of DR globally and to explore how this can be used to complement short-staffed eye clinics, especially in resource-constrained contexts. Studies were sourced from Google Scholar, PubMed, Science Direct, and EBSCO host. The final study selection was presented using a PRISMA chart. The mixed method appraisal tool was used to assess the quality of the nine studies included. The random effect model was used to estimate pooled prevalence estimates. Levels of heterogeneity were evaluated using Cochran’s Q statistic and I2. Of nine included studies, eight were from high-income countries. The screening was performed at the primary healthcare level in eight of nine included studies. Only one study used a mydriatic agent, and the commonly used fundus camera was the non-mydriatic fundus camera. The overall estimated pooled prevalence of DR was 29 (95%CI: 10–34). Teleophthalmology at the primary health care level showed that early intervention in diabetic retinopathy reduced avoidable blindness and ensured remote access to eye health professionals, thus alleviating the burden on them. View Full-Text
Keywords: diabetic retinopathy; teleophthalmology; screening; blindness; diabetes diabetic retinopathy; teleophthalmology; screening; blindness; diabetes
►▼ Show Figures 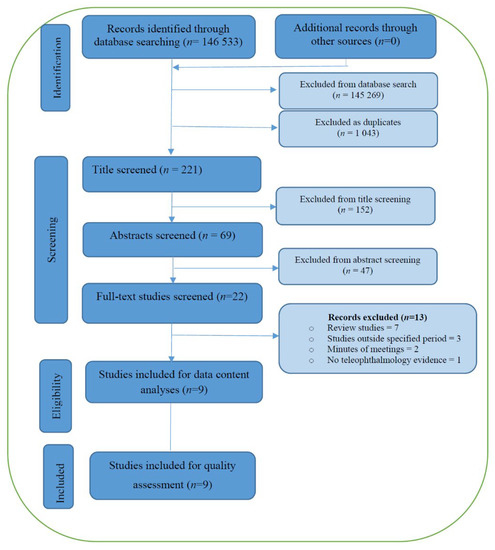