Lupus podocytopathy (LP) is an uncommon manifestation of systemic lupus erythematosus (SLE) and is not included in the classification of lupus nephritis. The diagnosis of LP is confirmed by the presence of diffuse foot process effacement in the absence of capillary wall deposits with or without mesangial immune deposits in a patient with SLE. Here we describe a 13-year-old female who presented with nephrotic syndrome (NS) seven years after the diagnosis of SLE. The renal function had been stable for seven years since the SLE diagnosis, as manifested by the normal serum creatinine, serum albumin and absence of proteinuria. Renal biopsy showed evidence of minimal change disease without immune complex deposits or features of membranous nephropathy. Renal function was normal. The patient had an excellent response to steroid therapy with remission within two weeks. The patient remained in remission five months later during the most recent follow-up. This report highlights the importance of renal histology to determine the accurate etiology of NS in patients with SLE. Circulating factors, including cytokines such as interleukin 13, may play a role in the pathophysiology of LP and needs to be studied further in future larger studies.
Keywords: SLE; nephritis; podocytopathy; minimal change disease SLE; nephritis; podocytopathy; minimal change disease

Systemic lupus erythematosus (SLE) is an inflammatory autoimmune disease affecting multiple-organ systems with periods of relapses and remissions [1,2]. About 15 to 20% of all SLE patients have a disease onset before the age of 16 years and is termed pediatric SLE (p-SLE). Renal involvement, also called lupus nephritis (LN), is common in SLE, with 60% of cases presenting with early LN at the time of diagnosis of SLE [3,4]. The clinical manifestations of LN include abnormal renal function, hematuria, proteinuria and elevated blood pressures, among others. Common renal biopsy findings in LN are endocapillary proliferation, mesangial hypercellularity, full-house immunofluorescence and various electron dense deposits in the mesangium, subepithelial or subendothelial regions. LN is a major risk factor for mortality and morbidity in patients with SLE and a significant portion of these patients go on to develop end stage renal disease (ESRD) [5].
Nephrotic syndrome (NS) is manifested by nephrotic-range proteinuria, hypoalbuminemia and edema. Effacement of the podocyte foot processes is the hallmark of NS. Steroids and other immunosuppressive agents are the mainstay of treatment, but patients may or may not respond to these therapies. Although most cases are idiopathic, NS has been described in patients with SLE, such as membranous nephropathy in class V LN [6]. Minimal change disease (MCD) and focal segmental glomerulosclerosis (FSGS) can also be rarely associated with SLE [7,8,9,10].
Clinically, proteinuria and hematuria are characteristic features in patients with LN and have traditionally been thought to be the result of immune complex deposition and endocapillary proliferation causing a disruption to the glomerular filtration barrier. However, in a subset of nephrotic lupus patients, there is no evidence of the endocapillary proliferation, necrosis or crescents, along with absence of subepithelial or subendothelial deposits. Instead, if the deposits are present, they are confined to the mesangium, and there is an extensive podocyte effacement, leading to nephrotic-range proteinuria, and is termed lupus podocytopathy (LP) [10,11,12,13]. The aim of this study is to report late onset LP as one of the under-recognized entities in patients with SLE who do not have overt LN. Here, we describe a 13-year-old female who presented with delayed onset MCD as a manifestation of LP seven years after the diagnosis of SLE without prior evidence of LN. This was a retrospective chart review case study.

A 13-year-old African American (AA) female presented with decreased urine output, puffiness of eyes and face, pitting edema of lower extremities and new onset shortness of breath for 4 days. There was no history of recent sore throat, abdominal pain, fever, usage of new medication including nonsteroidal anti-inflammatory agents or family or school stressors. The patient was diagnosed with SLE/autoimmune overlap syndrome with arthritis at the age of six years. Initial presentation at that time was with pericardial and pleural effusions (requiring a pericardial drain and chest tube placement), elevated anti-nuclear (ANA), anti-smith, anti-double-stranded (ds) DNA, ribonucleoprotein and SSA antibodies, Coombs positive autoimmune hemolytic anemia, and hypocomplementemia. The renal function, blood pressure and urinalysis were normal with no proteinuria or hematuria, indicating no renal involvement and hence the patient did not undergo renal biopsy initially. Initial management included intravenous pulse steroid and Rituximab therapy. The overlap syndrome remained in remission with every four weeks etanercept infusion.
Past medical history was significant for Triple X syndrome (Trisomy X), petit mal seizures, autism, attention deficit hyperactivity disorder, early puberty and steroid induced hypertension. Family history was not suggestive of lupus, NS, other autoimmune diseases, renal failure, dialysis or kidney transplantation.
On examination, vital signs showed an afebrile child with heart rate of 90 beats per minute, respiratory rate 16 per minute, blood pressure 150/110 mm Hg, and oxygen saturation of 98% on room air. Physical examination showed puffiness of eyes and face, decreased breath sounds bilaterally, basal rales and rhonchi, and 1+ bilateral pitting edema in the legs. There were no malar or discoid rash, oral ulcers or photosensitivity. Mental status was normal without seizures. There was no arthritis.

The patient was treated with albumin/diuretic infusions for the symptomatic relief of edema and a course of intravenous methylprednisolone 10 mg/kg daily for three days. Later, the patient was transitioned to oral steroid 60 mg/m2/day for six weeks, followed by 40 mg/m2 every other day for another six weeks. Home medications included amlodipine, enalapril, hydroxychloroquine, pantoprazole, and etanercept infusion every 4 weeks as a maintenance agent for the history of arthritis.

The edema resolved within two weeks. At two weeks follow-up, the urinalysis showed only trace proteinuria. The patient completed 12 weeks course of oral steroid and a follow-up spot urine protein creatinine ratio after 12 weeks was 0.1 mg/mg. Serum albumin had normalized. Renal function remained stable. Blood pressures were stable on amlodipine and enalapril. During the most recent follow-up after five months, the patient has not had relapse of the MCD.

Limitations of our report include absence of podocyte gene mutation testing, serum cytokines levels such as IL-13, and long-term follow-up. Genetic testing of the podocyte genes provide valuable information on the likelihood of steroid/immunosuppression responsiveness and risk of recurrence of NS post kidney transplantation should the NS progress to ESRD. Longer term follow-up is important to assess the risk of relapse and subsequent clinical outcome in these patients with LP.

This report highlights LP as another presentation of LN which is not included in the usual classification of LN. It also demonstrates MCD as a delayed renal manifestation of lupus in patients without renal involvement at the time of the diagnosis of SLE. LP represents a unique form of LN in patients with SLE. Current evidence suggests that LP is related to the SLE disease process itself rather than a mere coincidence. Hence, a renal histology is important for accurate diagnosis and proper management of NS in patients with SLE.

R.A. (Rasha Aly), X.Z., R.A. (Ratna Acharya) and K.U. made substantial contributions to the conception or design of the work; or the acquisition, analysis, or interpretation of data. R.A. (Rasha Aly) and K.U. have drafted the work and substantively revised it. R.A. (Rasha Aly), X.Z., R.A. (Ratna Acharya) and K.U. have approved the submitted version and agree to be personally accountable for the author’s own contributions and for ensuring that questions related to the accuracy or integrity of any part of the work, even ones in which the author was not personally involved, are appropriately investigated, resolved, and documented in the literature. All authors have read and agreed to the published version of the manuscript.

Given that the patient was a minor, a written informed consent was obtained from the parents of the patient to publish this paper. 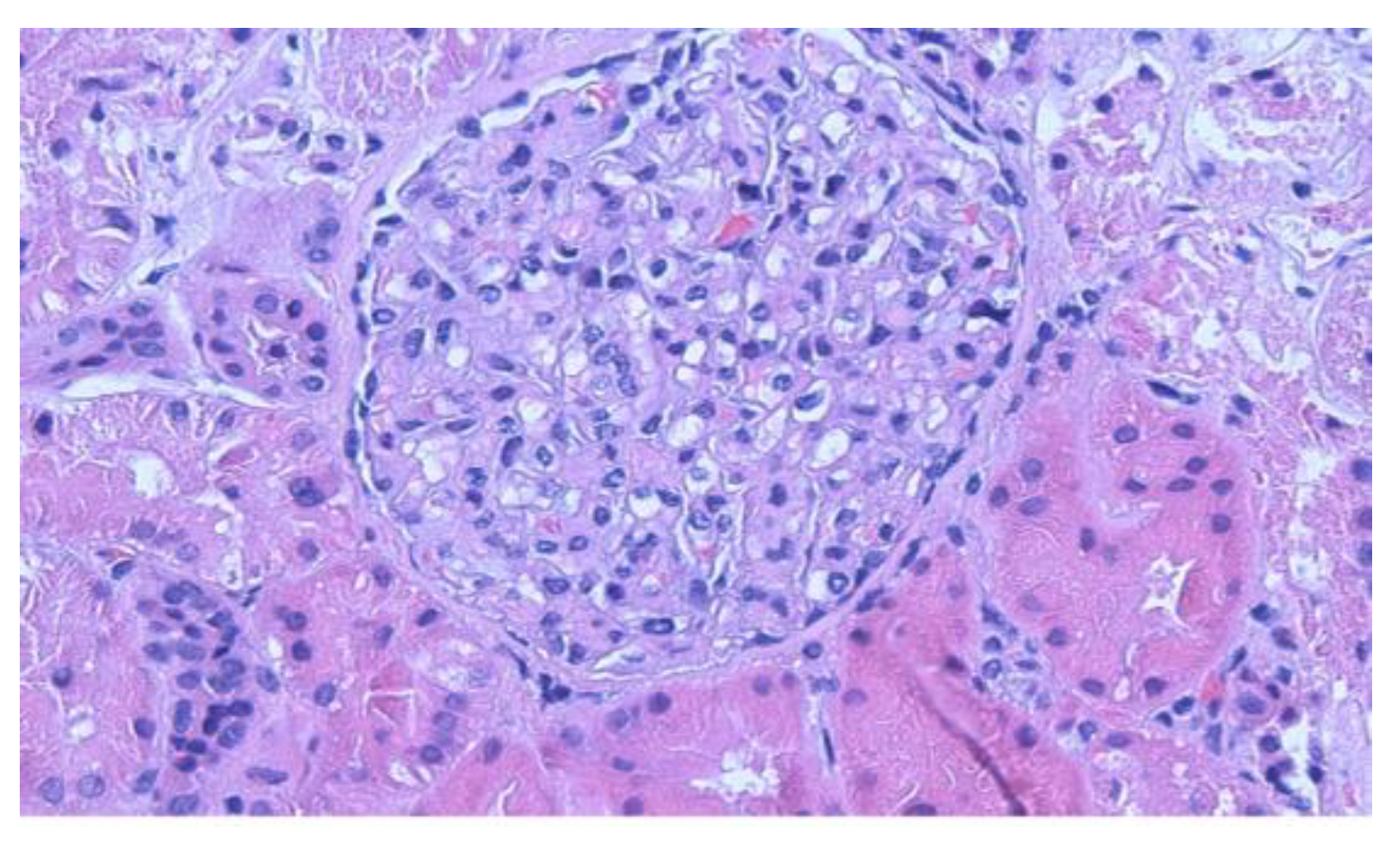 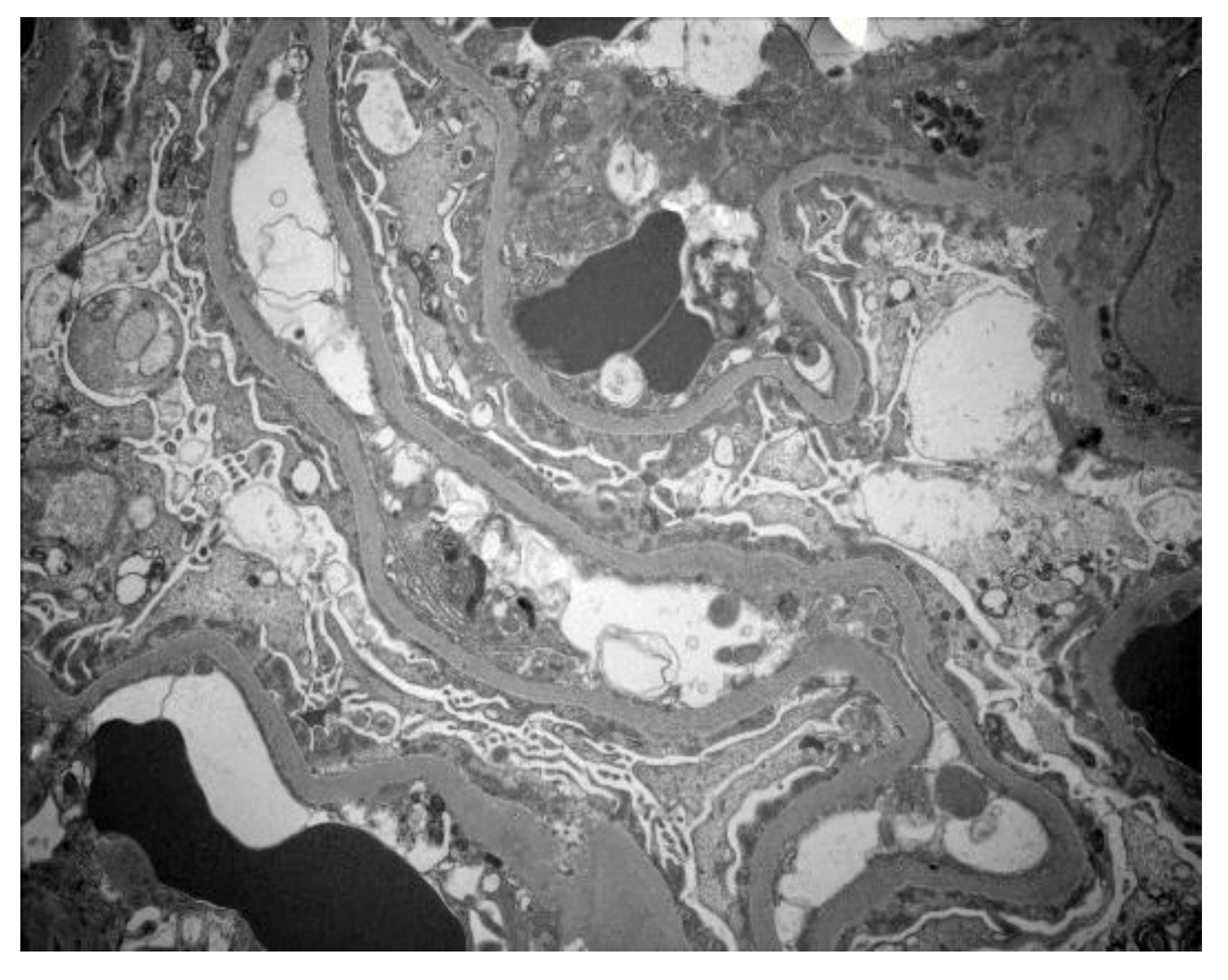