Endoscopic and Histopathological Findings of the Esophagus, Stomach, and Duodenum in Patients with Crohn’s Disease from a Reference Center in Bahia, Brazil

(1) The aim of the present study was to describe the endoscopic and histopathological findings in the esophagus, stomach, and duodenum in patients with Crohn’s disease. (2) Methods: This was a cross-sectional study that included patients receiving treatment from the inflammatory bowel disease outpatient clinic. Esophagogastroduodenoscopies with biopsies of the stomach and proximal duodenum were performed. Presence of Helicobacter pylori bacteria was assessed by Giemsa staining. (3) Results: We included 58 patients. Erosive esophagitis was identified in 25 patients (43.1%), gastritis was diagnosed in 32 patients (55.2%) and erosive duodenitis was found in eight (13.8%). The most frequent histopathological finding in the H. pylori-positive group was increased inflammatory activity in the gastric body and antrum, with a predominance of mononuclear and polymorphonuclear cells. In turn, the most frequent finding in the H. pylori-negative group was chronic inflammation with predominance of mononuclear cells. Focally enhanced gastritis was identified in four patients (6.9%), all of whom were negative for H. pylori. Granulomas were not observed. H. pylori infection was present in 19 patients (32.8%). (4) Conclusions: Nonspecific endoscopic and histological findings were frequent in patients with Crohn’s disease. Focally enhanced gastritis was uncommon and observed only in H. pylori-negative patients. The time from the diagnosis, patient age, and therapy in use may have influenced the nondetection of epithelioid granuloma.
Keywords: Crohn’s disease; gastritis; enhanced focally gastritis; granuloma; Helicobacter pylori Crohn’s disease; gastritis; enhanced focally gastritis; granuloma; Helicobacter pylori

The prevalence of upper gastrointestinal (GI) tract involvement in symptomatic patients with Crohn’s disease (CD) varies between 0.5 and 5% [1,2,3]. More recent observational studies, in which esophagogastroduodenoscopy (EGD) was performed as a routine part of the diagnostic evaluation, have demonstrated a higher frequency of both endoscopic and histopathological findings [4,5].
There is no recommendation to perform EGD in asymptomatic adult patients with CD. Studies performed in the pediatric population have demonstrated that the involvement of the upper GI tract has a higher prevalence; it is thus recommended to perform EGD with biopsies of the upper gastrointestinal tract routinely at the time of diagnosis in pediatric patients [6,7].
Similarly to the involvement of the lower digestive tract, endoscopic findings are not specific and include erosions, aphthous ulcers, longitudinal ulcers, strictures, and fistulas [8]. The main histological findings described are chronic inflammation, lymphoid aggregates, fibrosis, focally enhanced gastritis (FEG), and epithelioid granulomas [9,10]. The lower prevalence of H. pylori infection in patients with CD is a topic that is still debated, with studies showing conflicting results [11,12].
In the non-Caucasian population, these alterations are studied less often [13]. The aim of the present study was to describe the main endoscopic and histopathological findings of the esophagus, stomach, and duodenum in a sample of patients with CD being treated in a reference outpatient clinic for IBD (inflammatory bowel disease) in Brazil.

This was an observational, cross-sectional study that included patients with CD, aged 18 years or older, from June 2015 to April 2018. These patients were under treatment in one public reference unit for patients with IBD.
The CD diagnoses were based on clinical, laboratory, endoscopic, radiological, and histopathological findings, according to the ECCO (European Crohn’s and Colitis Organisation) guidelines [6,14]. Participants answered a questionnaire regarding clinical and demographic data. The Montreal classification [15] was applied and the Harvey Bradshaw Index (HBI) [16] was used for evaluation of disease activity. We considered any alcohol intake or cigarette use to be active alcohol consumption and active smoking. The presence of anemia and C-reactive protein (CRP) values were collected in medical records. Patients were instructed to discontinue the use of proton pump inhibitors (PPIs) for at least seven days and of nonhormonal anti-inflammatory drugs (NSAIDs) for at least 30 days prior to EGD, if they were being used. Exclusion criteria were as follows: uncompensated comorbidities and the use of anticoagulants or coagulopathies, which would be contraindications to performing EGD with biopsies.

The participants were submitted to EGD conducted by a single endoscopist (RCRC), who was blinded to the clinical and laboratory data. According to the protocol, two biopsies were performed of the body, antrum, and proximal portion of the duodenum (bulb and second portion) during the procedure. In addition, biopsies were obtained of any endoscopically altered areas. The Los Angeles [17], Sydney [18], and Sakita classifications were used for gastroesophageal reflux disease, gastritis, and ulcers, respectively.

Histopathological analyses were performed by a single pathologist (LARF), who was blinded to the clinical, laboratory, and endoscopic patient data. Biopsy samples were fixed in 10% buffered formalin and stained with hematoxylin and eosin. Giemsa staining was used to identify H. pylori bacteria.

The study was designed according to ethical and bioethical considerations, as well as the ethical guidelines of the 1975 Declaration of Helsinki and according to current norms. It was submitted and approved by the Research Ethics Committee of the Roberto Santos General Hospital, under number 1.115.522. The patients agreed to participate in the study and signed a free informed consent form before application of the questionnaire, review of the chart, and being submitted to the procedure (EGD with biopsies and histopathological study).

EGD showed changes in 51 patients (87.9%). The most frequent macroscopic alterations were edema, erythema, and erosions. The stomach was the site with the highest frequency of lesions, found in 40 patients (69%), compared to the lesions of the esophagus in 30 patients (51.7%) and of the duodenum in 22 patients (37.9%).
In the esophagus, the most frequent diagnosis was erosive esophagitis, present in 25 patients (43.1%) and classified as grade A (Los Angeles) in 21 of 25 patients (84%), grade B in three of 25 patients (12%), and grade C in one of 25 patients (4%). Aphthous ulcers located in the distal third were identified in one patient (1.7%).
In the stomach, gastritis was the most frequent finding, identified in 32 patients (55.2%), with the erosive type in 19 of 32 patients (59.4%), and the erythematous type in 13 of 32 patients (40.6%). The most frequent location of gastritis was the antrum, in 15 of 32 patients (46.9%), followed by concomitant involvement of the body and antrum in 12 patients (37.5%), and, less frequently, the involvement of the body in five patients (15.6%). The intensity was classified as mild in 26 patients (81.2%). Two active gastric ulcers (Sakita A2) and one duodenal ulcer (Sakita H1) were observed during EGD in one H. pylori-positive patient.
There was no association between the presence of erythema and gastric erosion and age, gender, time of diagnosis, smoking, alcohol intake, treatment, location, behavior, or activity of the disease.
The duodenum was the least affected site, presenting with a normal appearance in 36 patients (62.1%). Erosive duodenitis was the most frequent duodenal finding, present in eight patients (13.8%). Duodenal ulcers were identified in three patients (5.2%), two of whom were H. pylori-positive. Ulcer scars were identified in four patients (6.9%), two of whom were H. pylori-positive, and two of whom were H. pylori-negative.
No strictures or fistulas were identified in the esophagus, stomach, or duodenum.
The main endoscopic findings were similar between the patients in remission or active disease states.
The frequency of erosive esophagitis, gastritis, and duodenitis was similar between patients with or without upper GI symptoms. The endoscopic findings in patients with CD according to the presence or absence of upper GI symptoms are listed in Table 2.

Nonspecific endoscopic and histopathological findings in the esophagus, stomach and duodenum were frequent in patients with CD. No association was observed between symptoms and endoscopic findings. The most frequent endoscopic and histopathological findings in H. pylori-negative patients were antral erosive gastritis and inactive chronic gastritis, respectively. FEG was uncommon and reported only in H. pylori negative patients. The presence of H. pylori was associated with increased inflammatory activity in the body and antrum, with a predominance of mononuclear and polymorphonuclear cells. The time from diagnosis, patient age, and drug therapy in use may have influenced the nondetection of epithelioid granuloma. New studies evaluating UGI involvement at the time of diagnosis, including protocols for endoscopic biopsy and histopathological analysis aiming to improve the detection of more specific findings, could be crucial to defining the real prevalence of CD in the upper GI tract and finally deciding on the need or not to perform EGD in newly diagnosed adult patients with CD.

The study was designed according to ethical and bioethical aspects, as well as the ethical guidelines of the 1975 Declaration of Helsinki, according to current norms and was submitted and approved by the Research Ethics Committee of the Roberto Santos General Hospital, under number 1.115.522.

Written informed consent was obtained from the patients to publish this paper. 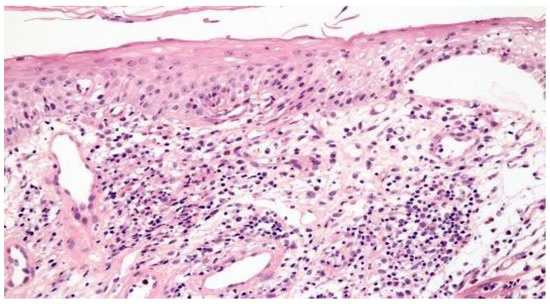 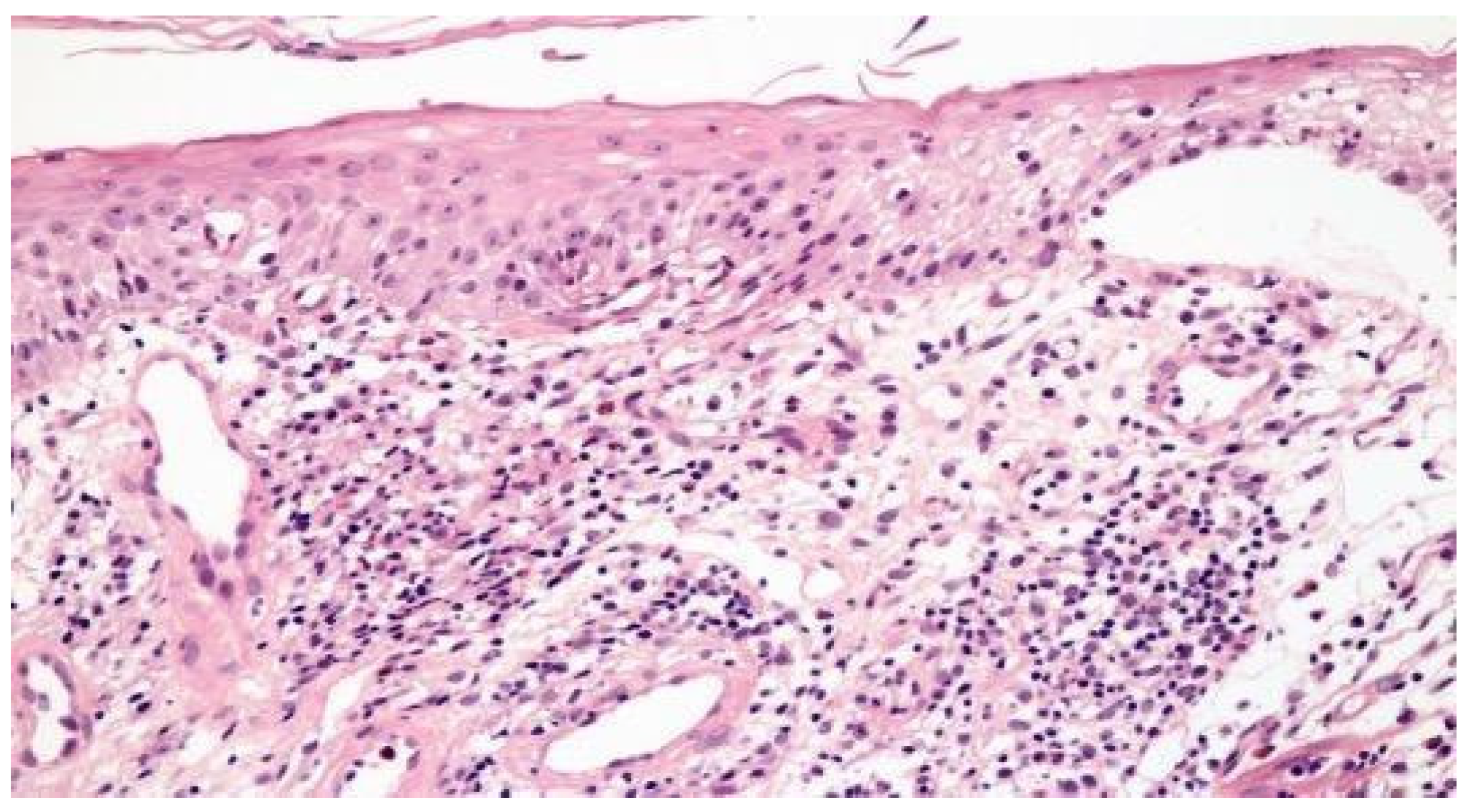