(1) Background: Several techniques for the treatment of pilonidal sinus disease (PSD) are in vogue, though none have emerged as the gold standard. Laying open (deroofing) and curettage under local anesthesia is one of the most straightforward procedures to treat PSD. In this study, the long-term follow-up in a large series was analyzed. (2) Methods: The laying open approach was performed for all types of consecutive PSD patients—simple, complicated, and abscess. The primary outcome parameter of the study was the healing rate. The secondary outcome parameters were operating time, hospital stay, time to resumption of normal work, and healing time. (3) Results: 111 (M/F–92/19, mean age-22.9 ± 5.7 years) consecutive patients were operated on and followed for 38 months (6–111 months). Of these, 24 had pilonidal abscesses, 87 had chronic pilonidal disease, while 22 had recurrent disease. Operating time and hospital stay were 24 ± 7 min and 66 ± 23 min, respectively. On average, patients could resume normal work in 3.6 ± 2.9 days and the healing time was 43.8 ± 7.4 days. Three patients were lost to follow-up. Complete resolution of the disease occurred in 104/108 (96.3%) patients, while 4 (3.7%) had a recurrence. One recurrence was due to a missed tract, while three recurrences presented after complete healing had occurred. Two patients with recurrence were operated on again with the same procedure, and both healed completely. Thus, the overall success rate of this procedure was 98.1% (106/108) with a recurrence rate after first surgery of 3.7% over a median follow-up of 38 months. (4) Conclusions: Pilonidal disease managed by laying open (deroofing) with curettage under local anesthesia is associated with a high cure rate. This procedure is effective in treating all kinds of pilonidal disease (simple, complicated, and abscess).
Keywords: pilonidal; lay open; deroofing; curettage; sinus pilonidal; lay open; deroofing; curettage; sinus

Though pilonidal sinus disease (PSD) was first defined as far back as 1880 [1], its treatment is still not definitive. Several treatment options have been advocated for PSD, including incision and drainage for acute abscess [2], wide excision and leaving it open to heal by secondary intention [3], or wide excision followed by closure of the resulting wound. The wound closure may be in the midline [4], or a flap may be utilized with the twin purposes of releasing tension in the wound and flattening the contour of the buttocks. Several types of flaps have been used for this purpose, including Karydakis flap [5], Z-plasty [6], Limberg flap [7], Bascom flap [8], etc. Of late, laser and endoscopic procedures have been described to treat PSD with a high success rate [9,10]. Although these extensive procedures increase the magnitude of the surgery and the risk of tissue loss, none of them are established as the gold standard procedure to treat PSD [7,8].
The laying open (deroofing) with curettage under local anesthesia (LOCULA) procedure is a simple procedure with several distinct advantages [11]. Our initial short-term experience with this procedure in 33 patients was reported in 2015 [11]. In the present study, the long-term success rate of this procedure in a much larger series (111 patients) is evaluated.

In a prospective cohort, all consecutive patients suffering from sacrococcygeal pilonidal disease operated by LOCULA procedure between 2011 to 2020 at a single center were included in the study. A single surgeon performed all the surgeries. Patients with all types of PSD—chronic disease, recurrent disease, and PSD presenting with an abscess—were included. The primary outcome parameter of the study was complete healing of the pilonidal sinus. The secondary outcome parameters were operating time, hospital stay, and resumption of everyday activities. Informed written consent was taken from every patient. Approval was granted by the Indus International Hospital-Institute Ethics Committee (IIH-IEC) via approval number: Indus hospital/EC/01-11.

The procedure was performed under local anesthesia in a day-care setting. The patient was placed in the prone position, and an adhesive tape was used to spread the buttocks. Twenty ml of 2% lignocaine with adrenaline (1:100,000) was used for local anesthesia. The anesthetic solution was injected all around the sinus tract intended to be deroofed. Even in patients with acute abscess, anesthetic solution infiltration around the abscess led to adequate anesthesia with satisfactory pain relief. Initially, it was expected that local anesthesia might not work in patients with acute pilonidal abscess. However, it proved effective in every patient, and general or spinal anesthesia was not required. The sinus opening was probed gently to gauge the direction and length of the tract. A curved artery-forceps was inserted in the sinus tract, and the overlying tissue was incised with electrocautery (Figure 1).
All the branches were identified and laid open in continuity. The debris and hair were extracted from the sinus, and infected granulation tissue was removed thoroughly by rubbing with dry gauze or with the help of a curette (Figure 1). The overlying skin edges were trimmed to convert the sinus cavity into a saucer-shaped wound. The wound was again checked thoroughly for any branches. The lateral wall and the base of the sinus were left intact, but their epithelium was cauterized. No marsupialization or closure of the wound was done. The wound was packed lightly with gauze.
After the procedure, the patient walked to the recovery room and was instructed to lie in a supine position putting full bodyweight on the operated site for half an hour. After this, if the wound-site dressing did not show any active bleeding, the patient was discharged from the hospital with instructions to resume his/her daily routine. However, avoidance of strenuous activities for a week was recommended.

The dressing was removed on the next (first postoperative) day in the out-patient department. The wound was rubbed gently with dry gauze. This was done once or twice a day so that the wound edges did not adhere, and healing occurred by secondary intention. Follow-up was done weekly till the wound healed completely.
Once wound healing was complete, the patient was instructed to regularly remove hairs all around the wound and to apply talcum powder around the scar in the intergluteal cleft for a minimum of five years [11]. (India being a hot and humid country, most patients report increased sweating and moistness in the intergluteal region. The persistent moisture macerates the skin and may predispose to the development of pilonidal sinus. Talcum powder application helps keep the intergluteal area dry). The patient was also instructed to report in case there was any pain, swelling, or pus discharge from the scar.

A total of 111 (M/F–92/19, mean age: 22.9 ± 5.7 years, range: 15–39 years) consecutive patients were operated on over nine years and followed up for a median of 38 months (6–111 months). Of these, 24 (21.6%) patients had a pilonidal abscess, 87 (78.4%) were suffering from chronic pilonidal disease, 22 (19.8%) had recurrent disease (12, after wide excision with open healing; 3, after wide excision and midline closure; and 7, after wide excision and flap surgery). (Table 1).
Operating time and hospital stay were 24 ± 7 min and 66 ± 23 min, respectively. On average, patients could resume regular work in 3.6 ± 2.9 days and the healing time was 43.8 ± 7.4 days. Three patients were lost to follow-up. Complete healing of the disease was seen in 104/108 (96.3%) patients, while 4 (3.7%) had a recurrence (Table 2).
One recurrence was due to a missed tract, while three recurrences were seen well after complete healing of the wound. Two of the four patients with recurrence were operated on again with the same procedure (LOCULA), and both healed. Thus, the overall success rate of this procedure was 106/108 (98.1%) with a recurrence rate of 3.7% after first surgery over a median follow-up of 38 months. (Table 2). In abscess patients (n = 24), LOCULA was performed as the single-stage definitive procedure, and all the patients healed. In 5/108 (4.6%) patients, minor bleeding occurred from the postoperative wound and it was controlled easily by gentle pressure with a gauze pad. No patient required any surgical intervention for the bleeding.

This is one of the largest studies performed to treat PSD with an extended follow-up, demonstrating that laying open and curettage under local anesthesia has a high overall cure rate of 98.1% with a recurrence rate of 3.7% after first surgery over a median follow-up of 38 months. It is effective in simple and complicated PSD (recurrent, multiple branches, or associated abscess). This procedure can be done under local anesthesia as day-care surgery and is associated with minimal morbidity. Apart from this, it can be repeated easily in case of a recurrence, is simple, easy to learn and replicate, does not require any expensive equipment, and does not alter the buttock contour. Randomized controlled trials are needed to corroborate the findings of the study.
The present study demonstrates that laying open and curettage of pilonidal sinus disease under local anesthesia (LOCULA) is associated with a remarkably high success rate on long-term follow-up.

The study was conducted according to the guidelines of the Declaration of Helsinki, and approved by the Institutional Ethics Committee of Indus International Hospital(IIH-IEC) via approval number: Indus hospital/EC/01-11.

The data presented in this study are available on request from the corresponding author. The data are not publicly available due to privacy and ethical issues.

We would like to acknowledge the help provided by Sushil Dawka for his kind help in revising the manuscript. 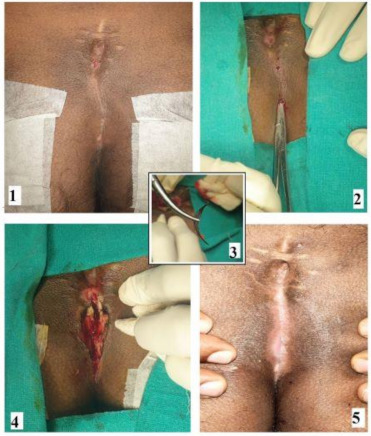 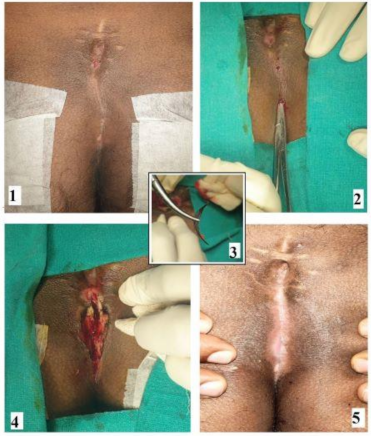 Table 2. Results.
Table 2. Results.
© 2021 by the authors. Licensee MDPI, Basel, Switzerland. This article is an open access article distributed under the terms and conditions of the Creative Commons Attribution (CC BY) license (http://creativecommons.org/licenses/by/4.0/).
We use cookies on our website to ensure you get the best experience. Read more about our cookies here.
Accept
We have just recently launched a new version of our website. Help us to further improve by taking part in this short 5 minute survey here. here.
Never show this again