This paper provides a summary of mass COVID-19 testing of almost the entire population in Slovakia by antigen tests. We focused on the results delivered by two testing rounds and analyzed the benefits and weaknesses of such type of testing. We prepared mathematical models to critically examine the effectiveness of the testing, and we also estimated the number of potentially sick people that would become infected by those marked as positives by antigen tests. Our calculations have proven that antigen testing in hotspots can flatten the curve of daily newly reported cases significantly, but in regions with low-risk of COVID-19, the benefit of such testing is questionable. As for the regions with low infection rates, we could only estimate the proportion of true and false-positive cases because the national health authority had not validated the results by RT–PCR tests. Therefore, this work can serve as an introductory study on the first nationwide testing by antigen tests in Europe.
Keywords: nationwide antigen testing; COVID-19; estimation of infection rate nationwide antigen testing; COVID-19; estimation of infection rate

As a starting point, the four most affected districts in Slovakia were chosen for trial testing (23–25 October 2020). This round primarily served as an initial stage for nationwide testing that was about to be performed during the next weekend (two days). Every citizen aged between 10 and 65 had to visit one of 182 testing points or stay in home quarantine for 10 days (curfew). Slovak government had bought antigen tests that had to meet minimal criteria defined as follows: specificity higher than 99% and sensitivity higher than 93% (in laboratory conditions) [6]. Slovakia had already announced a state of emergency at the beginning of November and implemented restrictions to reduce the community virus spread, such as the mandatory wearing of face masks outside, food and beverage service providers can operate only via delivery, serving hatches or outdoor seating service. All public events are now allowed.
Collection points for sampling during the COVID-19 testing were situated mostly in schools and local government buildings, with an emphasis on having outdoor waiting areas (e.g., school playground). All participants had to wait for their results delivered in the form of a medical certificate. The testing process was secured by military forces, medical staff and public servants. Each collection point was dimensioned to carry out 330–350 tests per day. The interval between the two tests was approximately 2 min (30 tests per hour), and a maximum of 15 people could be in the waiting area at the same time (with social distance at least 2 m). Unfortunately, we have no data on the combination of tests from the selected distributors that were used for each testing. Since we wanted to create prediction models for estimation of the number of potentially positive cases (that would be infected by the ones discovered during the trial round), we designed a realistic and so-called less accuracy-testing (LAT) scenario (based on documented specificity of the tests). We carefully read the above-mentioned studies, which have proven that accuracy receives considerably lower value outside than in the laboratory conditions. In a realistic scenario, we set specificity to 99%, while the LAT scenario counted with specificity 97.5%. Sensitivity was not an important parameter for modeling because we had no possibility to identify false-negative cases.

2.1. Mathematical Models for Estimation of Infected People within the Population

There are two commonly used models on how to describe virus behavior within a population. The first one is the exponential model. The exponential model estimates an uncontrolled disease expansion. The basic formula can be defined as follows [16,17]: where stands for the initial value of the model, represents the day of the prediction and represents the growth factor. Another mathematical model we used was the logistic model, defined by the second equation [15,16]:
In this formula, refers to the infection speed, could be considered as incubation rate, denotes an upper boundary of cumulative positive cases estimation and finally, stands for the day of prediction.

2.2. Was the Mass Testing Safe for People?

We also focused on risk analysis—the probability of being close to (meet) a potentially infected person during the testing procedure. Trial testing showed that people were exposed to a risk of infection due to spending approximately 1 h at the testing place (waiting in the queue, taking samples, waiting for results). By using exponential distribution, the probability that at least one individual is infected in a group of a size n (number of citizens that are in the common area at the same time) is calculated in the following way: where , represent a specific part of collection point operating hours (see explanation below formula 4), is a total testing time in hours per day, and is given as: where stands for the total number of testing days and represents the total number of expected positive cases that visit one testing point. The integral boundaries were set in accordance with the following situations: in case of attending the collection point immediately after its opening, a participant can meet only with those who arrive within the next 1 h after him. A similar situation happens at the end of the testing day—a participant can meet only those who have already arrived a maximum 1 h before him (both cases are represented by interval 0–1). We also incorporated the 1 h break between the morning and afternoon opening hours of the collection point, which also results in the same situation as described above thus represents the number of hours (in our case four) of limited contact with others during the testing procedure. Double integral reflects on the situation when the participant visits the collection point within the first hour from the start of the testing (or if there is less than 1 h left to the end of the testing period). In this case, parameter lies in the open interval (0,1).
If a participant gets tested any other time, they can meet with those who came before him (maximum 1 h), as well as with those who came after him (the testing procedure takes one h). This situation is represented by the interval from 0 to 2 and took -hours of one testing day (in our case 7 h).

This paper provides a summary of the first nationwide mass testing by antigen tests in Europe. We proposed mathematical models trying to estimate the impact of self-isolation for test-positive cases which would (probably) not be tested by RT–PCR due to their asymptomatic sickness. Our prediction has proven that in hotspots, antigen testing can significantly slow down the spread of illnesses. In regions with low positivity expectation, positive cases marked by antigen tests should be retested by RT–PCR for validation. However, in general, nationwide testing by antigen tests has identified many potentially infected individuals within the population that would not be discovered, yet they would be involved in the spread of the virus, causing COVID-19. All public data related to the past and ongoing epidemical situation in Slovakia is available here [26].

This research was supported by the institutional research of the Faculty of Operation and Economics of Transport and Communications—University of Zilina, no. 3/KKMHI/2020.

The data presented in this study are openly available in GitHub Repository, reference number [26]. 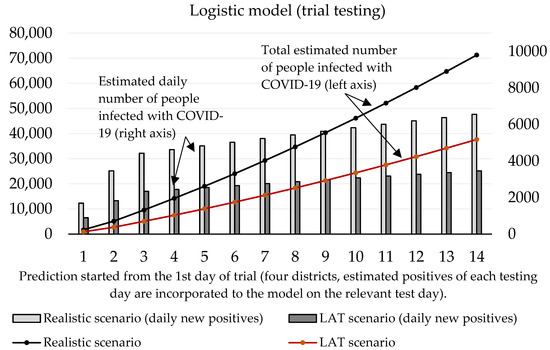 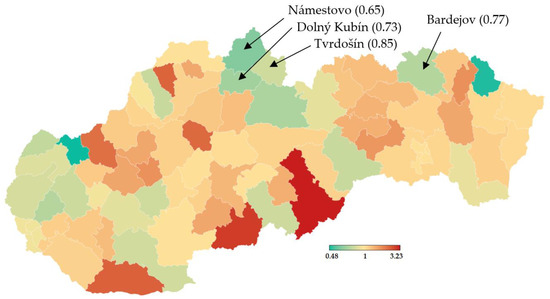 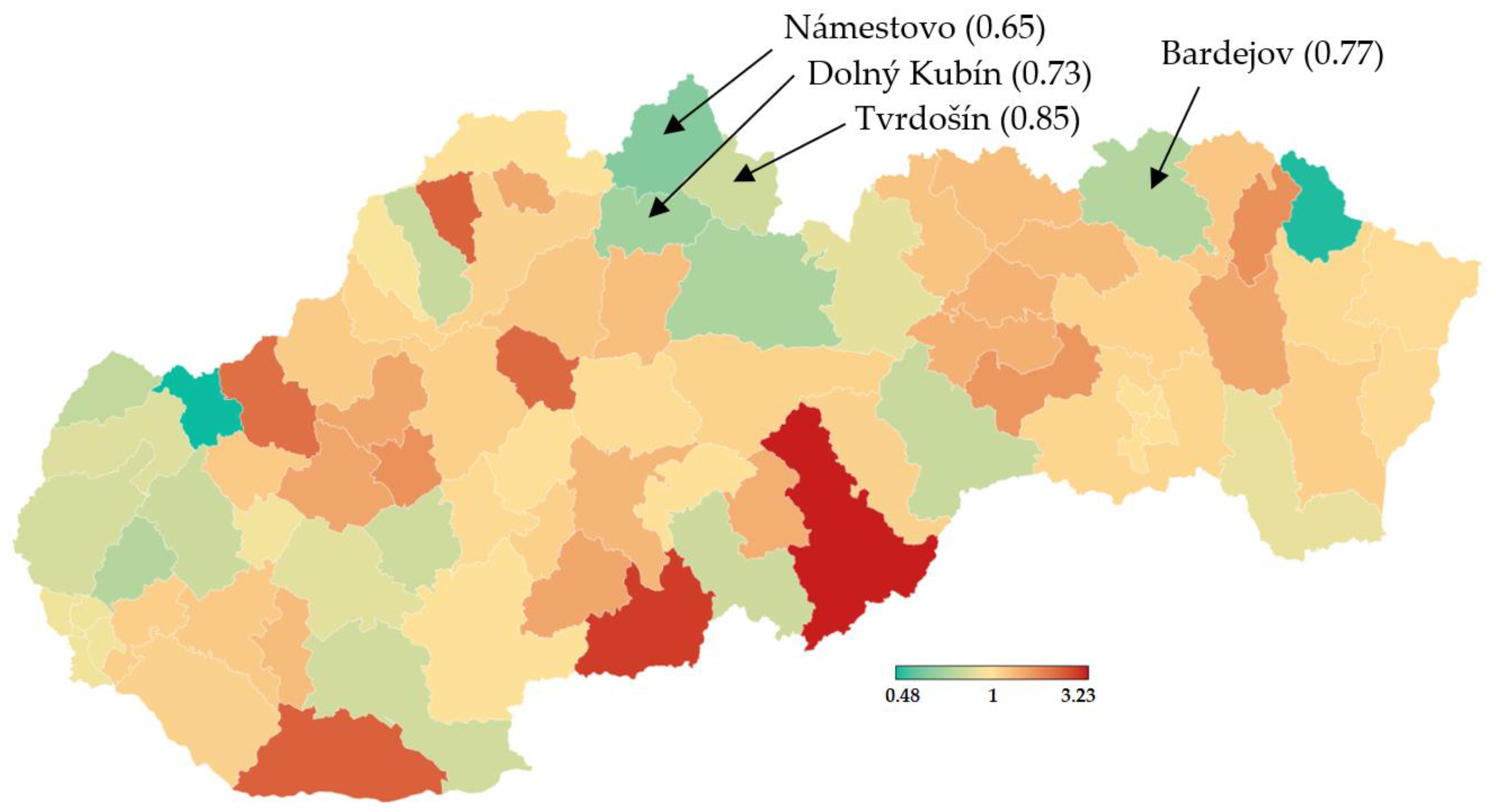 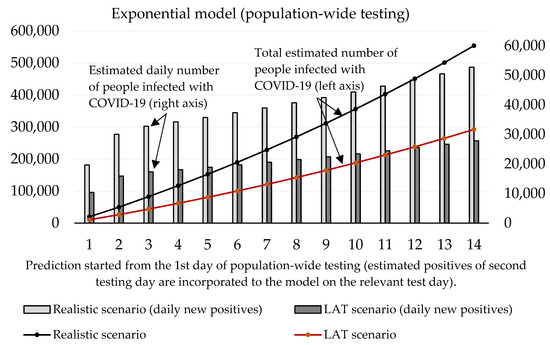 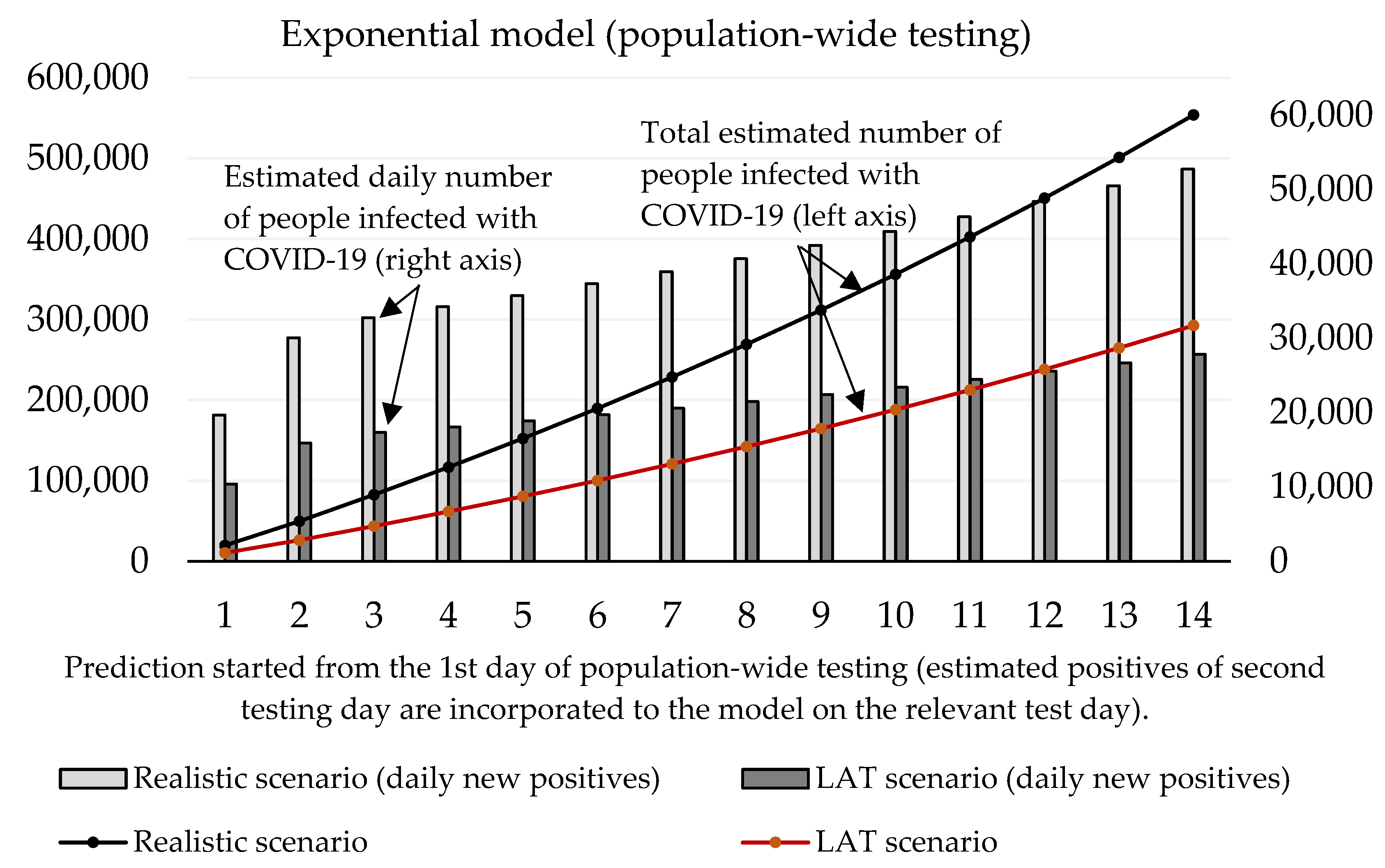 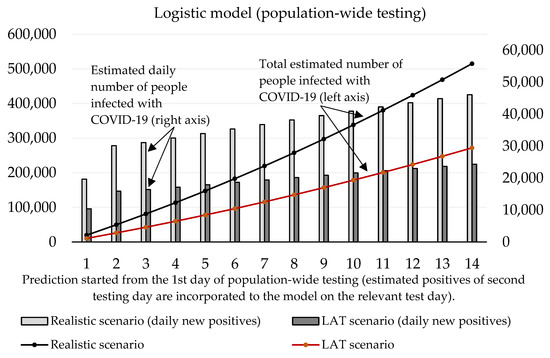 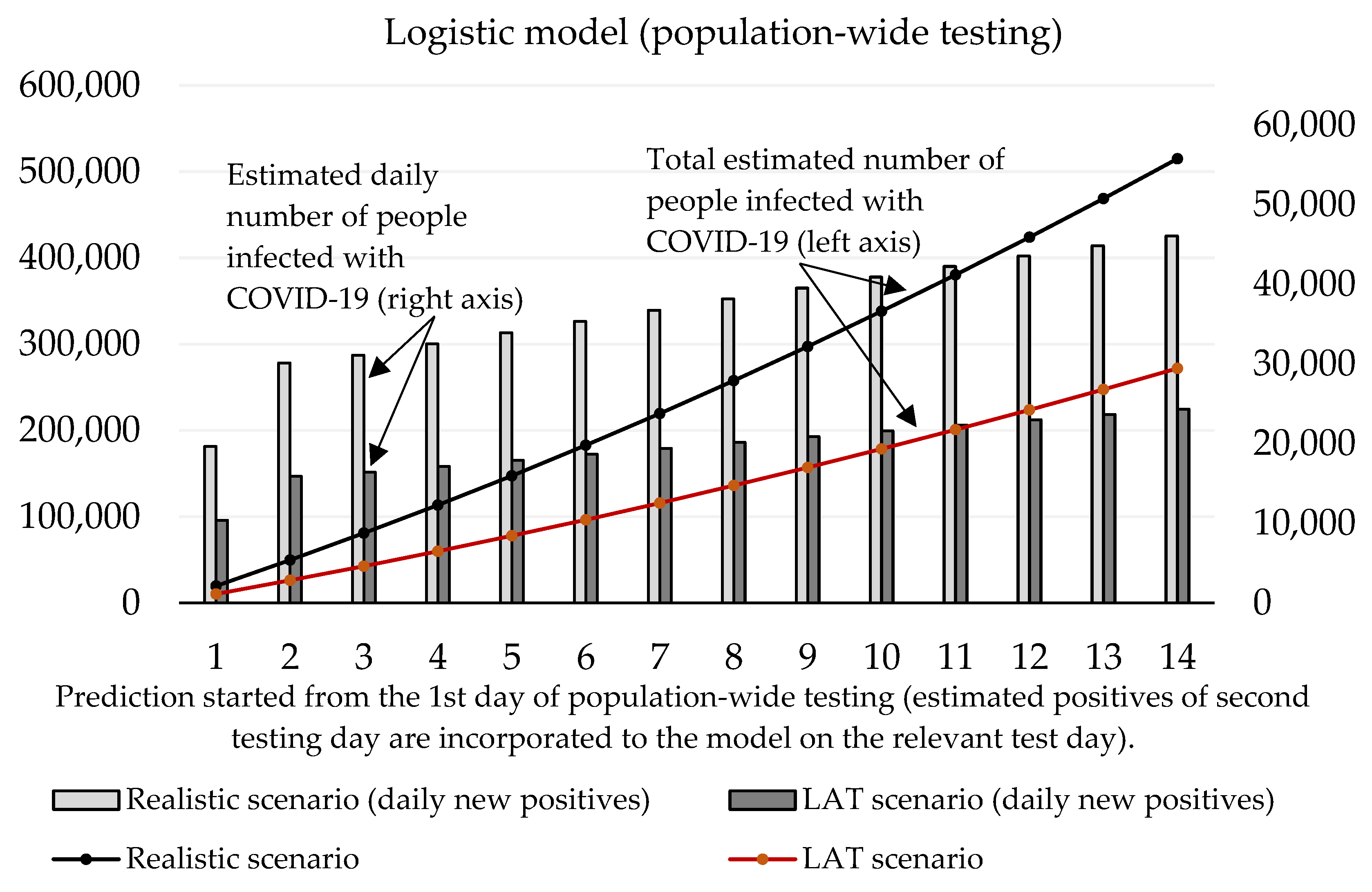 Table 2. Summary of trial testing (23–25 October 2020) [20].
Table 2. Summary of trial testing (23–25 October 2020) [20].
1 Total number of RT–PCR test positive cases (tested separately) during the testing period in four districts [18]. Theoretically, there is a possibility that someone who has been tested by PCR tests also visited one of the collection points for antigen testing on the same day or during the following days. However, we have no information on this.

Table 5. Summary of nationwide testing (from 31 October–1 November 2020) [20].
Table 5. Summary of nationwide testing (from 31 October–1 November 2020) [20].
1 Total number of RT–PCR laboratory tests performed separately during the testing period [18].
© 2021 by the authors. Licensee MDPI, Basel, Switzerland. This article is an open access article distributed under the terms and conditions of the Creative Commons Attribution (CC BY) license (http://creativecommons.org/licenses/by/4.0/).
We use cookies on our website to ensure you get the best experience. Read more about our cookies here.
Accept
We have just recently launched a new version of our website. Help us to further improve by taking part in this short 5 minute survey here. here.
Never show this again