Overlapping Phenotype of Cardiomyopathy in a Patient with Double Mutation: A Case Report

Autosomal dominant polycystic kidney disease (ADPKD) is the most common monogenic renal disorder, implies a progressive loss of renal function and accounts for 4% to 10% of patients with end-stage renal disease (ESRD) [1,2]. The disease, which occurs worldwide with an estimated prevalence of 1:400 to 1:100, is characterized by the age-dependent growth of renal cysts such that ESRD typically ensues during mid adulthood [3,4,5].
Mutations in Polycystic Kidney Disease 1 and 2 (PKD-1 and PKD-2, respectively) genes have a well-defined role in uncontrolled cystogenesis in both kidneys, the hallmark of the disease, as well as in the liver, and less frequently in the pancreas, seminal vesicles and arachnoid membrane [1,2,6,7,8,9,10,11,12,13,14]. Approximately 85% of ADPKD cases are caused by mutations in the PKD1 gene [MIM 601313], which is located on chromosome 16p13.3, while the remaining cases are due to mutations in PKD2 [MIM 173910], located on chromosome 4q21 [9,10].
The protein products of PKD1 and PKD2, polycystin-1 (PC1) and polycystin-2 (PC2), are membrane proteins that probably form a functional complex [15,16,17,18,19]. They have been shown to localize predominantly, although not exclusively, in primary cilia and mediate the sensitivity of kidney epithelial cells to fluid shear stress [6,7,8]. PC1 has been proposed to be a mechanosensitive molecule, given its large extracellular domain and remarkable mechanical strength [1]. The distribution of the polycystin proteins at different subcellular locations is required for them to orchestrate a network of signaling pathways that have been implicated in the pathogenesis of PKD [8,20].
PC1 or PC2 dysfunction may result in decreased intracellular calcium inflow with increased 3′, 5′-cyclic adenosinemonophosphate (cAMP) production and the activation of mechanisms which contribute to cyst cell growth by stimulating both epithelial cell proliferation and transepithelial fluid secretion [21]. Indeed, relevant downstream responses of the changed calcium signaling ultimately lead to increased proliferation and increased apoptosis [22]. Factors impacting upon disease progression include the level of PKD protein expression and the penetrance of pathogenic alleles [23,24]. However, both ADPKD type 1 and type 2 share the full spectrum of renal and extrarenal manifestations, although type 2 has a delayed onset compared to type 1 [1,2,25,26,27]. In type 2 patients, the common complications of ADPKD, such as hypertension, hematuria and urinary-tract infection, seem to be milder than in type 1 patients at the same age. The median age at death or onset of end-stage renal disease has been reported as 53 years in type 1 patients and 69 years in type 2 [25].

The renal phenotype in patients with ADPKD ranges from elderly patients without renal failure to rare cases of enlarged kidneys that are detected in utero [28]. The disease course is highly variable, as a significant minority of patients do not reach ESRD even in old age, while a small number exhibit early-onset disease, with a diagnosis made in infancy by the identification of enlarged echogenic kidneys.
Renal cyst expansion results from aberrant proliferation of the cyst wall epithelial cells and the accumulation of fluid within the cavity of the cyst. There is increased extracellular matrix remodeling as the cyst invades the adjacent parenchyma, leading to abnormal matrix deposition and fibrosis. The gradually growing renal cysts start to develop in utero and can originate from all areas of the kidneys, although cysts usually form in the distal regions of the nephron and the collecting duct [29,30,31,32,33].
Impaired urinary concentrating capacity has been well documented as common even in early stages [1,26,27,28].
Another important feature of ADPKD is the increase in plasma vasopressin concentrations. This defect is often attributed to the disruption of the medullary architecture, because its presence and severity correlate with the extent of the cystic disease. There is substantial evidence that the urinary concentrating defect and raised vasopressin concentrations could contribute to cystogenesis [34,35,36]. They might also contribute to the glomerular hyperfiltration seen in children and young adults, the development of hypertension and chronic kidney-disease progression [37].
Another early functional defect is a reduction in renal blood flow, likely due to the development of cysts with changes in intrarenal pressures, and to neuro humoral or local mediators [38,39,40]. As mentioned above, the identity of the mutated gene in patients with ADPKD explains part of the phenotypic variability observed in clinical practice, so that patients with a mutation in PKD1 have earlier-onset ESRD, lower glomerular filtration rate (GFR) and larger kidney volumes than patients with a mutation in PKD2 [1,25,41].

Even though enlarged cystic kidneys are the most obvious phenotype in ADPKD, cardiovascular disorders are the main complication contributing to both morbidity and mortality [42]. Systemic arterial hypertension is an early finding, occurring in about 60% of patients prior to a significant decline in GFR [3]. In particular, hypertension is observed in patients with ADPKD about a decade earlier than in the general population and even before the loss of renal function [43,44,45]. Although the mechanism underlying hypertension is not completely understood, the up-regulation of the renin angiotensin aldosterone system (RAAS), due to cystic compression of the renal vasculature, is considered a key mechanism in the pathogenesis of hypertension in ADPKD, as it leads to an increase in vascular resistance, and contributes to cardiac hypertrophy [46,47]. The RAAS pathway is the subject of clinical trials in patients with ADPKD in the HALT study, a US multicenter trial conducted on about 1000 ADPKD patients for 5.5 years. The benefits of blood-pressure control by antihypertensive drugs on patients with ADPKD have been largely demonstrated [48]. In patients with eGFR above 60 mL/min/1.73 m2, a target blood pressure of 110/70 mm Hg was suggested, especially in young patients with a high progression risk [49], while a target blood pressure below 120/80 mm Hg was recommended in chronic kidney disease stage 3 [50]. Thus, the aggressive control of hypertension in ADPKD patients appears to be clinically necessary and practically relevant. Nevertheless, as hypertension is likely dependent on the interaction of hemodynamic, endocrine and neurogenic factors, it has been postulated that mechanisms including increased sympathetic nerve activity [51], increased plasma endothelin-1 concentrations [52] and insulin resistance [53,54] contribute to the pathogenesis of hypertension in ADPKD. These theories can account for the high prevalence of hypertension but fail to explain why hypertension is frequently observed in patients with ADPKD, including children, even before the onset of renal insufficiency [55,56].
The PKD genes are expressed in a wide range of tissues beyond the kidney, and their expression is developmentally regulated in most of these tissues [57,58]. The fact that PC1 and PC2 are expressed in vascular smooth muscle and endothelial cells suggests that a reduced polycystin protein function in the vasculature could play a primary role in the early development of hypertension [59,60].
The primary dysfunction of the PC1 and PC2 complex results in decreased intracellular calcium inflow, with enhanced vascular smooth muscle contractility in response to adrenergic stimulation [61], increased muscular cell proliferation and apoptosis [62], and impaired endothelial-dependent vasorelaxation [63], functional abnormalities that might play a role in vascular remodeling and the early development of hypertension [64].

The reduced expression of the polycystin proteins (haploinsufficiency) in the endothelial cells and vascular smooth muscle cells of most blood vessels, including the aorta and cerebral arteries, are likely to cause the vascular abnormalities in patients with ADPKD [59,65].
The functions of PC1 and PC2 in the vasculature indicate that they have a crucial role in mechano-sensation [66,67,68,69]. In endothelial cells, the proteins are involved in fluid-shear stress sensing, thereby regulating calcium signaling, and there is NO release or vasodilatation in response to the increased blood flow [70,71,72,73,74,75,76,77]. In vascular smooth muscle cells, the polycystins regulate pressure sensing by modulating the activity of the stretch-activated cation channels and myogenic contraction [78,79,80]. A loss of myogenic tone may contribute to aneurysm formation owing to an increase in arterial wall stress [81,82].
Indeed, the risk of cerebral aneurysms is higher in families with a positive family history of ADPKD than in those without, probably because of modifying genes [83,84]. Moreover, patients with ADPKD are more prone to coronary arteries aneurisms and acute dissection, which are a source of coronary syndromes and death [85,86,87]. Likewise, primary defects in vascular structure may lead to acute aortic dissection, that occurs in ADPKD patients more frequently than in the general population [88,89,90].

Taken together, data from clinical and experimental studies provide compelling evidence that the cardiovascular complications of ADPKD are due at least in part to primary manifestations of the mutant proteins. Considering the importance of the polycystin proteins in cardiac development and myocardial function, the heart should be regarded as a target organ in ADPKD patients. Understanding the pathophysiologic mechanisms of heart involvement may be the foundation of novel therapy development.

L.S.: proposed the idea, proposed the structure of the paper, wrote the paper; G.G.: provided a substantial contribution to the interpretation of data from the research literature; G.E.: critically appraised the paper, made final suggestions. All authors have read and agreed to the published version of the manuscript. 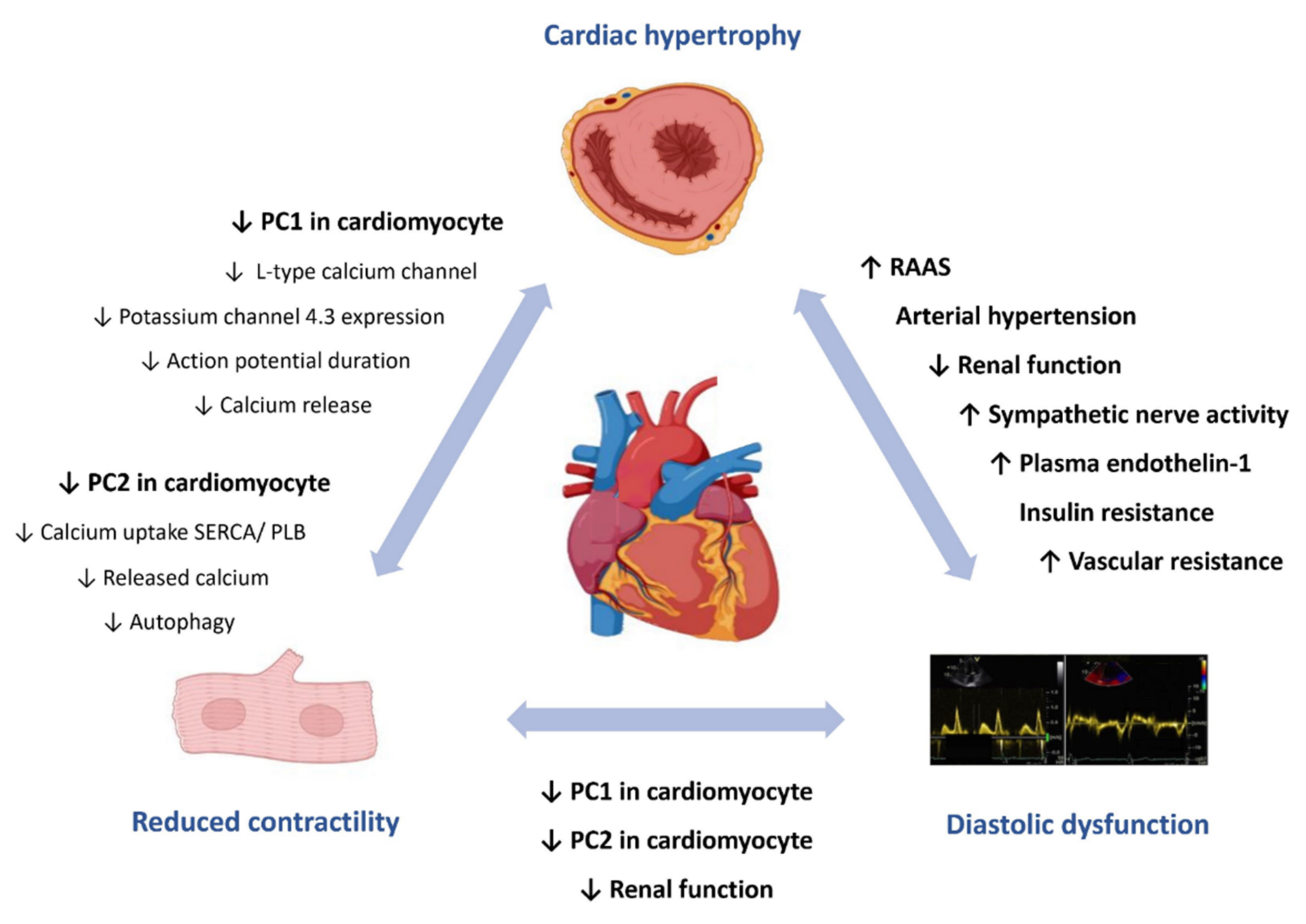