Mosaic Fabry Disease in a Male Presenting as Hypertrophic Cardiomyopathy

Fabry disease is a rare X-linked lysosomal storage disorder (MIM 301500). It is an inborn error of glycosphingolipid metabolism, resulting from a deficiency or total absence of the alpha-galactosidase A (α-Gal A) enzyme [1]. This enzyme deficiency results in the accumulation of globotriaosylceramide (Gb3) in a number of cell types, leading to complex, progressive, multisystem disease. In affected males, the usual presentation is of episodic crises in childhood of severe pain in the extremities (acroparesthesia), angiokeratomas (vascular cutaneous lesions), sweating abnormalities, and characteristic corneal and lenticular opacities [2,3]. Gradual deterioration of renal function to end-stage renal disease (ESRD) usually occurs in the third to fifth decade [2]. Cardiac involvement in Fabry disease is common, and typically cardiac hypertrophy develops, often with a concentric non-obstructive pattern mimicking hypertrophic cardiomyopathy (HCM) due to variants in genes encoding components of the sarcomere [4]. The precise mechanism resulting in the degree of cardiac hypertrophy is unknown. Estimates of incidence range from as high as 1 in 40,000 to 1 in 117,000 live male births [5,6].
Males with Fabry disease are hemizygous for a loss of function GLA allele [7]. Females are heterozygous for a loss of function allele and are cellular mosaics due to random X-chromosome inactivation. This mosaicism results in a wide spectrum of phenotype with a later age at the onset of symptoms, and frequently milder disease [8]. Often manifesting carrier females present with cardiac involvement [8].
Males with greater than 1% α-Gal A activity may have different clinical presentations with the development of left ventricular hypertrophy and arrhythmia later in life [2,3].
The case presented here is of a middle aged male presenting with arm pain, which triggered an electrocardiogram (ECG) that ultimately revealed co-incidental cardiac hypertrophy and normal α-Gal A enzyme levels. Genetic studies revealed a mosaic pathogenic variant in GLA consistent with Fabry disease. The mosaicism explains the late onset milder disease presentation and low to normal enzyme activity in blood spot and plasma, and this suggests that α-Gal A activity in the normal range does not exclude a diagnosis of Fabry disease.

Here, we describe the diagnosis of Fabry disease due to a somatic pathogenic variant in GLA in a man with low, but normal levels of alpha-galactosidase. The diagnosis in the affected individual is vital, both in terms of effective treatment and determining the level of risk to his close relatives. He commenced ERT following the genetic diagnosis which would not have been available to him based on his enzyme assay results, with improvement to his cardiac function 18 months since commencing therapy. The accurate diagnosis facilitated renal, ophthalmological and skin screening, and early stage asymptomatic renal disease has been discovered and treated.
The GLA c.901C>T pathogenic variant has been reported previously [10,11,12,13,14,15] and on a number of occasions in a public sequence variant database [19]. Where clinical information has been provided, individuals hemizygous for this variant have been affected with multisystem features of Fabry disease, including joint pain and kidney disease [11], skin, ophthalmological, renal, neuropathic and cardiac involvement [12], and a predominantly renal disease presentation with cardiac involvement [14]. One male with this variant who presented with renal disease had symptomatic heterozygote female relatives [15]. His mother experienced acroparesthesia and neuropathic pain in her thirties, with angiokeratoma, and cornea verticillata and significant left ventricular hypertrophy, without renal involvement. His sister had more extensive features with skin, ophthalmological, renal and neurological evidence of disease and marked left ventricular hypertrophy [15]. This series of clinical reports illustrates the broad phenotypic variability expressed in both male and females with the GLA c.901C>T variant. There is no evidence to indicate that this variant results in a predominantly or exclusively cardiac phenotype as has been shown for some GLA variants. The predominant cardiac presentation in the proband is more similar to the females reported to be symptomatic heterozygotes for this variant [15] and parallels the cellular mosaicism present in him that is present in heterozygote females.
Somatic mosaicism for a known pathogenic loss of function GLA variant was reported previously in a 58 year old male who presented with features consistent with hypertrophic cardiomyopathy, proteinuria and mild renal impairment [20]. The similarity in the presentation and age of onset in this individual highlights that somatic mosaicism for pathogenic GLA variants may preferentially present with hypertrophic cardiomyopathy. In this mosaic individual, the alpha-galactosidase level in blood was below the normal range at 0.7 mmol/L/h (2.0–11.7) [20].
The diagnosis of Fabry disease in the proband excludes any increased risk for his son and the need for clinical or genetic testing in him. It is important to note that if he had a daughter she would have been at increased—but not at obligate—risk of inheriting the variant allele as he is mosaic for this. The absence of a family history of Fabry disease is consistent with the identification of mosaicism, a de novo post zygotic event, in the proband. We excluded the proband being a chimera (a single organism composed of two or more different populations of genetically distinct cells that originated in different zygotes) compared to being a mosaic (a mixture of two cell lines in one organism originating in one zygote), as there was no evidence of biallelic variants of LAMP2 and FHL1, the other X-linked genes on the gene panel.
We considered the possibility of revertant mosaicism, i.e., that the proband inherited the pathogenic variant from his mother, but that the variant allele was replaced by the wild type allele in a proportion of cells following fertilization [21]. To date, revertant mosaicism has not been reported in Fabry disease. Despite no history of heart problems or clinical features consistent with Fabry disease in the mother, we undertook genetic testing in one of the proband’s female siblings (II-2), which was a wild type for the variant. An alternative explanation for the identification of two GLA alleles in a male resulting in a milder clinical phenotype would be sex chromosome aneuploidy, but this was excluded by QF-PCR.
Generally, the preferred approach for diagnosis of Fabry disease in males if there is no previous family history, is enzyme and biomarker analysis followed by DNA sequencing of GLA if high clinical suspicion remains. However, if there is a known familial genotype, then a DNA analysis of GLA is recommended as the first line test. Enzyme level analysis is not the preferred approach to diagnose Fabry disease in females, as the levels can often be normal despite obligate affected status. This may be due to variable X-inactivation in some tissues. Our proband exhibits a phenotype more in keeping with a heterozygote female where single organ disease is more common, compared to male hemizygotes who exhibit younger age of symptom onset and a broader spectrum of organ system involvement [2,8].
We recommend that males with cardiomyopathy, especially with imaging changes characteristic of Fabry disease, should not have the diagnosis excluded entirely on the basis of a normal enzyme assay, but should consider more detailed biochemical testing, including lyso-Gb3 or genetic testing to determine if mosaicism is present. Such diagnoses will have a profound impact for the affected individuals and their family members.

The study was conducted according to the guidelines of the Declaration of Helsinki, and approved by the South Manchester Ethics Committee (11/H10003/3, approved 2011).

The data presented in this study are available on request from the corresponding author. The data are not publicly available due to ethical restrictions.

We thank the patient for his agreement to participate. W.G.N. is supported by the Manchester NIHR BRC (IS-BRC-1215-20007). 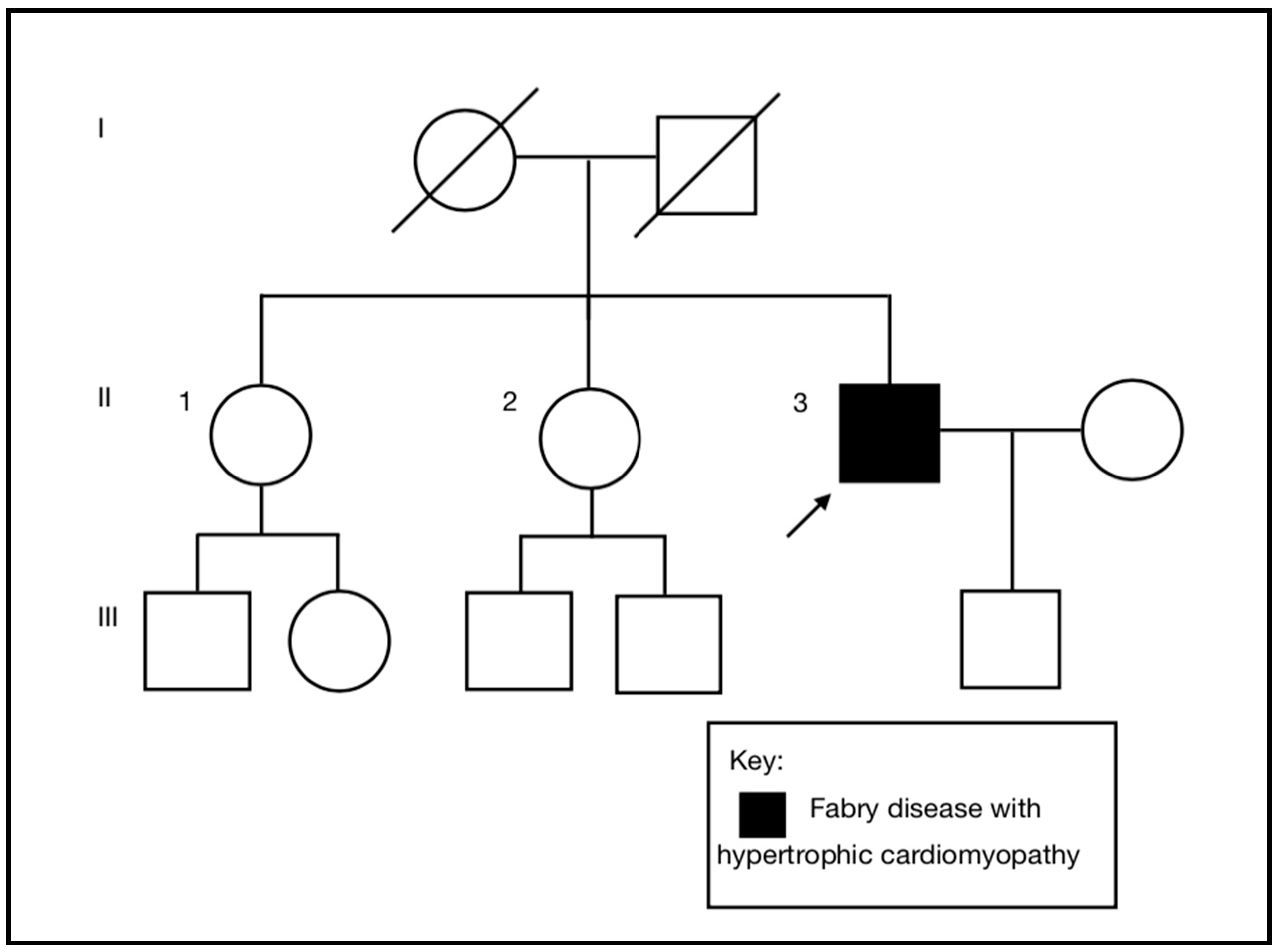 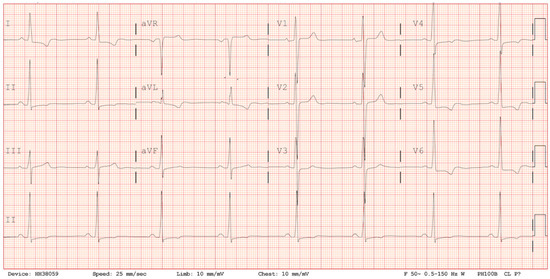 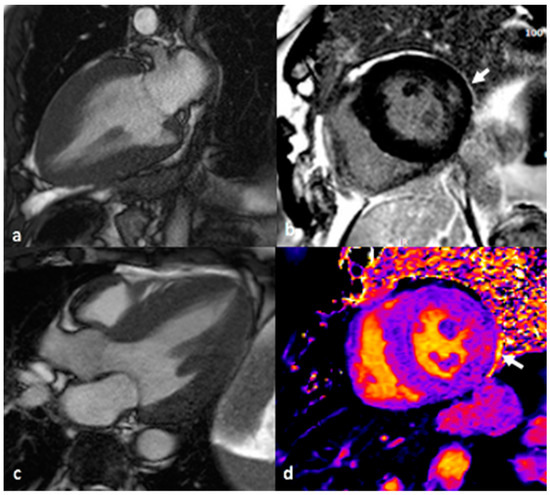 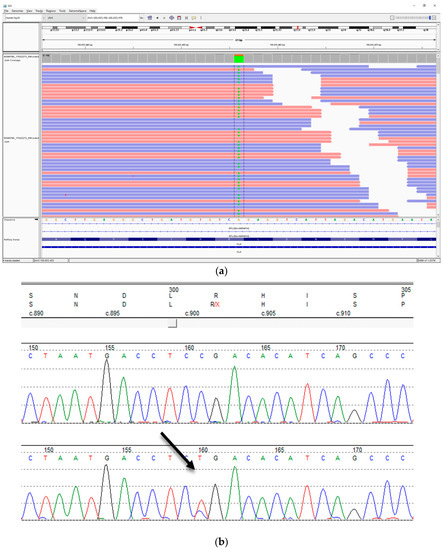