Instagram and WhatsApp in Health and Healthcare: An Overview
Previous Article in Special Issue

In a relatively short period of time, the Internet has become a critical information delivery infrastructure for global commerce and multimedia [1]. Over the last decade, multicast routing trees for efficient one-to-many communications applications (e.g., web broadcasting, video teleconferencing, Voice over Internet Protocol (VOIP), and High Definition Television (HDTV) have emerged on the Internet in WMNs [2]. Considering different quality-of-service (QoS) provisioning, one of the solutions is the minimal-cost multicast routing. This presents the problem of finding a tree in a graph from the source to a subset of vertices called terminals such that the total edge cost is minimal. Nevertheless, these days, more and more practical problems, including Very Large Scale Integration (VLSI) layout, network design, etc., can be modeled as multicast routing tree subject to multiple QoS constraints.
The challenge of multicast routing subject to multiple QoS constraints is usually known as the multiply constrained multicast routing (MCMR) problem. To the best of our knowledge, finding the minimal-cost multicast routing tree (or a Steiner tree) is Non-Deterministic Polynomial (NP)-hard [3]. In that way, it is also NP-hard to find the minimal-cost multicast routing tree subject to multiple QoS constrains. On one hand, there has been much work involved in deterministic algorithms [4], such as the genetic algorithm and the ant colony algorithm, which could finally find optimal solutions for this problem, while the time complexity grows exponentially with the increase of network nodes. On the other hand, there also has been much work involved in designing heuristic solutions for this problem [5,6,7,8,9,10,11,12,13], and they can find multicast trees close to the optimal multicast tree in feasible time, which is more suitable for network multicast use, due to the computing and processing performance of network nodes.
Recently, it seems that much work has been turned to focus on approximation algorithms to deal with the multiply constrained multicast routing (MCMR) problem. The authors did research on the Steiner tree problem at the earliest, then put forward the MPH algorithm to deal with it [14]. Based on Yuan’s study [15], Xue et al. proposed various polynomial time algorithms for the multiply constrained optimal paths (MCOP) problem [16,17]. Feng and Korkmaz introduced a novel idea to show how a heuristic method can be used to boost the average performance of an approximation algorithm [18]. Szymanski presented a Constrained Multicast-Max-Flow-Min-Cost algorithm to maximize the throughput of a multicast tree using network coding, subjected to routing cost constraints [19]. At the same time, the authors did research on the optimal constrained path routing in WMNs in the previous paper [20]; following that, the Fast Minimum Path Cost Heuristic (FMPH) algorithm was put forward to deal with the MCMR problem in WMNs. Recently, Athanasios Vasilakos and his co-authors proposed the cross-layer protocol to decrease the delay [21,22,23,24,25] and devised a novel energy-saving algorithm. Alasaad and his co-authors argued for a ring-based multicast routing topology with support from infrastructure nodes for group communications in WMNs [26], and then developed heuristic algorithms to deal with it. Other excellent research on QoS multicast in wireless networks could be found in this literature [27,28,29,30,31,32,33,34,35].
Rather than the previous research model, in this paper, multiply constrained optimal multicast routing (MCOMR) is investigated from the perspective of approximation. As far as we know, Xue’s algorithm is currently the fastest for path establishment in unicast routing with multiple QoS constraints [16], and the MPH algorithm is efficient for multicast routing [14]. However, the solution to the MCOMR problem is rarely found or is found to be inefficient in the existing literature. In this study, a novel approximation algorithm is proposed to achieve a more excellent solution. The main contributions made in this paper are summarized as follows:
The rest of this paper is organized as follows: Section 2 formally formulates the problem to be studied, along with notations, and describes the previous algorithms that will be used in later sections. Section 3 presents the approximation algorithm for the optimal multicast routing with multiple QoS constraints and its theoretical analysis. Simulations obtained from special network are reported to verify the algorithm in Section 4. Finally, Section 5 summarizes this paper.

Xue et al. provided an important methodology for finding the approximate optimal path for constrained unicast routing by constructing an auxiliary graph [16]. It transforms an undirected graph G to a directed graph . Each vertex is associated with vertices, since each weight has been normalized . Then, ( is the approximation factor) could be regarded as the maximum integer of all constraints in . For example, from the source node s to any node u, is used for recording the ith weight of path length, and for all the K weight of path length. To each undirected edge in G, the directed edge in is constructed from to , where , . It is clear that the infeasible paths of the latter K − 1 metrics have been filtered. Therefore, an optimal path in G corresponds to an optimal path from to in .
The basic idea behind Xue’s algorithm is to replace time with space. As far as we know, Xue’s approximation scheme with the time complexity of is currently the fastest way to calculate a path with multiple QoS constraints. As can be observed from the examples, using Xue’s deterministic algorithm with an auxiliary graph, it is feasible and meaningful to seek an effective and efficient algorithm to approximate optimal multicast routing with multiple constraints.

In 1980, Takahashi and Matsuyama put forward the MPH algorithm to help solve the Steiner tree problem [14]. The following are its steps:
Step 1: Choose any node d1 from the set D of multicast destination nodes, let , and initialize the generation of tree , ;
Step 2: The cost from in to can reach the minimum value by comparing formula (1):
By connecting to through the shortest , the updated tree can get the result of ;
Step 3: Until , find the Steiner generating tree; otherwise, let , then repeat Step 2.

3.2. The Procedure of the NMHA Alogorithm

The detailed procedure of NMHA is presented as shown in Algorithm 1.

3.3. Analysis of the NMHA Algorithm

This paper discussed the problem of optimal constrained multicast routing in WMNs. A novel approximation algorithm for the MCOMR problem was proposed, based on the technique of auxiliary graph construction, scaling, rounding, and the MPH algorithm. The proposed algorithm can achieve lower complexity and obtain the approximation optimal multicast routing tree in feasible time. According to the experiments on the special static networks, the proposed NMHA algorithm is capable of finding the optimal (or minimum-cost) multiply constrained optimal multicast routing tree with the approximation factor of 2(1 + ε)(1 − 1/q) and the time complexity of O(qmn2τK−1).
As for future research work, we plan to study more excellent solutions and faster algorithms for the MCOMR problem according to the time-varying characteristics of wireless networks based on our current research. Investigation on comparisons of the NMHA with other algorithms is also interesting.

The work described in this paper is supported by the Science and Technology Program of Guangzhou (No. 201510010192), and the Public Welfare Fund and Ability Construction Project of Guangdong Province (No. 2016A010101040), China. 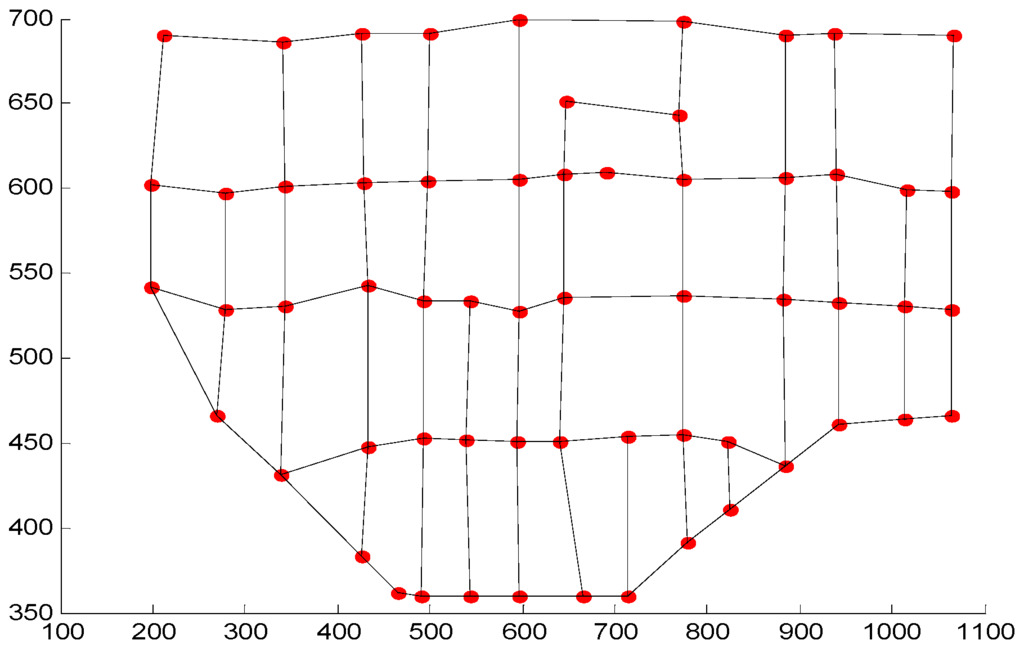 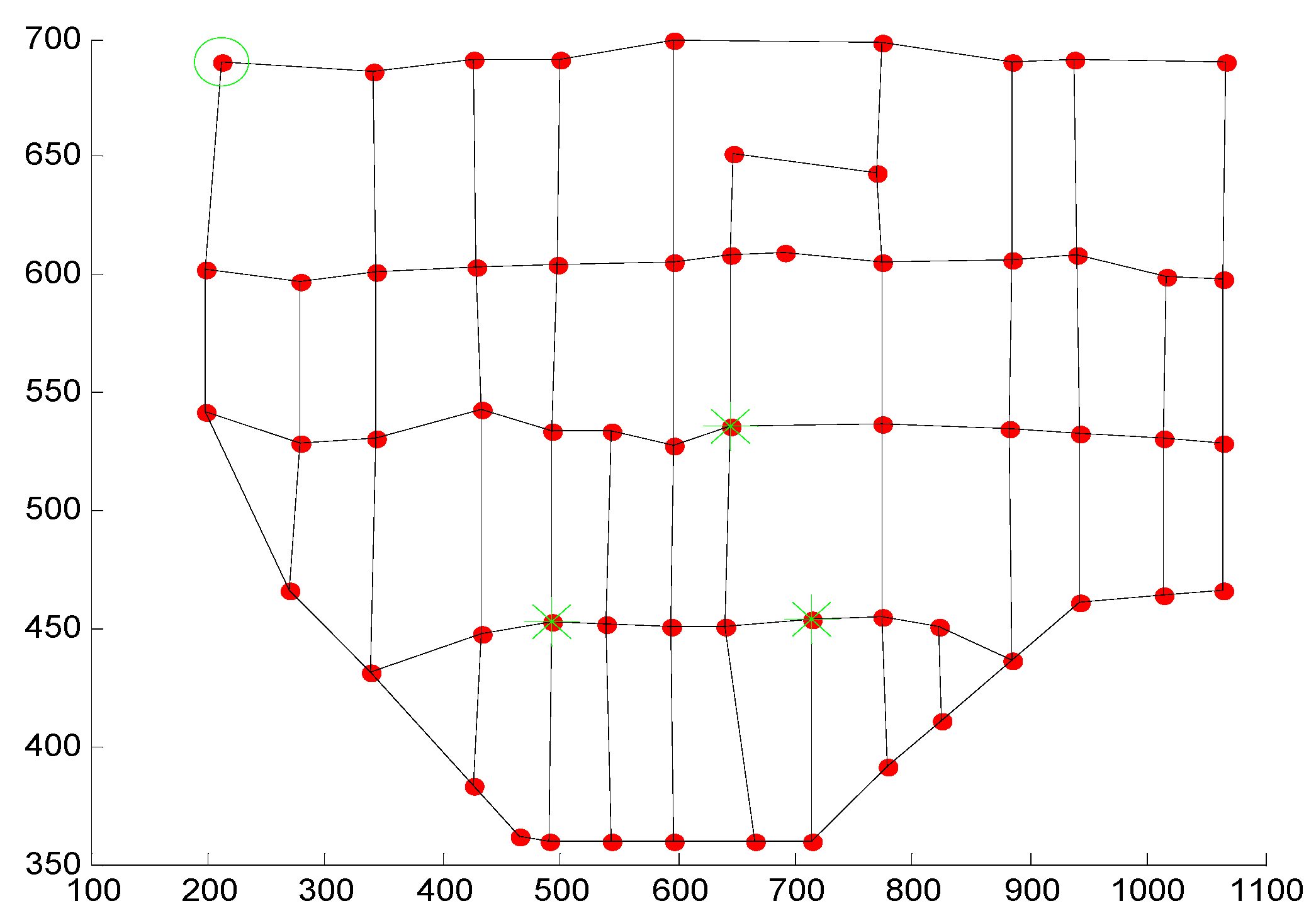 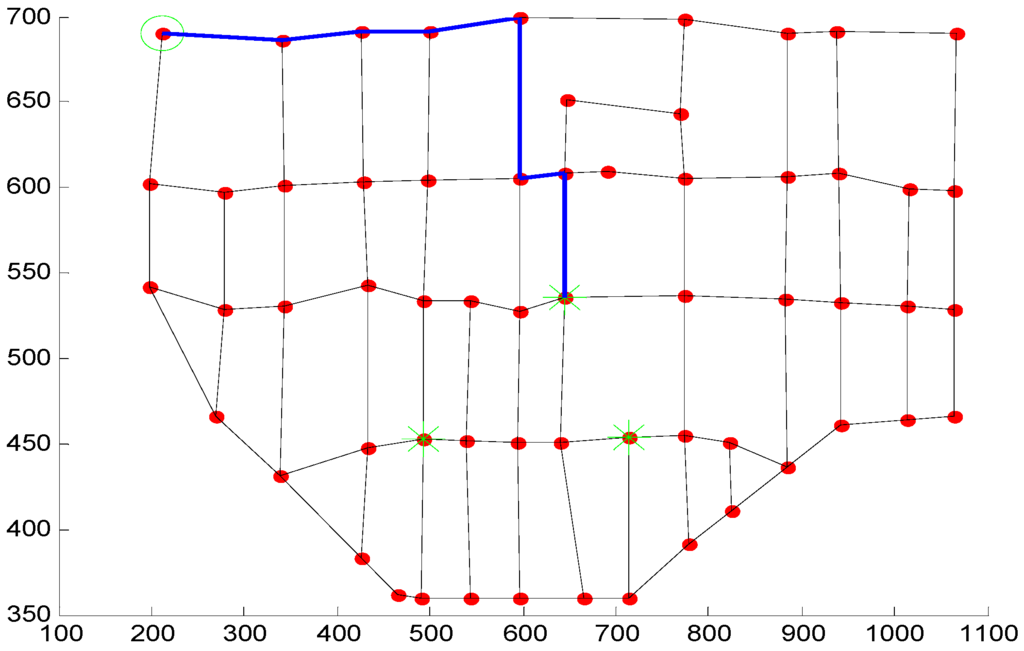 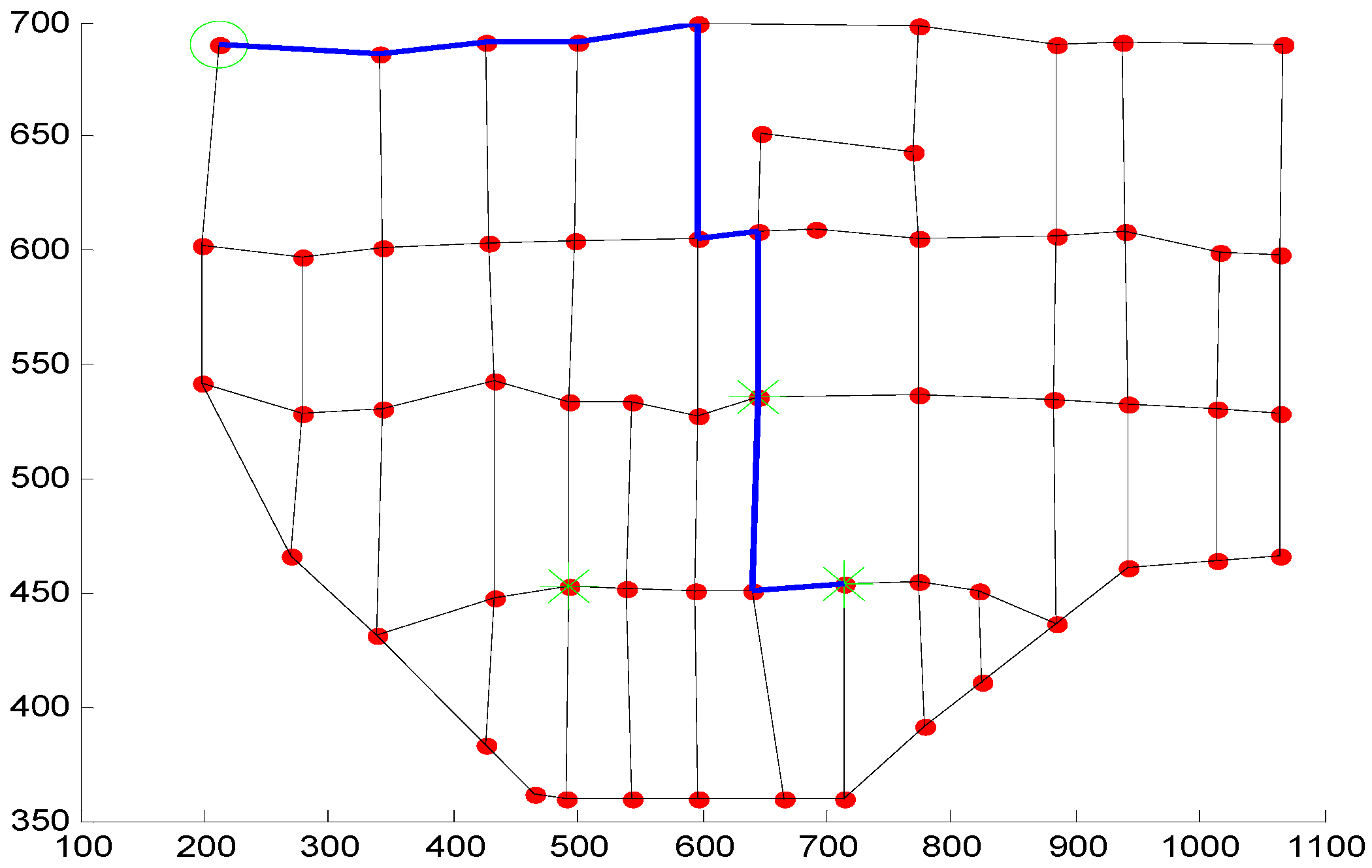 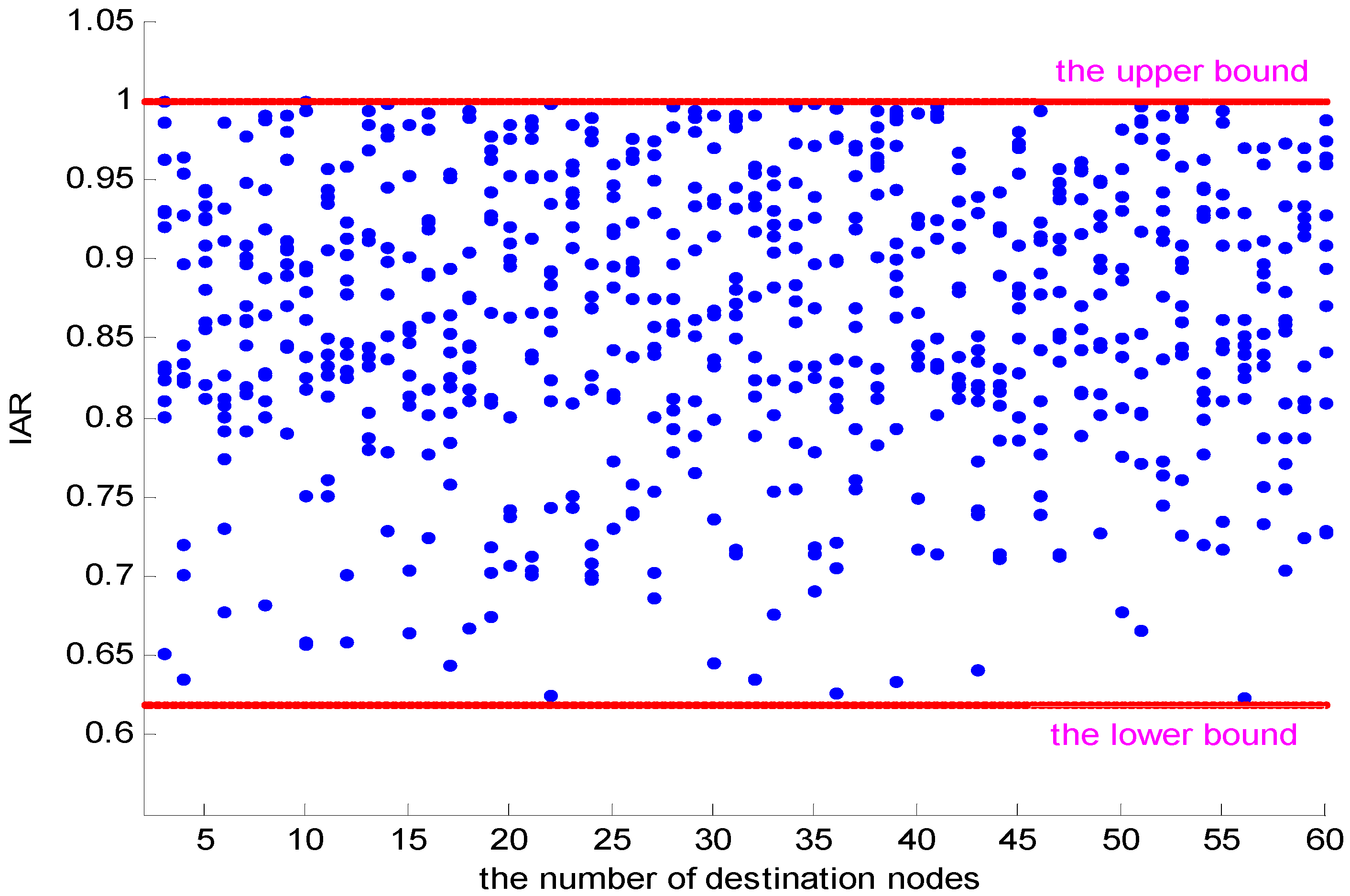 Table 2. A comparison of the performance of novel multicast heuristic approximation (NMHA) algorithm and Xue’s algorithm [16] in the random network.