Fairness and Trust in Virtual Environments: The Effects of Reputation

Reputation supports pro-social behaviors in a variety of social settings and across different ages. When re-encounters are possible, developing a positive reputation can be a valuable asset that will result in better outcomes. However, in real life, cooperative acts are ambiguous and happen in noisy environments in which individuals can have multiple goals, visibility is reduced, and reputation systems may differ. This study examined how reputation within a virtual environment affects fairness in material allocations and trust in information exchange, in a three-actors interaction game in which each player had an incentive to deceive the others. We compared the results of two experimental conditions, one in which informers could be evaluated, and one without reputational opportunities. A reputational system appeared to enhance both trust and fairness even within a virtual environment under anonymous condition. We tested adolescents and adults finding that they were consistently more generous when visibility was increased, but they showed significantly different patterns in resources allocation and information exchange. Male and female participants, across ages, showed other interesting differences. These findings suggest that reputational effects increase fairness and trust even in a noisy, ambiguous and uncertain environment, but this effect is modulated by age and gender. View Full-Text
Keywords: reputation; fairness; trust; virtual environment; social cognition reputation; fairness; trust; virtual environment; social cognition
►▼ Show Figures 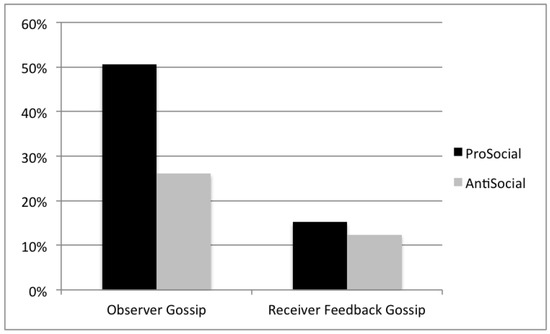