:
Successful cell targeting depends on the controlled positioning of cell-type-specific antibodies on the nanocarrier’s (NC) surface. Uncontrolled antibody immobilization results in unintended cell uptake due to Fc-mediated cell interaction. Consequently, precise immobilization of the Fc region towards the nanocarrier surface is needed with the Fab regions staying freely accessible for antigen binding. Moreover, the antibody needs to be a certain distance from the nanocarrier surface, influencing the targeting performance after formation of the biomolecular corona. This can be achieved by using PEG linker molecules. Here we demonstrate cell type-specific targeting for dendritic cells (DC) as cellular key regulators of immune responses. However, to date, dendritic cell targeting experiments using different linker lengths still need to be conducted. Consequently, we focused on the surface modification of nanocarriers with different molecular weight PEG linkers (0.65, 2, and 5 kDa), and their ability to reduce undesired cell uptake, while achieving efficient DC targeting via covalently immobilized antibodies (stealth targeting). Our findings demonstrate that the PEG linker length significantly affects active dendritic cell targeting from cell lines (DC2.4) to primary cells (BMDCs, splenocytic conventional DCs type 1 (cDC1)). While antibody-functionalized nanocarriers with a shorter PEG length (0.65 kDa) showed the best targeting in DC2.4, a longer PEG length (5 kDa) was required to specifically accumulate in BMDCs and splenocytic cDC1. Our study highlights that these crucial aspects must be considered when targeting dendritic cell subsets, which are of great importance in the fields of cancer immunotherapy and vaccine development.
Keywords:
antibody functionalization; nanoparticles; nanovaccine; dendritic cell targeting; PEG

The main goal of smart drug delivery is the targeted nanocarrier transport of drugs, or immunomodulatory molecules, to the organ or cell type of interest without clearance or accumulation in other compartments [1]. Controlling nanocarrier-based delivery is key to the reduction in systemic side effects and to the improvement of pharmacological profiles [2]. Despite many years of research, tumor-targeting nanocarrier systems only achieve tumor accumulation rates with a median of 0.7% of the injected dose at the targeted site [3]. Consequently, nanocarriers applied as nanomedicines have generally failed in clinical trials, with only a few exceptions. All of these nanomedicines have no targeting moiety incorporated into the nanocarrier. These nanocarriers include albumin-stabilized paclitaxel nanoparticles (ABRAXANE®), or liposomal formulations of either doxorubicin (DOXIL®) or irinotecan (ONIVYDE®) [4,5,6]. Nevertheless, nanocarriers inherit a great potential in revolutionizing targeted therapies, as demonstrated just recently by the use of lipid nanoparticle-based COVID-19 mRNA vaccines [7].
Numerous factors influence successful clinical translation into the medical market and must be overcome to learn from and recognize previously failed nanocarrier systems [5,6]. In this field, the nano-bio interface represents a great challenge [6]. In particular, we are talking about the role of the biomolecular corona and its influence, antibody-based nanocarrier targeting [8], and drug release [9]. In addition, many nanocarrier systems are rapidly cleared by the mononuclear phagocyte system (MPS), or the complement system [10,11,12]. In this process, pristine nanocarriers are usually marked and identified by opsonins, such as complement proteins or immunoglobulins, which can bind to opsonin receptors expressed on macrophages leading to nanocarrier phagocytosis [13]. Consequently, the immune system plays a critical role in the recognition and elimination of nanocarriers [14].
Therefore, nanocarriers have been coated with an additional stealth layer that disguises the nanocarriers and prevents their recognition by opsonins, thus reducing phagocytic removal. Among the stealth polymers, poly-(ethylene glycol) (PEG) is the gold standard or benchmark for surface modification of nanocarriers resulting in reduced clearance by the MPS and complementary system [15]. PEG has been shown to increase the hydrodynamic size and water solubility of nanocarrier systems, thereby decreasing their self-aggregation and interaction with blood components of the MPS by means of steric repulsion [16,17]. The use of PEGylated nanocarrier systems are rapidly increasing in the field of nanomedicine, and have now reached clinical trials, or have been licensed by pharmaceutical regulatory authorities [18]. Among the PEGylated drugs or nanocarrier systems, attached PEGs differ in their molecular weight ranging from 2 to 60 kDa [17]. However, these non-targeted nanocarriers demonstrate an improved pharmacokinetic profile compared to the administration of a free payload [19]. However, as mentioned above, the average accumulation at the target site is low in the case of tumor therapy [3].
Consequently, improving selective accumulation of the nanocarrier system requires active targeting ligands, such as surface decoration with antibody molecules. In the field of cancer vaccines and immunotherapy, a nanocarrier-based targeted delivery of tumor-associated antigens and immunomodulators (adjuvants) to dendritic cells (DCs) bears great potential since dendritic cells are professional antigen-presenting cells capable of generating robust antigen-specific anti-tumor immune responses [20]. However, due to the poor success of DC-based anti-tumor vaccines in clinical trials, an efficient targeting of specific DC subsets is considered to be the prerequisite for inducing strong anti-tumor responses [21]. In particular, conventional DCs type 1 (cDC1) inherit the potential to efficiently cross-present exogenous antigens enabling them to induce strong cytotoxic T cell responses against tumor cells [22]. Therefore, delivering cargo to cDC1 via nanocarriers functionalized with antibodies, such as anti-CLEC9A [23] and other targets, is a feasible approach. However, there are several limitations evidenced by the small number of antibody-functionalized nanocarrier formulations currently undergoing clinical trials [24]. Most commonly, in the antibody surface-decoration of nanocarriers a PEG linker is applied to locate the antibody molecule at a certain distance from the nanocarrier surface. Hence, the PEG length can influence the interactions of the attached targeting ligand and the cell receptor of interest [25,26].
As investigated by Cruz et al., a PEG linker length comparison on antigen-loaded and antibody-coated PLGA nanoparticles highlighted the finding that short PEG constructs (2–3 kDa) result in stronger interactions with DCs, inducing higher T cell proliferation when compared to longer PEG constructs (6–20 kDa) [27]. In contrast, Kapadia et al. demonstrated a higher particle uptake and antigen presentation of peptide-decorated hydrogels when using a 5 kDa PEG linker compared to 2 and 10 kDa [28]. Given this complexity, we focused on investigating previously developed antibody-nanocarrier conjugates, precisely targeting DCs both in vitro [29] and in vivo [23], with respect to the influence of the applied PEG linker length (0.65, 2 and 5 kDa PEG). Our investigation focused particularly on the targeting of the CD11c receptor on DCs in immortalized (DC2.4), or primary DCs (BMDCs, splenocytic cDC1s, and the impact of the biomolecular corona. This study delineates the differences in DC targeting between the three PEG linker constructs from cell lines to primary cells, highlighting a greater antibody distance from the nanocarrier surface necessary for targeting DC subsets. In particular we have shown that the ability of nanocarriers to target cDC1 in primary cells required a 5 kDa PEG construct. Furthermore, our biomolecular corona analyses highlight the importance of the nanocarrier–antibody composition.

In this study, we have furthered our research on our previously established antibody–nanocarrier conjugation strategy by comparing different molecular weight PEG linkers for the spacing between the antibody and the nanocarrier surface. This spacing determines the flexibility of the attached antibody and directly influences the targeting ability of the nanocarrier. Accordingly, our findings systematically highlight the differences between a DC cell line and primary DC subsets regarding the influence of PEG linker lengths upon the antibody-based targeting ability of nanocarriers. In particular, CD11c-based DC2.4 targeting proved to be most efficient when using the shortest linker (0.65 kDa PEG), whereas a distinct subset-specific cDC1 targeting in primary cells requires a longer linker (5 kDa PEG). This discrepancy probably explains the misinterpretation of in vitro data generated using DC cell lines, and subsequently leading to unexpected in vivo findings. Given this, our study demonstrates that a successful targeting strategy, especially for DC-based subset targeting, requires coordinated interplay of the nanocarrier, the targeting ligand, and the spacer molecule. These findings pave the way to further optimize efficient and specific targeting of dendritic cells in vivo using antibody- or nanobody-functionalized nanocarriers for the use in cancer immunotherapy.

This research was funded by the German Research Foundation (DFG) within the framework of the Sonderforschungsbereich 1066 (SFB 1066).

Wild type C57BL/6J mice were kept in the animal facility of the Translational Animal Research Center at the University Medical Center of the Johannes Gutenberg University Mainz under pathogen-free conditions on a standard diet. All procedures were approved by the regional animal care committee (Landesuntersuchungsamt Rheinland-Pfalz) and performed according to the EU Directive 2010/63/EU.

For the preparation of the graphical abstract Biorender.com was used.

The authors declare that there is no conflict of interests. 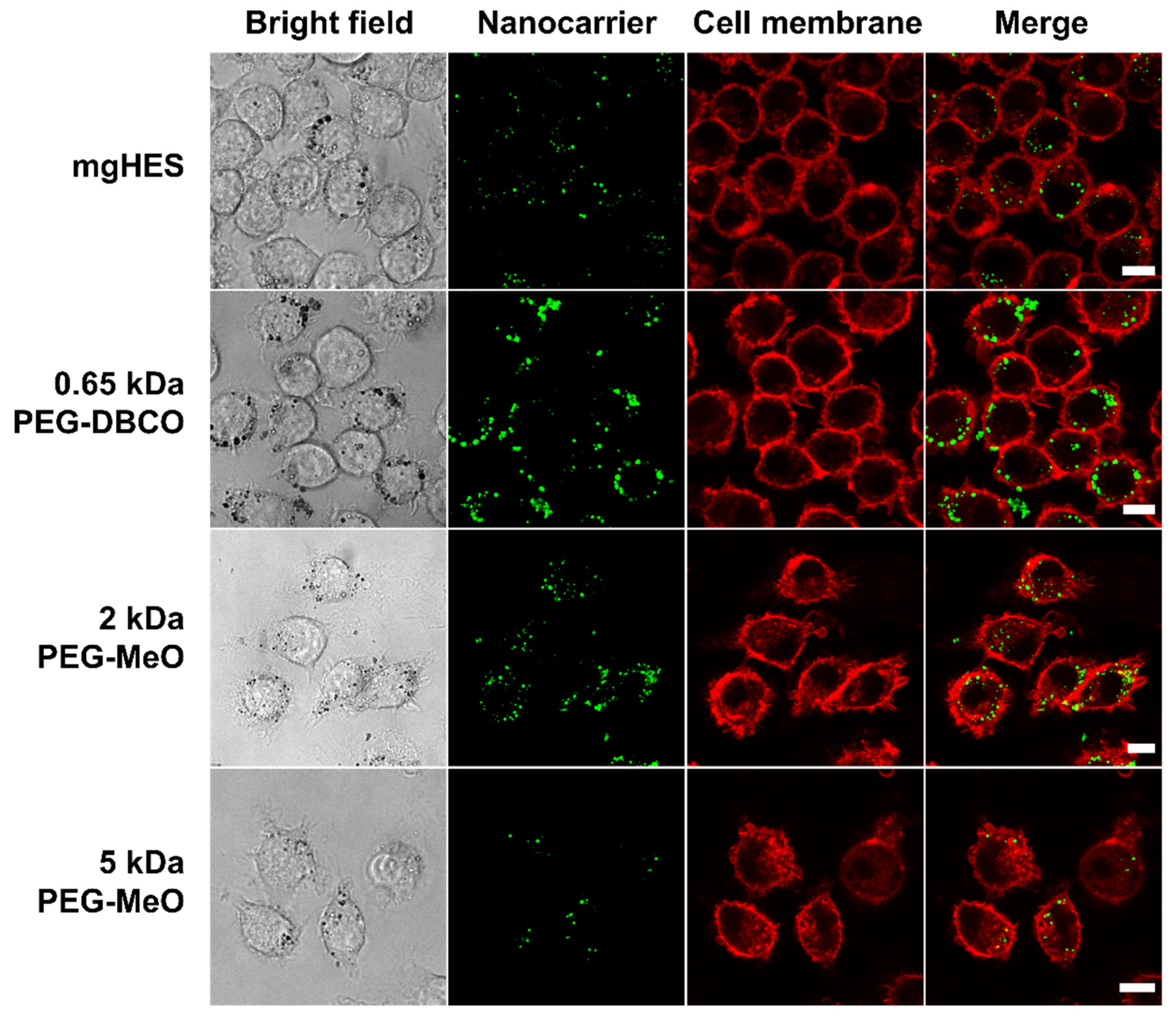