Gemcitabine-Loaded Nanocarrier of Essential Oil from Pulicaria crispa: Preparation, Optimization, and In Vitro Evaluation of Anticancer Activity
Next Article in Special Issue

:
Single domain shark antibodies that bind to the transferrin receptor 1 (TfR1) on brain endothelial cells have been used to shuttle antibodies and other cargos across the blood brain barrier (BBB) to the brain. For these studies the TXB4 brain shuttle was fused to a TrkB neurotrophin receptor agonist antibody. The TXB4-TrkB fusion retained potent agonist activity at its cognate receptor and after systemic administration showed a 12-fold increase in brain levels over the unmodified antibody. Only the TXB4-TrkB antibody fusion was detected within the brain and localized to TrkB positive cells in the cortex and tyrosine hydroxylase (TH) positive dopaminergic neurons in the substantia nigra pars compacta (SNc), where it was associated with activated ERK1/2 signaling. When tested in the 6-hydroxydopamine (6-OHDA) mouse model of Parkinson’s disease (PD), TXB4-TrkB, but not the unmodified antibody, completely prevented the 6-OHDA induced death of TH positive neurons in the SNc. In conclusion, the fusion of the TXB4 brain shuttle allows a TrkB agonist antibody to reach neuroprotective concentrations in the brain parenchyma following systemic administration.
Keywords:
TrkB; agonist antibody; variable new antigen receptor (VNAR); neuroprotection; transferrin receptor 1 (TfR1); blood-brain barrier (BBB); 6-OHDA; Parkinson’s disease

The interaction of neurotrophins (NGF, BDNF, NT3 and NT4) with their cognate Trk receptors (TrkA, TrkB and TrkC, respectively) protects neurons from naturally occurring cell death during development [1,2]. Their ability to nurture developing neurons spawned numerous studies to determine if they can promote the survival of adult neurons, particularly in the context of neurodegenerative disease or acute brain injury [3,4]. In this context, promising results have been found with BDNF which, by activating the TrkB receptor, can protect neurons from death in, for example, preclinical models of PD [5], Alzheimer’s disease (AD) [6,7], and ischemic lesions [8,9,10,11]. In addition, BDNF can promote functional recovery of injured neurons following spinal cord injury [12,13,14] and stimulate the production of new neurons in the adult brain [15,16]. The loss of BDNF has also been suggested as a contributory factor to the progression of PD [17,18,19], AD [20] and Huntington’s disease [21,22,23], as well as to conditions such as depression [24,25].
However, the therapeutic potential of BDNF in neurodegenerative diseases, acute brain injury and other neurological conditions has not been realized in the clinical setting due in part to a short plasma half-life in vivo [26], exclusion from the brain parenchyma following systemic administration, and poor diffusion throughout the parenchyma due to a high isoelectric point [27]. Agonist antibodies that directly bind the TrkB receptor and mimic the neurotrophic activity of BDNF provides a long in vivo half-life, but the challenge of poor blood brain barrier (BBB) penetration remains. This has generally limited the systemic delivery of TrkB antibody to peripheral disorders such as obesity [28,29] and peripheral neuropathy [30]. Nonetheless, when delivered directly across the BBB by intracerebroventricular injection prior to an ischemic injury, the 29D7 TrkB agonist antibody enhances neuronal survival and promotes functional recovery [31,32,33,34].
There is considerable interest in the possibility of utilizing the receptor-mediated transcytosis pathways that exist on brain endothelial cells that form the BBB to carry biotherapeutics from the blood to the brain parenchyma with the transferrin receptor 1 (TfR1) being the most widely studied [35]. TXB4 is a single domain shark variable new antigen receptor (VNAR) antibody specific to TfR1 with enhanced brain penetration which was derived from the previously reported TXB2 VNAR [36] by restricted randomization of the CDR3 domain [37]. We hypothesized that if the TXB4 module was fused to the 29D7 TrkB agonist antibody it would accumulate in the brain following systemic administration to provide neuroprotection following disease or injury. In the present study we produced a bivalent, bispecific TrkB antibody by cloning the variable regions of the 29D7 agonist antibody into human IgG1 and genetically fusing it to the TXB4 brain shuttle.
Our results show that, unlike the unmodified TrkB agonist antibody, the TXB4-TrkB fusion rapidly accumulated in the brain following a single IV injection. We also found that TXB4-TrkB associates with and activates ERK1/2 signaling in TrkB positive cells in the cortex and tyrosine hydroxylase (TH) positive dopaminergic neurons in the substantia nigra compacta (SNc). When tested in the mouse 6-OHDA model of PD, the TXB4-TrkB antibody completely prevented the loss of TH positive neurons throughout the SNc. In conclusion, fusion with the TXB4 module allows the TrkB agonist antibody to reach neuroprotective concentrations in the brain parenchyma following systemic administration, generating a new class of biologic with therapeutic potential in a wide range of neurodegenerative diseases, acute brain injury situations and possibly depression.

In summary, this paper shows that the VNAR TXB4 shuttle targeting the TfR1 can be fused to an agonist antibody to allow for the efficient transport across the BBB and access to the brain parenchyma at physiologically relevant concentrations. The TXB4-TrkB fusion antibody crossed the BBB, accumulated in the brain, and triggered neurotrophin signaling in target cells susceptible to loss in AD (cortical neurons) and PD (dopaminergic neurons in the SNc). Furthermore, systemic treatment with TXB4-TrkB prevented the neuronal loss normally seen in a partial lesion mouse model of PD. As such, TXB4-TrkB can be considered as the first in a new generation of brain penetrant agonist antibodies with therapeutic potential in a wide range of neurodegenerative diseases, acute brain and spinal cord injury, and possibly depression.

P.D., F.S.W. and J.L.R. developed the hypothesis. P.S., E.H.S. and A.G. designed, produced, and analyzed the VNAR—TrkB constructs. E.C. and A.K.-R. performed animal experiment and analyzed data. P.D., E.J.R.F., S.D. and J.L.R. supervised research and assisted in data analysis. E.C. and P.D. co-wrote the first draft of the manuscript. All authors have read and agreed to the published version of the manuscript.

The study was conducted in accordance with UK Animals Scientific Procedures Act (1986) and were approved by King’s College London Animal Welfare and Ethical Review Body. 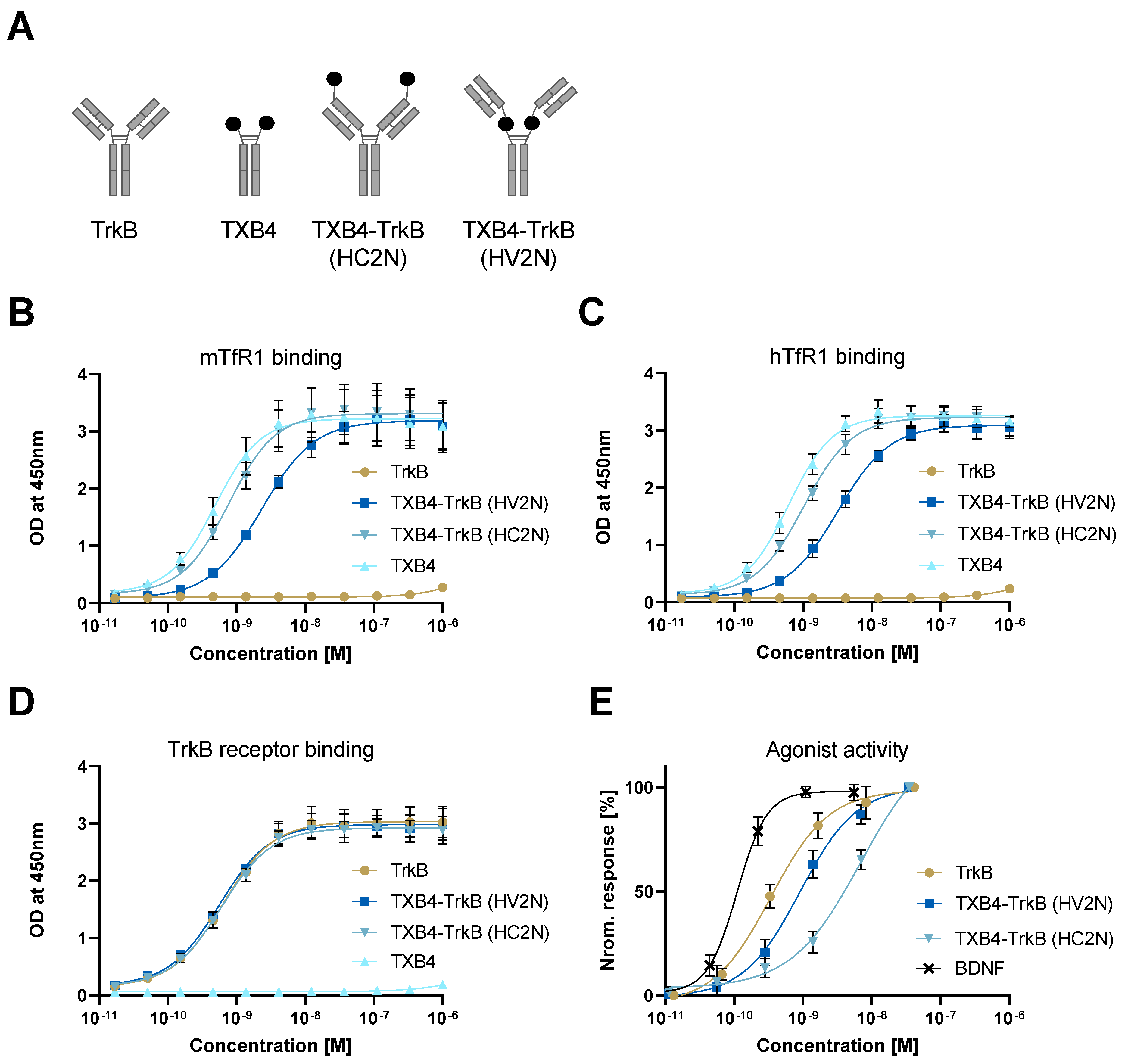 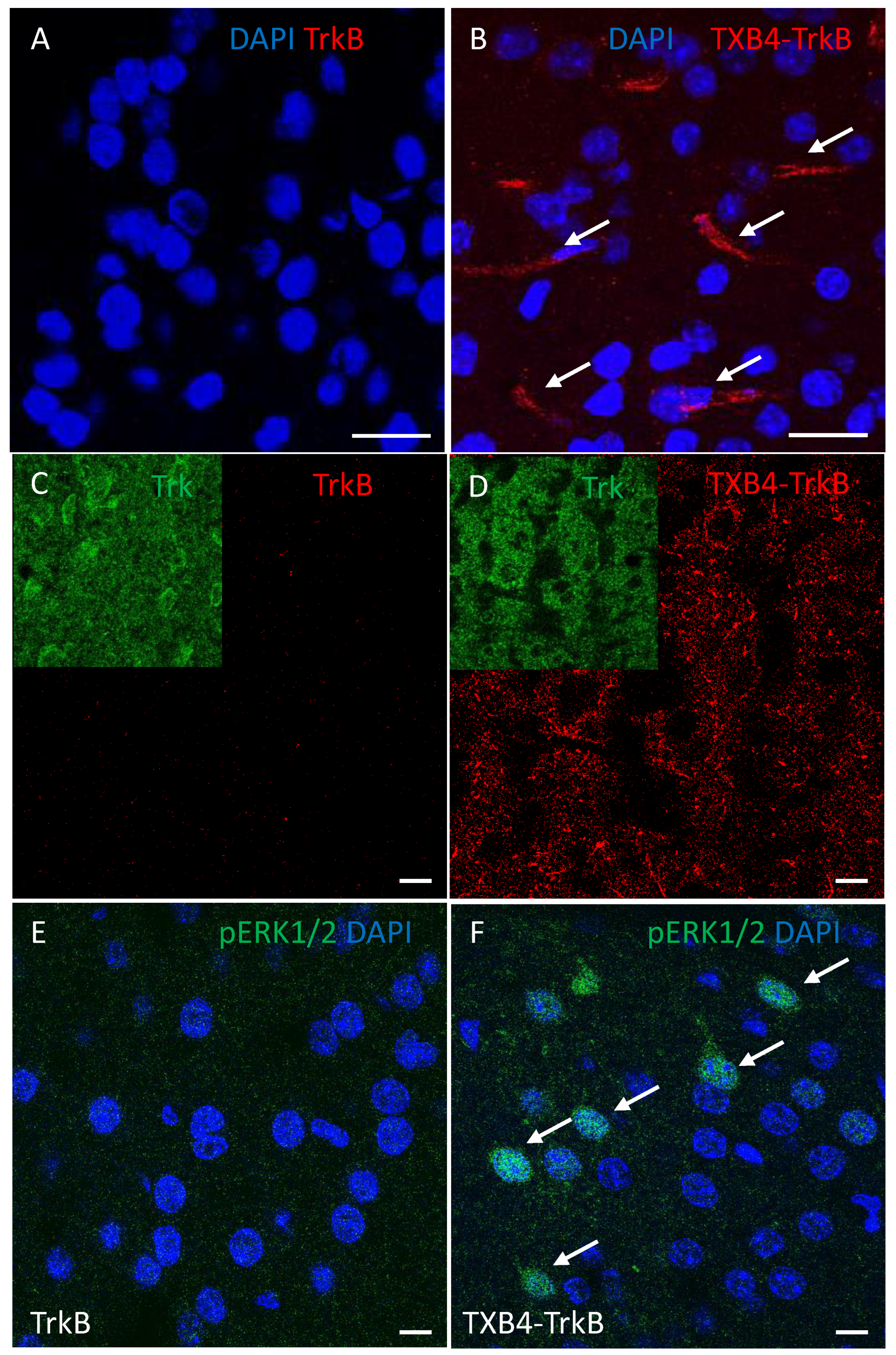 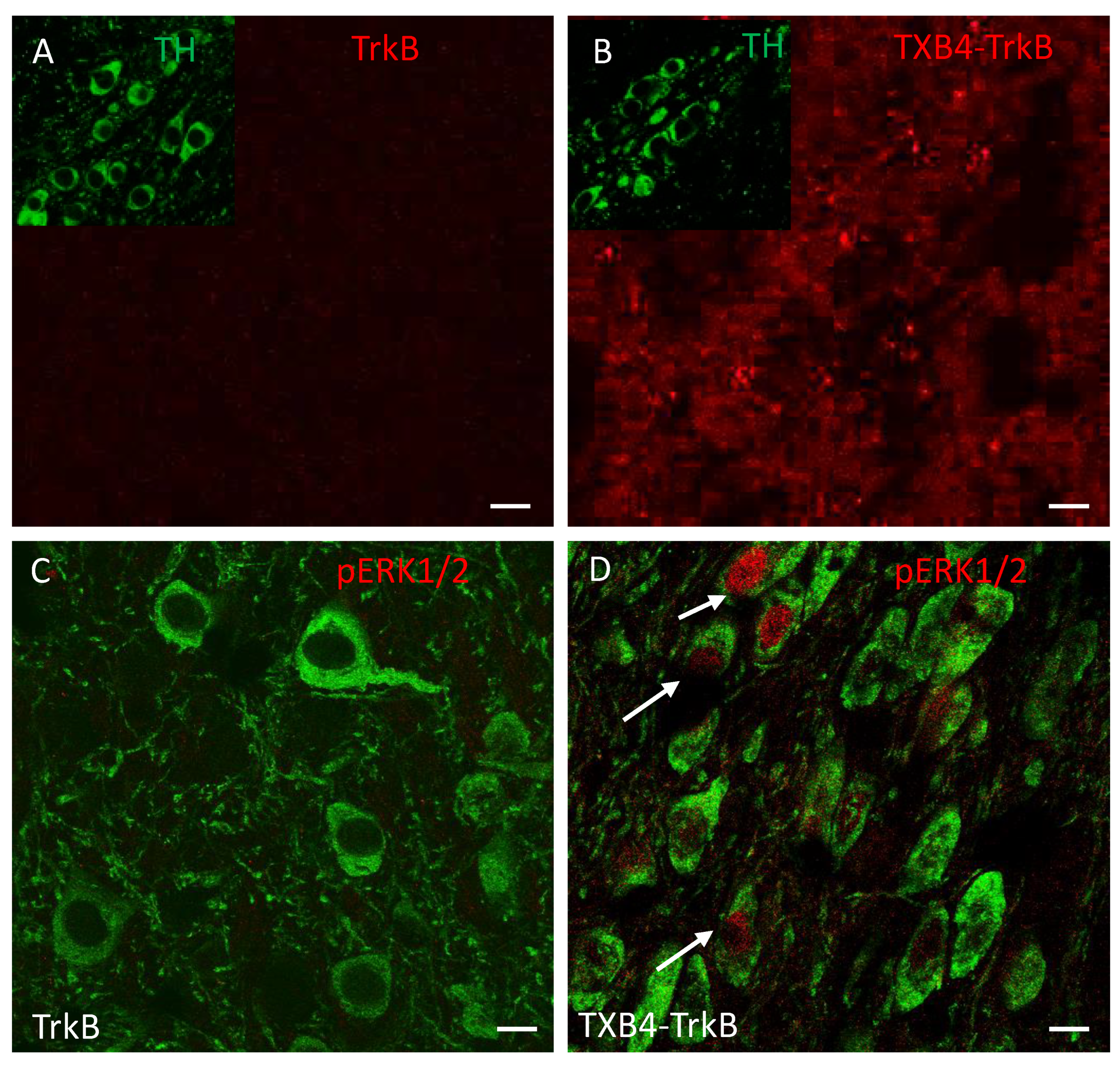