Gastric cancer (GC) is a major health concern worldwide, presenting a complex pathophysiology that has hindered many therapeutic efforts so far. In this context, purinergic signaling emerges as a promising pathway for intervention due to its known role in cancer cell proliferation and migration. In this work, we explored in more detail the role of purinergic signaling in GC with several experimental approaches. First, we measured extracellular ATP concentrations on GC-derived cell lines (AGS, MKN-45, and MKN-74), finding higher levels of extracellular ATP than those obtained for the non-tumoral gastric cell line GES-1. Next, we established the P2Y2 and P2X4 receptors (P2Y2R and P2X4R) expression profile on these cells and evaluated their role on cell proliferation and migration after applying overexpression and knockdown strategies. In general, a P2Y2R overexpression and P2X4R downregulation pattern were observed on GC cell lines, and when these patterns were modified, concomitant changes in cell viability were observed. These modifications on gene expression also modified transepithelial electrical resistance (TEER), showing that higher P2Y2R levels decreased TEER, and high P2X4R expression had the opposite effect, suggesting that P2Y2R and P2X4R activation could promote and suppress epithelial-mesenchymal transition (EMT), respectively. These effects were confirmed after treating AGS cells with UTP, a P2Y2R-agonist that modified the expression patterns towards mesenchymal markers. To further characterize the effects of P2Y2R activation on EMT, we used cDNA microarrays and observed that UTP induced important transcriptional changes on several cell processes like cell proliferation induction, apoptosis inhibition, cell differentiation induction, and cell adhesion reduction. These results suggest that purinergic signaling plays a complex role in GC pathophysiology, and changes in purinergic balance can trigger tumorigenesis in non-tumoral gastric cells. View Full-Text
Keywords: gastric cancer; purinergic receptors; cell migration; proliferation; TEER gastric cancer; purinergic receptors; cell migration; proliferation; TEER
►▼ Show Figures 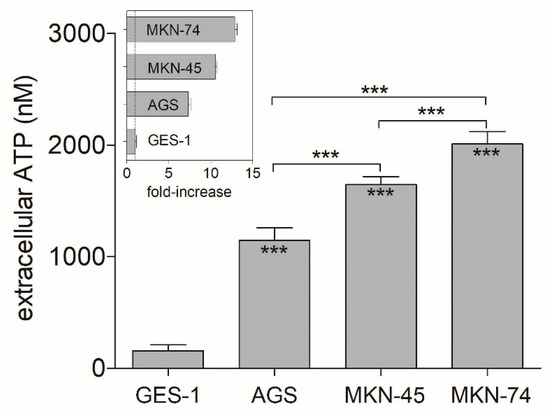