Preparation and Evaluation of Azelaic Acid Topical Microemulsion Formulation: In Vitro and In Vivo Study
Previous Article in Special Issue

A lack of effective intervention in addressing patient non-adherence and the acceptability of solid oral dosage forms combined with the clinical consequences of swallowing problems in an ageing world population highlight the need for developing methods to study the swallowability of tablets. Due to the absence of suitable techniques, this study developed various in vitro analytical tools to assess physical properties governing the swallowing process of tablets by mimicking static and dynamic stages of time-independent oral transitioning events. Non-anatomical models with oral mucosa-mimicking surfaces were developed to assess the swallowability of tablets; an SLA 3D printed in vitro oral apparatus derived the coefficient of sliding friction and a friction sledge for a modified tensometer measured the shear adhesion profile. Film coat hydration and in vitro wettability was evaluated using a high-speed recording camera that provided quantitative measurements of micro-thickness changes, simulating static in vivo tablet–mucosa oral processing stages with artificial saliva. In order to ascertain the discriminatory power and validate the multianalytical framework, a range of commonly available tablet coating solutions and new compositions developed in our lab were comparatively evaluated according to a quantitative swallowability index that describes the mathematical relationship between the critical physical forces governing swallowability. This study showed that the absence of a film coat significantly impeded the ease of tablet gliding properties and formed chalky residues caused by immediate tablet surface erosion. Novel gelatin- and λ-carrageenan-based film coats exhibited an enhanced lubricity, lesser resistance to tangential motion, and reduced stickiness than polyvinyl alcohol (PVA)–PEG graft copolymer, hydroxypropyl methylcellulose (HPMC), and PVA-coated tablets; however, Opadry® EZ possessed the lowest friction–adhesion profile at 1.53 a.u., with the lowest work of adhesion profile at 1.28 J/mm2. For the first time, the in vitro analytical framework in this study provides a fast, cost-effective, and repeatable swallowability ranking method to screen the in vitro swallowability of solid oral medicines in an effort to aid formulators and the pharmaceutical industry to develop easy-to-swallow formulations. View Full-Text
Keywords: film coating; solid oral dosage forms; in vitro swallowability; dysphagia; adherence; acceptability; swallowability index film coating; solid oral dosage forms; in vitro swallowability; dysphagia; adherence; acceptability; swallowability index
►▼ Show Figures 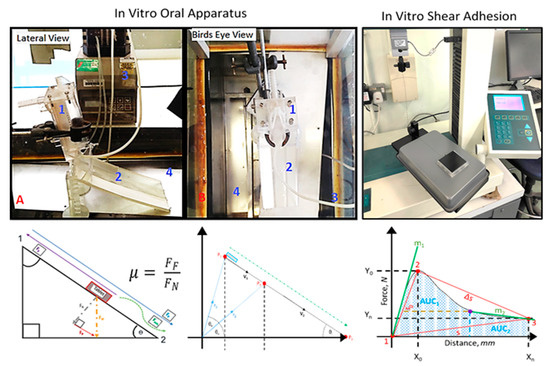