The membrane transport of many cationic prescription drugs depends on facilitated transport by organic cation transporters of which several members, including OCT2 (SLC22A2), are sensitive to inhibition by select tyrosine kinase inhibitors (TKIs). We hypothesized that TKIs may differentially interact with the renal transporter MATE1 (SLC47A1) and influence the elimination and toxicity of the MATE1 substrate oxaliplatin. Interactions with FDA-approved TKIs were evaluated in transfected HEK293 cells, and in vivo pharmacokinetic studies were performed in wild-type, MATE1-deficient, and OCT2/MATE1-deficient mice. Of 57 TKIs evaluated, 37 potently inhibited MATE1 function by >80% through a non-competitive, reversible, substrate-independent mechanism. The urinary excretion of oxaliplatin was reduced by about 2-fold in mice with a deficiency of MATE1 or both OCT2 and MATE1 (p < 0.05), without impacting markers of acute renal injury. In addition, genetic or pharmacological inhibition of MATE1 did not significantly alter plasma levels of oxaliplatin, suggesting that MATE1 inhibitors are unlikely to influence the safety or drug-drug interaction liability of oxaliplatin-based chemotherapy. View Full-Text
Keywords: MATE1; TKIs; knockout mice; renal elimination; drug-drug interactions MATE1; TKIs; knockout mice; renal elimination; drug-drug interactions
►▼ Show Figures 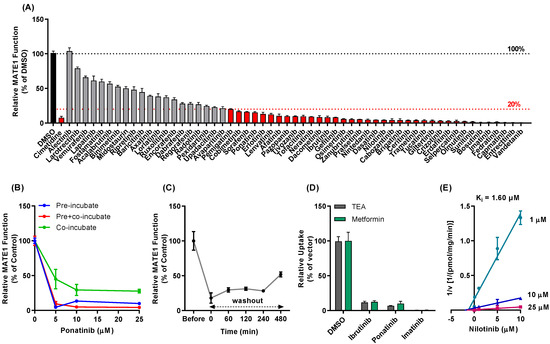 Alex Sparreboom
https://scholar.google.com/citations?user=Grn8FdIAAAAJ&hl=en
Zoom | Orient | As Lines | As Sticks | As Cartoon | As Surface | Previous Scene | Next Scene
We use cookies on our website to ensure you get the best experience. Read more about our cookies here.
Accept
We have just recently launched a new version of our website. Help us to further improve by taking part in this short 5 minute survey here. here.
Never show this again