Anticancer Activity of Half-Sandwich Ru, Rh and Ir Complexes with Chrysin Derived Ligands: Strong Effect of the Side Chain in the Ligand and Influence of the Metal

Antitumor Immune Response Triggered by Metal-Based Photosensitizers for Photodynamic Therapy: Where Are We?

:
Metal complexes based on transition metals have rich photochemical and photophysical properties that are derived from a variety of excited state electronic configurations triggered by visible and near-infrared light. These properties can be exploited to produce powerful energy and electron transfer processes that can lead to oxygen-(in)dependent photobiological activity. These principles are the basis of photodynamic therapy (PDT), which is a clinically approved treatment that offers a promising, effective, and noninvasive complementary treatment or even an alternative to treat several types of cancers. PDT is based on a reaction involving a photosensitizer (PS), light, and oxygen, which ultimately generates cytotoxic reactive oxygen species (ROS). However, skin photosensitivity, due to the accumulation of PSs in skin cells, has hampered, among other elements, its clinical development and application. Therefore, these is an increasing interest in the use of (metal-based) PSs that are more specific to tumor cells. This may increase efficacy and corollary decrease side-effects. To this end, metal-containing nanoparticles with photosensitizing properties have recently been developed. In addition, several studies have reported that the use of immunogenic/immunomodulatory metal-based nanoparticles increases the antitumor efficacy of immune-checkpoint inhibitor-based immunotherapy mediated by anti-PD-(L)1 or CTLA-4 antibodies. In this review, we discuss the main metal complexes used as PDT PSs. Lastly, we review the preclinical studies associated with metal-based PDT PSs and immunotherapies. This therapeutic association could stimulate PDT.
Keywords:
cancer; photodynamic therapy; transition metals; immunogenic cell death

The use of metal complexes as pharmaceutical drugs is widespread in medicine, especially for the management of patients with cancer. Cisplatin and its derivatives are employed in almost 50% of chemotherapeutic treatments against cancer to induce cytotoxic activity by generating DNA damages. Despite this broad use, platinum salts have limitations caused by the presence of inherent or induced resistance mechanisms, such as mutations in p53 [1]. However, metal-based compounds have a biological and chemical diversity distinct from that of organic drugs, which drives their attractiveness in the search for new therapeutics with new mechanisms of action for treating cancers [2]. They offer a wide range of oxidation states and variable geometries. The structural and electronic properties of transition metal complexes can be tailored by altering the identity of the metal and its oxidation state. The aim is to induce changes in physical properties and chemical reactivities such as charge, solubility, ligand exchange rates, metal–ligand binding forces, redox potentials at the base metal and ligand, and ligand conformations [3,4,5,6]. In addition, ligands can be modified to contribute to biological activity [7,8]. In this context, the use of transition metal (e.g., ruthenium and osmium) complexes is increasing due to the intrinsic characteristics of the metal atom that has a partially filled d subshell or which can give rise to cations with an incomplete d subshell [9,10,11,12]. This characteristic may provide interesting photophysical and chemical properties, which include strong luminescence, high chemical and photophysical stability, and high production of singlet oxygen upon light irradiation, which is particularly relevant for photodynamic therapy (PDT) [13,14,15,16,17].
In this review, we summarize key information on the major metal-based PSs depending on their known modes of action (genotoxic vs. DNA-independent cytotoxicity), present the efforts made to improve a more targeted delivery of PSs, and discuss in more detail their interest in modulating the immune antitumor response via their pro-immunogenic properties. Importantly, this review does not aim to present an exhaustive catalog of metal-based PSs, but specific examples that were chosen to illustrate the points discussed below.

By definition, PDT uses a light-activable chemical, the “PS”, whose cytotoxic activity requires both activation by light, usually in the visible spectrum, and the presence of oxygen to produce singlet oxygen (1O2) and/or other reactive oxygen species (ROS) [18]. More specifically, the PDT effect relies on the excitation of the PS to first reach a singlet excited state that then undergoes intersystem crossing (ISC) to reach a triplet state (Figure 1). This latter sensitizes cytotoxic singlet oxygen (1O2) through a Type II energy transfer or participates in Type I electron transfer reactions to generate other reactive oxygen species (ROS, e.g., hydroxyl radicals and superoxide radicals). The Type II mechanism is accepted as the predominant pathway for most of the currently approved PSs. For a more detailed review about the basic principles of PDT, see [19] and the references therein.
The singlet oxygen-driven cytotoxicity during PDT mainly relies on oxidation mechanisms that lead to the degradation of amino acids, certain DNA nucleic bases, and lipids composing cell membranes and the mitochondria, which ultimately triggers different kinds of cell death, including necrosis, apoptosis, paraptosis, and autophagy [20,21,22] (Figure 2).
The light-dependent cytotoxicity of the PS is, therefore, at the base of the principle of PDT, which usually relies on the systemic intravenous injection of the PS. However, activation of the PS is normally made locally by illumination with low-powered laser light (the exception being daylight PDT [23]). The advantages of PDT over other therapies are, therefore, the high spatiotemporal control and the low systemic toxicity of the treatment. PDT currently has several indications in different cancer types, including obstructing esophageal cancer, locally advanced, non-curable head and neck squamous cell carcinoma (HNSCC), non-small-cell lung cancer, prostate cancer, and superficial basal cell carcinoma [24,25,26,27,28] (Table 1). The main PSs used clinically are derivatives of porphyrin. However, organic PSs may display poor water solubility and/or their maximum excitation wavelength may not penetrate deeply enough in tissues, making them unsuitable for the treatment of deep-seated cancer lesions [29]. Metal-based PSs, therefore, offer an interesting flexibility of ligands that can potentially improve these issues. Moreover, a current limitation of PDT is the skin photosensitivity caused by the accumulation of a PS in skin cells [30]. The use of nanoparticles that allows for a more specific delivery of PSs to tumor cells has been developed in recent years to address this limitation [31,32].

3. Major Metal-Based Photosensitizers and Their Mode of Action

Metal-based PSs have a promising potential for application as PDT-based anticancer drugs. More particularly, their ability to induce an inflammation and modulate the tumor immune microenvironment shows that they may be used in synergy with ICI immunotherapies. However, several limitations or obstacles need to be overcome in the future to accelerate their transfer to routine tumor management. Some of these limitations, including water solubility and optimal maximal excitation in the NIR region, can be tackled through the design of innovative chemical complexes by combining metals to new ligands that might enhance the performances of the PSs. Targeted delivery of PS to tumor cells is also an important goal to achieve in order to avoid sun/light sensibility, which remains a major drawback of PDT, limiting a broader application. Targeted PS delivery could, therefore, be achieved by using bioconjugates where metal-derived compounds are complexed to antibodies that target tumor antigens used in the clinic (e.g., the cetuximab anti-epidermal growth factor receptor (EGFR) or the trastuzumab anti-human epidermal growth factor receptor-2 (HER-2) antibodies). In vivo data, which are generally missing, will confirm whether this is a viable option. Lastly, to properly use PDT in combination with immunotherapy for a personalized therapy, a more detailed understanding of the mode of action of metal-based PDT compounds is required. For instance, the molecular mechanisms that underlie the induction of ICD upon metal-based PDT, especially the signaling pathways that are functionally required for the emission of DAMPs, are still ill-defined. More specifically, it is still not clear whether the induction or the ER stress is functionally necessary and/or sufficient to trigger the plasmic membrane relocalization of ER-resident chaperones. In addition, the immune landscape of the tumor microenvironment is both complex and heterogeneous; it is composed of a large repertoire of immunosuppressive (responsible for tolerance) and cytotoxic (responsible for cancer cell elimination) infiltrating immune cells, in their respective abundances, showing complex interactions through the secretion of cytokines and chemokines. It remains to be determined whether the composition of a tumor immune landscape impacts the therapeutic efficiency of metal-based PDT, and to what extent PDT-related ICD influences this tumor immune microenvironment. Thorough research programs that address these issues must be carried out in order to not only gain a better comprehension of these phenomena, but also uncover potential resistance mechanisms and additional synergistic therapeutic approaches. These efforts might eventually help PDT based on metal PSs to cross the gap from bench to bedside.

Writing—original draft preparation, A.C.J. and F.M.-B.; visualization, A.C.J. and C.T.; writing—review and editing, C.T., G.G. and C.G. All authors have read and agreed to the published version of the manuscript.

This work was financially supported by an ERC Consolidator Grant PhotoMedMet to G.G. (GA 681679) and by the ITMO Cancer AVIESAN (Alliance Nationale pour les Sciences de la Vie et de la Sante/National Alliance for Life Sciences and Health) within the framework of the Cancer Plan (G.G., C.G. and A.J.); it also received support under the program “Investissements d’ Avenir” launched by the French Government and implemented by the ANR with the reference ANR-10-IDEX-0001-02 PSL (G.G.). The group of C.G. is financially supported by the Institut Thématique Interdisciplinaire Innovec, the Institut National du Cancer, ITMO-Cancer Aviesan, the French national Ligue contre le Cancer and the European Union COST Action ProteoCure (C.G. & A.C.J). 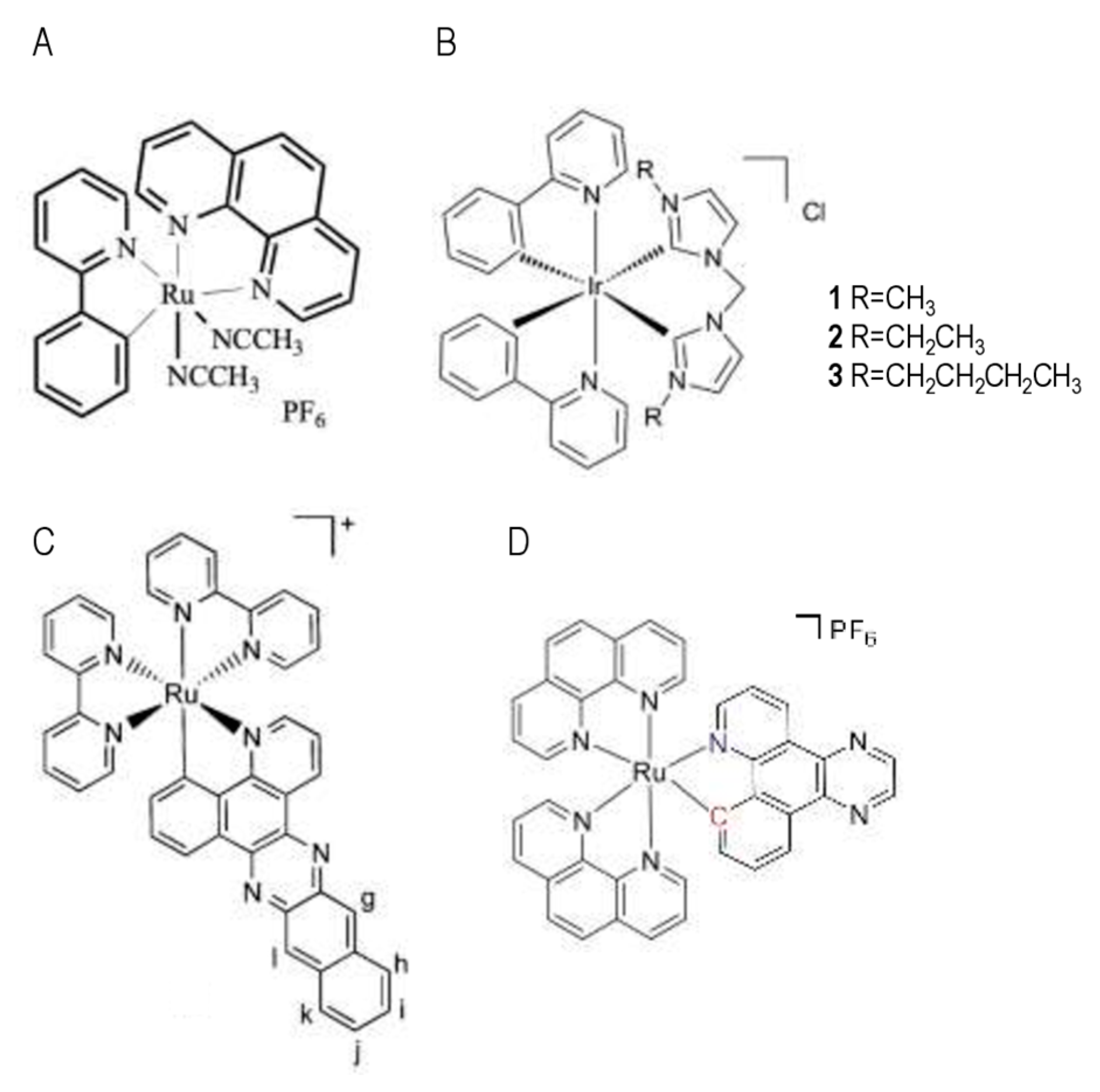