Following the discovery of cisplatin over 50 years ago, platinum-based drugs have been a widely used and effective form of cancer therapy, primarily causing cell death by inducing DNA damage and triggering apoptosis. However, the dose-limiting toxicity of these drugs has led to the development of second and third generation platinum-based drugs that maintain the cytotoxicity of cisplatin but have a more acceptable side-effect profile. In addition to the creation of new analogs, tumor delivery systems such as liposome encapsulated platinum drugs have been developed and are currently in clinical trials. In this study, we have created the first PEGylated liposomal form of nedaplatin using thin film hydration. Nedaplatin, the main focus of this study, has been exclusively used in Japan for the treatment of non-small cell lung cancer, head and neck, esophageal, bladder, ovarian and cervical cancer. Here, we investigate the cytotoxic and genotoxic effects of free and liposomal nedaplatin on the human non-small cell lung cancer cell line A549 and human osteosarcoma cell line U2OS. We use a variety of assays including ICP MS and the highly sensitive histone H2AX assay to assess drug internalization and to quantify DNA damage induction. Strikingly, we show that by encapsulating nedaplatin in PEGylated liposomes, the platinum uptake cytotoxicity and genotoxicity of nedaplatin was significantly enhanced in both cancer cell lines. Moreover, the enhanced platinum uptake as well as the cytotoxic/antiproliferative effect of liposomal nedaplatin appears to be selective to cancer cells as it was not observed on two noncancer cell lines. This is the first study to develop PEGylated liposomal nedaplatin and to demonstrate the superior cell delivery potential of this product. View Full-Text
Keywords: chemotherapeutics; liposomes; platinum drugs; nedaplatin; DNA repair; cancer treatment chemotherapeutics; liposomes; platinum drugs; nedaplatin; DNA repair; cancer treatment
►▼ Show Figures 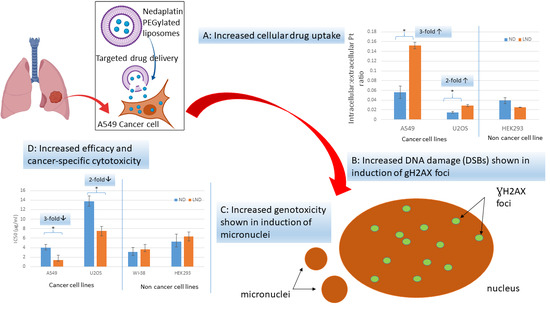