Ezetimibe (EZ) is a poorly water-soluble drug with low bioavailability. Strategies such as solid dispersions (SD) and micellar systems (MS) were developed to identify the most effective drug delivery formulations with the highest oral bioavailability, and to improve their lipid-lowering effect. The EZ formulations were prepared with different proportions of Kolliphor® RH40 as a surfactant (1:0.25, 1:0.5 and 1:0.75) and croscarmellose as a hydrophilic carrier. These excipients, and the addition of microcrystalline cellulose during the production process, led to significant improvements in the dissolution profiles of MS. Powder X-ray diffraction (PXRD), differential scanning calorimetry (DSC) and scanning electron microscopy (SEM) revealed an amorphous form of ezetimibe with different semicrystalline states of microcrystalline cellulose for MS-I (1:0.75) and MS-II (1:0.75). Pharmacokinetic analysis after administration of MS-II (1:0.75) demonstrated a 173.86% increase in maximum plasma concentration (Cmax) and a 142.99% increase in oral bioavailability compared to EZ raw material (EZ-RM). Efficacy studies with the micellar system MS-II (1:0.75) in rats with hyperlipidemia showed that total cholesterol, triglycerides and high-density lipoprotein were reduced to normal levels and revealed improvements in low-density lipoprotein, aspartate and alanine aminotransferase. The improvement in the dissolution rate with micellar systems increases bioavailability and enhances the anti-hyperlipidemic effect of EZ. View Full-Text
Keywords: ezetimibe; solid dispersion; micellar systems; enhanced dissolution; oral bioavailability; antihyperlipidemic effect ezetimibe; solid dispersion; micellar systems; enhanced dissolution; oral bioavailability; antihyperlipidemic effect
►▼ Show Figures 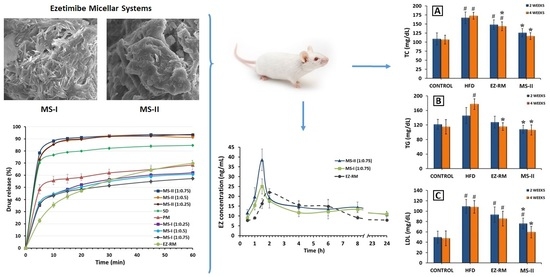