Optimal Connection for Tiotropium SMI Delivery through Mechanical Ventilation: An In Vitro Study

We aimed to quantify Soft Mist Inhalers (SMI) delivery to spontaneous breathing model and compare with different adapters via endotracheal tube during mechanical ventilation or by manual resuscitation. A tiotropium SMI was used with a commercial in-line adapter and a T-adapter placed between the Y-adapter and the inspiratory limb of the ventilator circuit during mechanical ventilation. The SMI was actuated at the beginning of inspiration and expiration. In separate experiments, a manual resuscitator with T-adapter was attached to endotracheal tube, collecting filter, and a passive test lung. Drug was eluted from collecting filters with salt-based solvent and analyzed using high-performance liquid chromatography. Results showed the percent of SMI label dose inhaled was 3-fold higher with the commercial in-line adapter with actuation during expiration than when synchronized with inspiration. SMI with T-adapter delivery via ventilator was similar to inhalation (1.20%) or exhalation (1.02%), and both had lower delivery dose than with manual resuscitator (2.80%; p = 0.01). The inhaled dose via endotracheal tube was much lower than inhaled dose with spontaneous breathing (22.08%). In conclusion, the inhaled dose with the commercial adapter was higher with SMI actuated during expiration, but still far less than reported spontaneous inhaled dose. View Full-Text
Keywords: Soft mist inhaler; mechanical ventilation; adapter; inhaled dose; in vitro Soft mist inhaler; mechanical ventilation; adapter; inhaled dose; in vitro
►▼ Show Figures 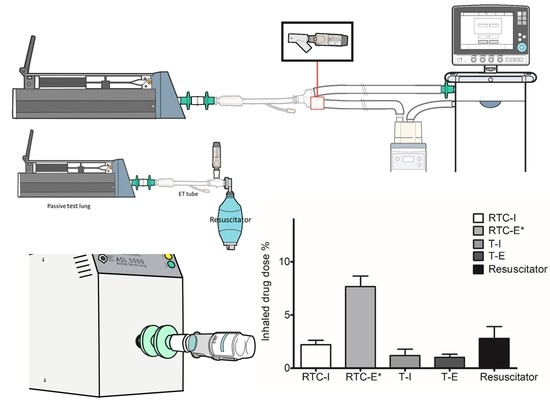