Diseases in the respiratory tract rank among the leading causes of death in the world, and thus novel and optimized treatments are needed. The lungs offer a large surface for drug absorption, and the inhalation of aerosolized drugs are a well-established therapeutic modality for local treatment of lung conditions. Nanoparticle-based drug delivery platforms are gaining importance for use through the pulmonary route. By using porous carrier matrices, higher doses of especially poorly soluble drugs can be administered locally, reducing their side effects and improving their biodistribution. In this study, the feasibility of mesoporous silica particles (MSPs) as carriers for anti-inflammatory drugs in the treatment of airway inflammation was investigated. Two different sizes of particles on the micron and nanoscale (1 µm and 200 nm) were produced, and were loaded with dexamethasone (DEX) to a loading degree of 1:1 DEX:MSP. These particles were further surface-functionalized with a polyethylene glycol–polyethylene imine (PEG–PEI) copolymer for optimal aqueous dispersibility. The drug-loaded particles were administered as an aerosol, through inhalation to two different mice models of neutrophil-induced (by melphalan or lipopolysaccharide) airway inflammation. The mice received treatment with either DEX-loaded MSPs or, as controls, empty MSPs or DEX only; and were evaluated for treatment effects 24 h after exposure. The results show that the MEL-induced airway inflammation could be treated by the DEX-loaded MSPs to the same extent as free DEX. Interestingly, in the case of LPS-induced inflammation, even the empty MSPs significantly down-modulated the inflammatory response. This study highlights the potential of MSPs as drug carriers for the treatment of diseases in the airways. View Full-Text
Keywords: mesoporous silica particles; pulmonary drug delivery; poorly soluble drugs mesoporous silica particles; pulmonary drug delivery; poorly soluble drugs
►▼ Show Figures 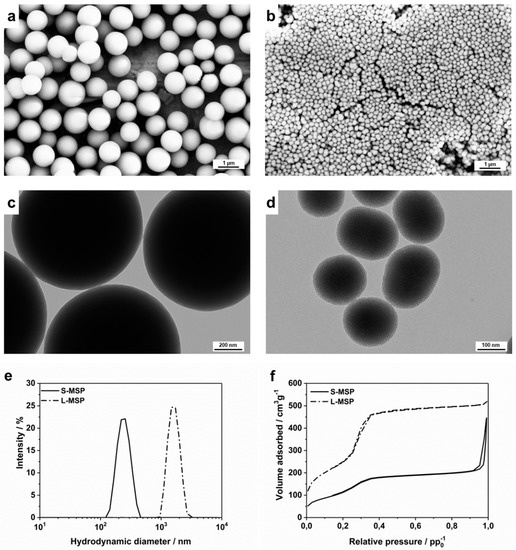