Both aptamers and siRNA technologies have now reached maturity, and both have been validated with a product in the market. However, although pegaptanib reached the market some time ago, there has been a slow process for new aptamers to follow. Today, some 40 aptamers are in the market, but many in combination with siRNAs, in the form of specific delivery agents. This combination offers the potential to explore the high affinity and specificity of aptamers, the silencing power of siRNA, and, at times, the cytotoxicity of chemotherapy molecules in powerful combinations that promise to delivery new and potent therapies. In this review, we report new developments in the field, following up from our previous work, more specifically on the use of aptamers as delivery agents of siRNA in nanoparticle formulations, alone or in combination with chemotherapy, for the treatment of cancer.
Keywords: siRNA; aptamers; cancer; nanoparticles siRNA; aptamers; cancer; nanoparticles

Small interfering RNA siRNA suppress expression of genes by targeting the mRNA expression. Targeted delivery of siRNA to specific cells is highly desirable for safe and efficient RNAi-based therapeutics [1]. However, the half-life of nucleic acids in the bloodstream is short due to the degradation by endo or exonucleases and rapid clearance [2]. One strategy to solve this challenge is developing siRNA delivery systems. Nanoparticles can be defined as particles less than 100 nm in diameter, these systems can be composed by different materials and are employed according to their purpose [3,4]. For this area, the most widely used systems are polymeric particles, nanoemulsions, nanocrystals, solid lipid nanoparticles, and liposomes [5]. The organic particles used for drug delivery application are micelles, liposomes, polymers, dendrimers, and nanogels. They have versatile surface building blocks for efficient endocytosis and loading [6]. There are numerous advantages to using nanoparticles: (I) Increased bioavailability, (II) dose proportionality, (III) decreased toxicity, (IV) smaller dosage form, (V) stability of drugs dosage forms, and (VI) increased active agent surface area resulting in a faster dissolution [7]. Ideally, nanoparticles should be stable in circulation to protect and deliver their therapeutic load (drug) into recipient tissue; have good penetration and retention in the target tissue so that drug release occurs within the therapeutic window; and ultimately be organically excreted to avoid long term accumulation toxicity [8]. Approaches to drug targeting and delivery may be facilitated by the enhanced permeability and retention (EPR) effect. This effect occurs due to the large endothelial tissue fenestrations which are characteristic of the rapid growth of tumor blood vessels. Therefore, the nanoparticles passively diffuse through the microenvironment targeting the tumor tissues [8].
Although nanocarrier technology has improved, its lack of target specificity limits its widespread use, to overcome this issue and address the lack of specificity is the generation of functionalized nanoparticles, i.e., second generation nanoparticles [8]. Nanoparticle surface functionalization occurs through the fixation of a ligand that interacts with specific tissue-specific receptors, to optimize the administration of the target, selectively transporting it to the binding site [9]. One of the advantages of taking drugs directly to specific tissues is the ability to use relatively more toxic and efficient drugs with less risk of collateral damage to other body tissues. In the case of cancer, drugs could be targeted at tumors, avoiding the systemic side effects of traditional therapies. The functionalization includes surface conjugation of chemicals or bio molecules, like folic acid, biotin molecules, peptides, antibodies, aptamers, short, single stranded RNA or DNA oligonucleotides, proteins, and oligosaccharides, to enhance the properties and hit the target with high precision [10]. In order to provide targetability, aptamers have been widely used due to (I) their capacity of binding to target proteins with a high affinity and specificity, (II) having already been shown to have antibody-like characteristics, and (III) the fact that they are relatively smaller and less immunogenic. All of these useful properties make aptamers attractive in therapeutic and diagnostic fields [11].

2. Aptamer in the Delivery of Therapeutic Nanoparticles Containing siRNA, shRNA, and miRNA

Immunotherapy has emerged as the best clinical alternative for cancer treatment during the last years. It is mostly based in monoclonal antibodies targeting immunological checkpoint pathways, as well as in genetically-engineered cells that directly attack the tumor, like CAR-T cells. Despite the great success of immunotherapy, it works for 20–40% of the patients, depending on tumor type and disease progression stage [46]. So, other classes of molecules and treatments, such as those based in RNA and aptamers, appeared as good alternatives for cancer immunological treatment.
RNA-based immunotherapy is, in concept, more advantageous than those based in recombinant protein expression platforms. It has lower cost, lower immunogenicity, and better penetration in the tumor tissue, which makes it worth developing. In addition, in the last years, a number of pre-clinical and clinical data proved its efficacy, using both aptamer alone and RNAi conjugates.
Antagonistic and agonistic aptamers, acting similar to monoclonal antibodies, were developed to bind to immunomodulating molecules, such as CTLA-4, PD-1, IL-10 R, and LAG-3. The tetrameric antagonistic aptamer selected for CTLA-4, the first one to be developed, was very effective during melanoma murine model studies in vivo [47]. In the same way, multimeric structures of aptamers were shown to have a better performance for agonistic ligands, bringing them together during the activation. It is the case of OX-40 agonistic aptamer, Pratico et al. constructed a multimerized anti OX-40 aptamer using biotinylation and demonstrated a much better biologic effect than the single aptamer, with increased IFN-© production and proliferation, using peripheral blood mononuclear cells as an in vitro model of T cells’ activation [48].
Some receptors of the immune system have an interesting characteristic: They get internalized after T cell activation as a feedback mechanism of controlling over-stimulation. Taking advantage of this feature, some aptamers have been developed as delivery systems to siRNA. The first one was 4-1BB aptamer used to deliver siRNA to T cells, aiming to disrupt mTOR pathway and attenuate IL-2R signaling in CD8+ T cells, which, in turn, leads to CD8+ T cells persistence inside the tumor site and its elimination [49]. This same aptamer was used to address siRNA for Smad-4, a protein from TGF-β signaling cascade. TGF-β is a key mediator of immune system suppression during progression. This approach was successful in suppressing the negative effect of TGF-βon infiltrating CD8+ cells elicited by vaccination with tumor antigens [50].
Cluster of Differentiation (CD) aptamers also have been shown as good alternatives for RNAi delivery. CD molecules are used traditionally for identification of subpopulations of immune cells during flow cytometry studies and, as well as 4-1BB, are frequently internalized after cells activation. For example, using CD4 aptamers complexed with short hairpin RNAs (shRNA), it was possible to silence ROR©T pathway, the key for TH17 cells development, opening a possibility of treatment for a number of conditions, mainly related to autoimmune diseases [51]. In the cancer field, Soldevilla et al. used the previously developed agonistic CD40 aptamer to construct shRNA-aptamer chimeras to inhibit SMG1, a kinase that is essential for nonsense-mediated mRNA decay (NMD) initiation. Mice treated with the CD40 aptamer-shRNA chimera showed higher tumor infiltration of lymphocytes [52,53]. Table 2 summarizes aptamers-siRNAs used for immunotherapy cited in this section.

4. Tumor-Targeted Aptamers Complexed Directly to siRNAs and Other Agents for Cancer Therapy

Today, there are 42 studies in clinical trials using the term “aptamer”, and 64 completed or ongoing studies using the term “siRNA” for treating medical conditions, including: cancer, HIV, and diseases of the immune system (www.clinicaltrial.gov), which indicates that these two therapeutic agents are still on the frontier of knowledge and are tendency in the global market. In a study of market analysis, siRNA and aptamers are the new drugs that biopharmaceutical industries are investing, and the cancer is the most studied disease using this strategy. The global aptamer market was valued at nearly $1.0 billion USD in 2016 and is expected to expand with a CAGR of 20.0% over the period from 2017 to 2025 to attain the value of $5.0 billion USD by the end of 2025. This growth is attributable to technology advances and the introduction of companies at commercial panel. The main players operating in the global aptamer market are AM Biotech (Houston, TX, USA), Aptamer Group (York, UK), Aptamer Sciences Inc. (Gyeongsangbuk-do, Korea), Aptagen LLC (Jacobus, PA, USA), and Base Pair Biotechnologies (Pearland, TX, USA). In regard to siRNA, the therapeutics market is expected to expand significantly until 2025, since the first product approved by FDA is currently available in the market. Major players operating in the global small interfering RNA (siRNA) therapeutics market are GE Dharmacon Lafayette, USA), OPKO Health, Inc. (Miami, FL, USA), Alnylam Pharmaceuticals (Cambridge, MA, USA), Arrowhead Research Corp (Pasadena, CA, USA), Sanofi Genzyme (Cambridge, MA, USA), Genecon Biotechnologies Co., Ltd. (Baesweiler, Germany), Arbutus Biopharma Corp (Burnaby, Canada), Silence Therapeutics AG (London, UK), and Sylentis S.A. (Madrid, Spain) (www.grandviewresearch.com).
Ever since our last revision of the field in 2017 [71], more than 50 new works have been published and revised in this manuscript, which show the potential of this approach. Furthermore, a number of new works have appeared related to nanoparticle formulations of siRNA and other RNA forms, using different types of nanoparticles, and carried successfully by aptamers, whilst some approaches have favored the use of siRNAs in conjunction with chemotherapy agents, with very promising results. A review of some of these technologies in a graphic form is presented in the figure below (Figure 1).
Harnessing the targeting potential of aptamers, together with the silencing power of siRNAs and a long proved cytotoxic effect of chemotherapeutic agents, and bringing them together into a single therapeutic modality, has shown a great co-operative effect. It offers a therapy delivered directly and specifically to the tumor cell, with important proteins for tumor progression or survival silenced, whilst DNA acting cytotoxic agents act on tumor DNA, causing a specific therapy that has the potential to outmatch other approaches that focus on a single modalities. 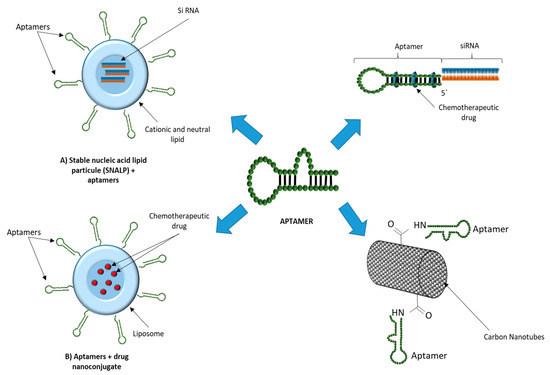 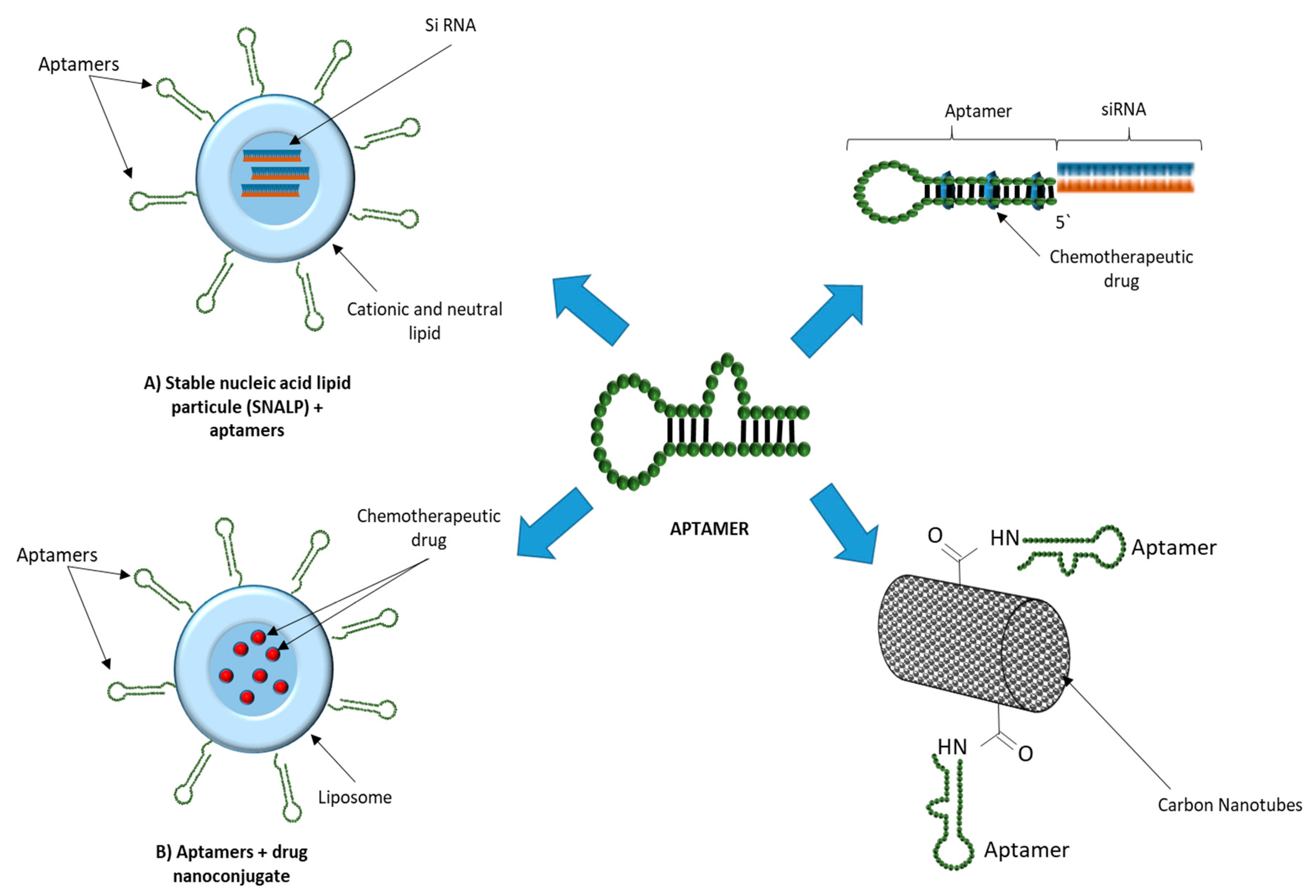 Table 3. Aptamers for delivery SiRNA/chemotherapeutics for cancer therapy.
Table 3. Aptamers for delivery SiRNA/chemotherapeutics for cancer therapy.
© 2019 by the authors. Licensee MDPI, Basel, Switzerland. This article is an open access article distributed under the terms and conditions of the Creative Commons Attribution (CC BY) license (http://creativecommons.org/licenses/by/4.0/).
We use cookies on our website to ensure you get the best experience. Read more about our cookies here.
Accept
We have just recently launched a new version of our website. Help us to further improve by taking part in this short 5 minute survey here. here.
Never show this again