Dutasteride (DUT) is a selective, potent, competitive, and irreversible inhibitor of both type-1 and type-2 5α-reductase (5AR) commonly used in the treatment of benign prostatic hyperplasia and androgenetic alopecia. In the present study, we developed a simple and sensitive high-performance liquid chromatography with fluorescence detection (HPLC-FL) method for simultaneous determination of DUT and its major active metabolite, 6β-hydroxydutasteride (H-DUT). Next, the pharmacokinetic interactions of DUT with ketoconazole (KET), a potent CYP3A inhibitor, were comprehensively investigated. In vivo rat intravenous and oral studies revealed that the pharmacokinetics of DUT and H-DUT were significantly altered by the co-administration of KET. Furthermore, the in vitro microsomal metabolism, blood distribution, and protein-binding studies suggest that the altered pharmacokinetics of DUT could be attributed primarily to the inhibition of the DUT metabolism by KET. To the best of our knowledge, this is the first study to show the drug interaction potential of DUT with azole antifungal drugs including KET, together with a newly developed HPLC-FL method for the simultaneous quantification of DUT and H-DUT. View Full-Text
Keywords: dutasteride; 6β-hydroxy dutasteride; HPLC; fluorescence; ketoconazole; CYP3A dutasteride; 6β-hydroxy dutasteride; HPLC; fluorescence; ketoconazole; CYP3A
►▼ Show Figures 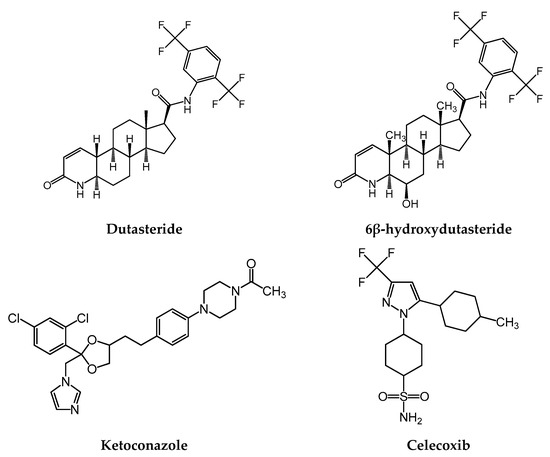