High-throughput sequencing (HTS) has resulted in data for a number of herpes simplex virus (HSV) laboratory strains and clinical isolates. The knowledge of these sequences has been critical for investigating viral pathogenicity. However, the assembly of complete herpesviral genomes, including HSV, is complicated due to the existence of large repeat regions and arrays of smaller reiterated sequences that are commonly found in these genomes. In addition, the inherent genetic variation in populations of isolates for viruses and other microorganisms presents an additional challenge to many existing HTS sequence assembly pipelines. Here, we evaluate two approaches for the identification of genetic variants in HSV1 strains using Illumina short read sequencing data. The first, a reference-based approach, identifies variants from reads aligned to a reference sequence and the second, a de novo assembly approach, identifies variants from reads aligned to de novo assembled consensus sequences. Of critical importance for both approaches is the reduction in the number of low complexity regions through the construction of a non-redundant reference genome. We compared variants identified in the two methods. Our results indicate that approximately 85% of variants are identified regardless of the approach. The reference-based approach to variant discovery captures an additional 15% representing variants divergent from the HSV1 reference possibly due to viral passage. Reference-based approaches are significantly less labor-intensive and identify variants across the genome where de novo assembly-based approaches are limited to regions where contigs have been successfully assembled. In addition, regions of poor quality assembly can lead to false variant identification in de novo consensus sequences. For viruses with a well-assembled reference genome, a reference-based approach is recommended. View Full-Text
Keywords: de novo assembly; reference-based assembly; high-throughput sequencing; single-nucleotide polymorphisms de novo assembly; reference-based assembly; high-throughput sequencing; single-nucleotide polymorphisms
►▼ Show Figures 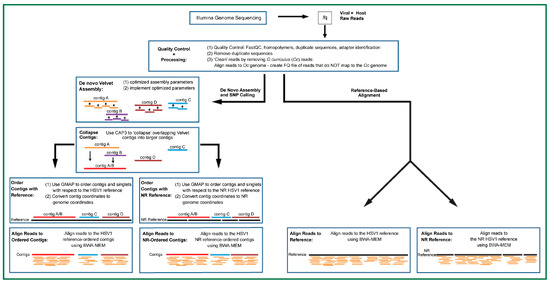