New Paradigms for the Study of Ocular Alphaherpesvirus Infections: Insights into the Use of Non-Traditional Host Model Systems

Enterovirus 71 (EV71) is a common etiological agent of hand, foot, and mouth disease and fatal neurological diseases in children. The neuropathogenicity of severe EV71 infection has been documented, but studies comparing mouse models of severe and mild EV71 infection are lacking. The aim of the study was to investigate the neurovirulence of EV71 strains and the differences in serum cytokine and chemokine levels in mouse models of severe and mild EV71 infection. Nine EV71 isolates belonging to the C4 subgenogroup (proposed as genotype D) displayed infectivity in human neuroblastoma SK-N-SH cells; moreover, ultrastructural observation confirmed viral particle replication. The survival rate of the severe model was 71.43% (5/7), and 60% (3/5) of the surviving severe model mice displayed sequelae of paralysis, whereas the only symptom in mild model mice was ruffled fur. Dynamic detection of serum cytokine and chemokine levels demonstrated that interleukin (IL)-5, IL-13, IL-6, monocyte chemotactic protein 1 (MCP-1), and chemokine (C-C motif) ligand 5 (also called Regulated upon Activation, Normal T-cell Expressed, and Secreted (CCL5/RANTES) were significantly up-regulated at the early period of infection, indicating that these factors might herald a severe outcome. Our findings suggest that elevated cytokines and chemokines may have potential value as prognostic markers in mouse models. View Full-Text
Keywords: enterovirus 71; virulence; cytokine; chemokine; severe and mild mouse models enterovirus 71; virulence; cytokine; chemokine; severe and mild mouse models
►▼ Show Figures 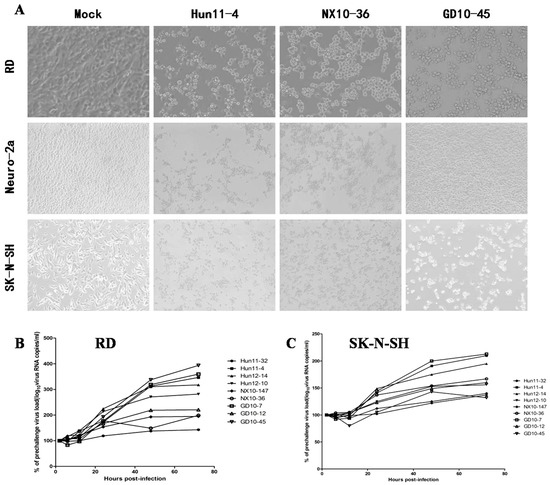