The Bcl-2 Family in Host-Virus Interactions

Programmed cell death or apoptosis is an important component of host defense systems against viral infection. The B-cell lymphoma 2 (Bcl-2) proteins family is the main arbiter of mitochondrially mediated apoptosis, and viruses have evolved sequence and structural mimics of Bcl-2 to subvert premature host cell apoptosis in response to viral infection. The sequencing of the canarypox virus genome identified a putative pro-survival Bcl-2 protein, CNP058. However, a role in apoptosis inhibition for CNP058 has not been identified to date. Here, we report that CNP058 is able to bind several host cell pro-death Bcl-2 proteins, including Bak and Bax, as well as several BH3 only-proteins including Bim, Bid, Bmf, Noxa, Puma, and Hrk with high to moderate affinities. We then defined the structural basis for CNP058 binding to pro-death Bcl-2 proteins by determining the crystal structure of CNP058 bound to Bim BH3. CNP058 adopts the conserved Bcl-2 like fold observed in cellular pro-survival Bcl-2 proteins, and utilizes the canonical ligand binding groove to bind Bim BH3. We then demonstrate that CNP058 is a potent inhibitor of ultraviolet (UV) induced apoptosis in a cell culture model. Our findings suggest that CNP058 is a potent inhibitor of apoptosis that is able to bind to BH3 domain peptides from a broad range of pro-death Bcl-2 proteins, and may play a key role in countering premature host apoptosis. View Full-Text
Keywords: poxvirus; avipoxvirus; apoptosis; X-ray crystallography; isothermal titration calorimetry; Bcl-2 poxvirus; avipoxvirus; apoptosis; X-ray crystallography; isothermal titration calorimetry; Bcl-2
►▼ Show Figures 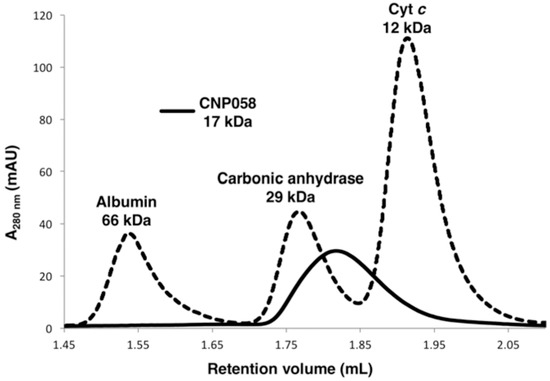